Sen. Elizabeth Warren Warns of Economic Trouble Ahead. Is She Right?

Sen. Elizabeth Warren Warns of Economic Trouble Ahead. Is She Right?

Elizabeth Warren became a household name thanks to her prescient warning of what became a global financial crisis. Now she’s staking her credentials on another forecast of fiscal trauma ahead.

But even economists who like her prescription are skeptical about her diagnosis.

The Democratic presidential candidate published an online essay this week saying that a rise in consumer and corporate debt is imperiling the longest expansion in U.S. history. “Whether it’s this year or next year, the odds of another economic downturn are high and growing,” Warren wrote.

Her prediction could help her win over primary voters by tapping into anxieties about middle-class economic stability despite broad gains over the past decade. But Warren’s opponents could seize on her warning to undermine her credibility should a crash fail to materialize before next year’s election, and some economists sympathetic to her agenda say that â€” for the moment â€” her conclusion of a looming recession is overblown. 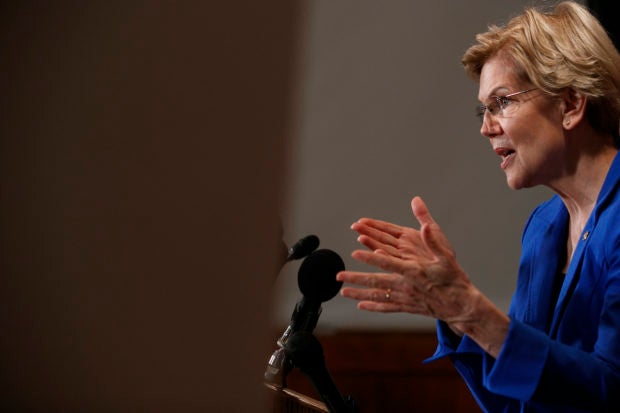 Warren rooted her concerns about the economy in a Federal Reserve report that found a 6.8% increase in household debt over the past decade, allowing the Massachusetts senator to write that American families are “taking on more debt than ever before.” But that figure is not adjusted for inflation, nor is it adjusted for population growth â€” and the number of U.S. households has risen by 9.5% during the same period, meaning that Fed data also shows debt levels have fallen on a per capita basis.

“I don’t see a huge bubble on the other side of household debt that is going to savage people’s assets,” said Josh Bivens, director of research at the liberal Economic Policy Institute.

Recessions are notoriously difficult to forecast. Warren first warned in 2003 about subprime mortgage lending, yet it was roughly five years later when the U.S. housing market fully collapsed. And although her dire forecast echoed in style some warnings made by Donald Trump during the 2016 campaign, Warren hasn’t aligned with him in portraying her election to the White House as the only way to avert disaster.

“I went through this back in the years before the 2008 crash, and no one wanted to listen. So, here we are again,” Warren said in a brief interview on Capitol Hill this week. “I’m trying to point out where the warning signs are. I hope our regulators and Congress listen, make changes, and that the economy strengthens.”

At this juncture, families can afford their debt because of low-interest rates, and that minimizes the risks to the economy. Households are devoting less than 10% of their disposable income to debt service, down from roughly 13% in 2008, according to the Fed. This doesn’t mean that Warren is wrong to conclude that families are burdened by student debt and childcare costs, just that data suggests the debt produced by those expenses is unlikely to cause a downturn. Part of Warren’s forecast hinges on a spike in interest rates that seem unlikely as most benchmark rates have declined since November.

Warren has assembled a litany of proposals aimed at bringing down household debt, through student loan forgiveness and affordable childcare availability as well as a housing plan designed to lower rent costs. She touted her policy agenda â€” which has propelled her higher in the polls â€” as ways to avert her predicted crash.

Warren’s warning of a downturn is a somewhat unique maneuver for a presidential candidate. Past White House hopefuls have waited for the downturns to start before capitalizing on them. Bill Clinton won the presidency in 1992, for example, on a post-recession message summed up by then-adviser James Carville’s edict to focus on “the economy, stupid.”

Warren also warned this week that an increase in corporate borrowing could crush the economy.

But Dean Baker, the co-founder of the liberal Center for Economic and Policy Research, said that the increase in corporate debt has corresponded with higher profits and manageably low-interest rates.

“The idea that you’re going to have this massive cascade of defaults ” it’s very hard to see,” Baker said.

While the economy may not be entering into a recession, many economic forecasters say growth is still slowing because of global and demographic pressures. Evidence of slowing growth has already caused Fed officials to signal that they plan to cut interest rates at their meeting next week, a form of insurance meant to sustain growth. Trump has repeatedly called for the Fed to make even steeper cuts to improve his economic track record.

Michael Markowitz, an economist at the Center for American Progress, said that most predictions about recessions are wrong, not just those offered by politicians.

But he interpreted Warren’s essay as a broader warning about how Trump’s efforts to support growth by curbing regulations and attacking government institutions might eventually be destructive.

“It’s hard to say what a debt-driven problem would look like until it happens,” Markowitz said. “I think it’s also reasonable to elevate concern at the moment given how politicized Trump has made apolitical economic institutions like the Fed. That’s not a free lunch. It creates real risks, so it’s more important than usual to think about what happens if things go bump in the night.”

MOST READ
usa Why 2022 is the year of Ethereum
usa Singer Meat Loaf dies at 74
usa Metaverse tourism – all you need to know
usa English-speaking Filipino youths are ‘left behind’ in French-speaking Quebec
usa Harvard monument glorifies U.S. colonial rule over PH
usa PH-trained nurses in Canada, eager to work but stymied by red tape
usa Top NFL players with the most Super Bowl rings