Back in 2016, after a taste of Bruno Mars’ energetic live show when he served as a musical guest on Saturday Night Live, where he performed his single 24K Magic alongside his new album Chunky, Mars announced his world tour that spanned for two years and 215 shows. 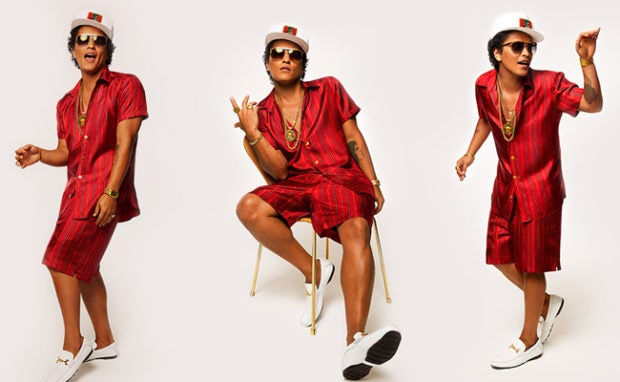 Known for his stage performances, retro showmanship, and for performing in a wide range of musical styles, including R&B, funk, pop, soul, reggae, hip hop, and rock, Bruno Mars is a talented singer, songwriter, multi-instrumentalist, record producer, and dancer.

Heavily inspired by the equivalents of Michael Jackson and Elvis Presley; Mars has proved himself as one of music’s hottest assets. The Hawaiian celebrity, whose real name is Peter Gene Bayot Hernandez, has had an impressive four UK number ones, multiple sell-out tours, plus collaborations with names such as Eminem, B.O.B, Cee Lo Green, and Travie McCoy.

Mars can also be noted with his over the top fashion sense. Notwithstanding his dress sense being ranged from dapper suits to rock and roll outfits, Bruno Mars regularly wears two key pieces to perfection – the Leather Biker Jacket and the Trilby Hat and/or the Fedora. His signature pompadour is also almost always present as he has never been shy about making a fashion statement.

In the video to the song Uptown Funk by Mark Ronson featuring Bruno Mars, the singer had chosen an extraordinary but trendy outfit. It was a pink jacket, a white T-shirt and black trousers. Certainly, the light Fedora finished the look of a singer. Also, he used some chains and bracelets; something that is impossible to see Bruno without these accessories.

As for his musical style and inspiration, Mars states that growing up in Hawaii influenced his style, giving the songs a reggae sound. He explains: “In Hawaii some of the biggest radio stations are reggae. That music brings people together. It’s not urban music or pop music. It’s just songs. That’s what makes it cross over so well. The song comes first.”

With his unique sound comes from his unique voice. Bruno Mars boasts a three-octave tenor vocal range. Jon Caramanica of The New York Times noted that he is one of the most “versatile and accessible singers in pop, with a light, soul-influenced voice that’s an easy fit in a range of styles, a universal donor.”

Aside from his vocal ability, Mars can play many kinds of musical instruments ranging from the drums, guitar, keyboard, bass, and the piano. 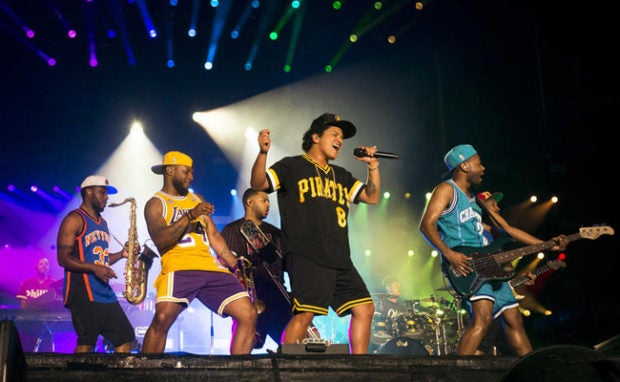 Bruno Mars’ 24K Magic World Tour has legs in Asia, Africa, Europe, and the U.K aside from North America & Latin America. Mars sold-out stadiums and arenas, performing songs ranging from his debut album, Doo-Wops & Hooligans, to more known Mars songs such as Locked Out of Heaven, Uptown Funk, It Will Rain (from The Twilight Saga: Breaking Dawn – Part 1 Soundtrack) and of course, songs from his album, 24K Magic.

Cardi B was originally scheduled to be the special guest for the stops across North America, however, she decided to withdraw before it began due to personal reasons. Consequently, Bruno Mars added Ciara, Charlie Wilson, Ella Mai and Boyz II Men to his tour after Cardi B dropped out of the tour.

After 135 stops across North America, Latin America, and Europe, Mars toured Asia and Africa then ended his 200-date 24K Magic Tour world tour with a three-night stint at the Aloha Stadium in Hawaii, ending off the massive outing on Sunday night with a blow-out for his home state fans.

The 24K Magic World Tour concluded its run grossing over $375 million from 204 shows.

The R&B crooner who collaborated with artists like Mark Ronson, Cardi B, and Ed Sheeran, will also be performing his Best Bruno Mars songs to Las Vegas for a series of select dates at Park MGM, according to an announcement from April 29 to September 14 inside the Park Theater.

What’s Next For Bruno Mars?

Not bad for the 33-year-old singer, right?

With a few live shows this year, the singer confessed in a tweet saying that, “I don’t know what happens next… but I can’t wait to find out.”