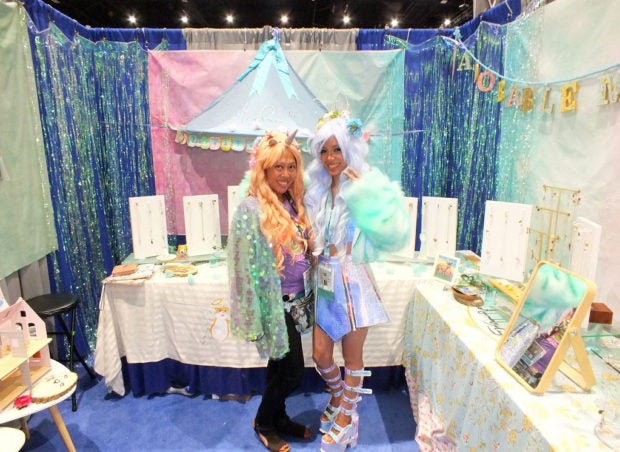 Jewelry master craftswoman Tara Magboo (right) has been designing her line of “Adorable Mayhem” jewelry for over 20 years and during the last 10 years has done well at the SDCC. Her unicorn partner is (left) Jocelyn Fanugao, who works with diamonds. INQUIRER/Florante Ibanez

SAN DIEGO — Filipinos and other Asians were notably among the estimated 130,000 attendees at last week’s San Diego’s International ComicCon (SDCC). But identifying Filipino Americans was rather had because many came as cos-players, that is, in costumes.

Maddy Belle, from Oceanside, California said she just recently started to cosplay and was dressed as Marvel’s Rogue. Asked if she made or bought her cosplay outfits, Maddy replied, ”I spend a lot (of money), I have a shopping problem.”

Chris Bunyi, from Los Angeles was found working at the Cloud Nine Superstore booth just outside the Hard Rock Hotel. He was yelling through a street hazard cone re-imagined as a megaphone. Dressed as a store representative of the NBC Superstore attraction located inside the hotel, Bunyi’s job was as a sidewalk hawker to customers wearing a special NBC wristband that also gave them access to the NBC Brooklyn 99 exhibit located across the street.

Elaine Dolalas and Michael Nailat of “This Filipino American Life” podcast said the last time they attended SDCC was ten years ago, when they were given passes as their wedding present. Elaine, later on Friday spoke on a SDCC panel “Filipinx Voices in Podcasting” hosted by Diverse Geeks in Focus, which was recorded live.

All Fil-Am panelists Gem Vidal (“Diverse Geeks in Focus”), Justin Quizon (“Screen Rant, That Hashtag Show”) and JPG (CEO Geek Say What? Network) spoke about the Philippine diaspora, representation, and their movement to spread information, stories and self-education ourselves. 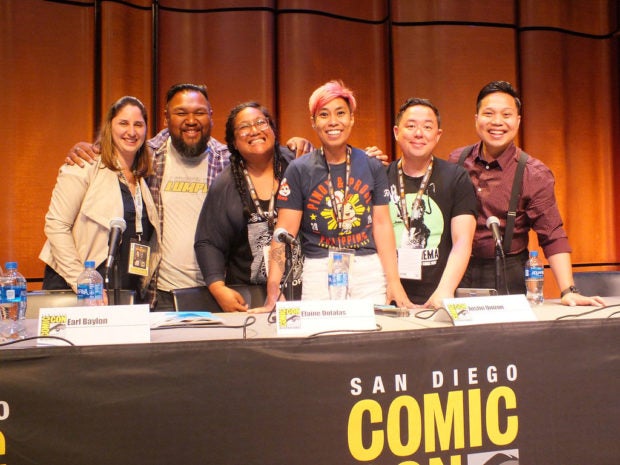 Voice actor Earl Baylon, (“Tomb Raider” series, “Pangeekery”), echoed many on the panel, saying, he had the “responsibility” to “represent our people well.” He also brought up the need to find one’s own tribe of similar minded friends who will support each.

On Saturday, at the National Geographic “Brain Games” Reception/Party at the Hotel Solamar rooftop, Ace Barba, Brent Coraza, Paolo Jimenez, Stephen Jimenez and Brandon Salgado, enjoyed the cool night and refreshments, having come all the way from Sacramento.

Throughout the ComicCon, many Filipino and Fil-Am artists displayed their works. Among them were 14- year-old Ethan Castillo, Whilce Portacio, Genèvieve Santos, Arnel Baluyot, Randy Reynaldo (self-publisher of Rob Hanes Adventures), and the ever-increasingly popular Patrick Ballesteros. A stuffed pillow of brown poop with eyes at furry-feline.com creations was the project of couple Alvin and Cheri Ong, born in Manila now living in Dallas Texas. Use of the word “Pogi” in their marketing gave away their Filipino identity.

Playing ukulele with his regular meetup group was Ian Tolentino, from San Diego. The group is in its third “Sneaky Tiki Super Geeky Ukulele Sing and Play Along” at ComicCon. They meet up to practice twice a month at Fast Times Bar in Clairemont (a San Diego suburb). For their session, they projected the words and melodic chords on a big screen and encouraged the audience to bring their own instruments but also had a few to lend out.

50th anniversary of San Diego International ComicCon was hot, crowded and the lines were long but fun and entertaining at the same time.