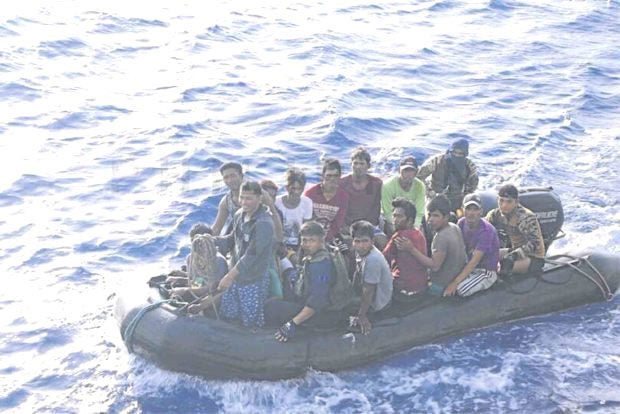 Filipino fishermen rescued after their boat was rammed by a Chinese vessel. PH NAVY

It’s been over 30 days. And the furor, like a storm surge, has not abated.

Initial silence from the normally loquacious President did not help. Nor did the subsequent characterization of it all as a “little maritime incident” make things better. A boggling theory on the migratory behavior and ethnicity of oceanic creatures advanced by the Senate President and blatant gaslighting carried out by the Agriculture Secretary failed like a house of cards, miserably.

On 9 June 2019, 22 Filipino fishermen fell overboard when their fishing boat, the F/B Gem-Ver, which was anchored in the Reed Bank in the South China was rammed and sunk by a Chinese vessel, the Yuemaobinyu 42212. Instead of rescuing the endangered fishermen, as called for by maritime tradition, the Chinese crew turned around and abandoned them.

In fact, beyond common sense and humanitarian decency, several international treaties mandate that mariners give assistance to persons in danger at sea. For example, the Convention for the Unification of Certain Rules of Law Relating to Assistance and Salvage at Sea [Brussels Convention] was adopted in 1910. In response to the Titanic disaster, the International Convention for the Safety of Life at Sea [SOLAS] was adopted in 1914 and has been amended several times since.

In 1989, the Brussels Convention was replaced by the International Convention on Salvage [Salvage Convention] which provides: “Every master is bound, so far as he can do so without serious danger to his vessel and persons thereon, to render assistance to any person in danger of being lost at sea.”

Fortunately, two Filipino crewmen reached TGTG-90983-TS, after two hours of paddling in open sea. The commendable crew of this Vietnamese vessel, which sailed from Tien Giang Province in the southern Mekong Delta, dutifully rescued the Filipinos, who were then turned over to the Philippine Navy and taken aboard BRP Ramon Alcaraz.

On June 20, 2019, Vietnam’s Ministry of Foreign Affairs officially stated that Vietnamese fishermen had rescued the crew of the Filipino fishing boat in compliance with international maritime laws. Spokesperson Le Thi Thu Hang cited both the United Nations Convention on the Law of the Sea (UNCLOS) and the convention of the International Maritime Organization (IMO).

Speculative claims that the Chinese vessel had failed to visualize the Filipino fishing boat because of darkness or fog are unlikely given the availability of radar.  In fact, it has been reported that Chinese vessels plying into Philippine territorial waters are equipped with sophisticated technology. These boats have reinforced hulls for ramming and their crew have had military training.

Another possibility would be that the Chinese boat had turned off their electronic detecting gears.  However, such scenario would only give credence to the likelihood that the Chinese, fully aware that they were fishing illegally in Philippine territory, had intentionally “gone dark,” switching off their radar to cruise undetected. Satellite data, in fact, showed that the Yuemaobinyu was off the grid from April 27 to June 12. It rammed FB Gem-Ver on June 9.

Much has been written about Chinese bullying, incursion and outright annexation of Philippine territories. Likewise, on the decision reached by the Permanent Court of Arbitration at The Hague on July 12, 2016 which ruled in favor of the Philippines. That China had no historic rights to resources within the “nine-dash line” and that China had “breached its obligations under the convention on the International Regulations for Preventing Collisions at Sea and Article 94 of UNCLOS concerning maritime safety.”

Tragically, beyond the incident which risked the lives of 22 Filipinos, the leaders of the Philippine government added insult to injury by abandoning its own citizens in favor of the Chinese.  Notwithstanding the statement by Jay Batongbacal, director of the University of the Philippines Institute for Maritime Affairs and Law of the Sea that a Chinese maritime vessel had “deliberately rammed, sank, and abandoned a Filipino fishing vessel in the West Philippine Sea”, no less than the Philippines’ top diplomat chose instead to shamelessly lay the blame on the Filipinos who he surmised were, like himself,  asleep on the job.

Instead of pursuing a legal and diplomatic course of action, the Philippine government promptly pivoted and betrayed its own citizens, practically mimicking what the smug Chinese crew had done. Worse, they focused on the banal task of brown-nosing Beijing.

What pathetic leaders have we entrusted our nation to?