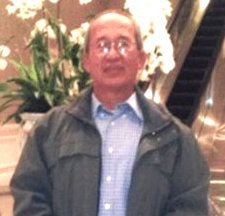 Julius Rondez, 70, was killed by a homeless suspect who is still at large. LADWP PHOTO

LOS ANGELES – A longtime Filipino employee of Los Angeles Department of Water and Power was killed in senseless attack apparently by a homeless suspect.

Julius Rondez, 70, was walking from his office on the 400 block of East Temple, headed to the Metro Gold Line when he was fatally attacked on July 2.He died in the hospital that night, according to a report by KABC.

A throng of his LADWP coworkers, in blue work shirts, filled the pews of St. Dominic’s church in Eagle Rock where loved ones mourned the father of three and the grandfather of five.

Julius Rondez supervised trouble shooting calls when residents had problems with their meter. He was at LADWP for nearly 34 years

The Los Angeles Police Department stated only that the suspect was a man between 20 and 30 years old and possibly homeless. He is still at large

The Rondez family said it wants the suspect caught before he attacks another innocent victim, and that more resources should be used to help the homeless and people with mental health problems.