What Will the Media Find in US Migrant Detention Centers?

What Will the Media Find in US Migrant Detention Centers?

“I’m going to start showing some of these detention centers to the press. I want the press to go in and see them,” Trump told reporters in Morristown, New Jersey. “We’re going to have some of the press go in because they’re crowded, and we’re the ones who were complaining about their crowding,” he added.

These photos are just a glimpse into the horrors I witnessed two days ago. Please see them for yourself and join the call to #CloseTheCamps. This inhumanity is not who we are as a country.https://t.co/AKWOXKaIl0

His comments came after The New York Times and The El Paso Times on Saturday published an article describing a Border Patrol station in Clint, Texas as filled with hundreds of children wearing filthy clothing and packed into disease-ridden cells — a story Trump called a “hoax.”

“The stench of the children’s dirty clothing was so strong it spread to the agents’ own clothing — people in town would scrunch their noses when they left work. The children cried constantly,” the article said.

“One girl seemed likely enough to try to kill herself that the agents made her sleep on a cot in front of them, so they could watch her as they were processing new arrivals.”

The article echoed a Department of Homeland Security (DHS) watchdog report released last week warning of “dangerous overcrowding” in multiple detention facilities, which hold thousands of migrants seeking to remain in the United States, most of whom are fleeing violence and poverty in their Central American homes. 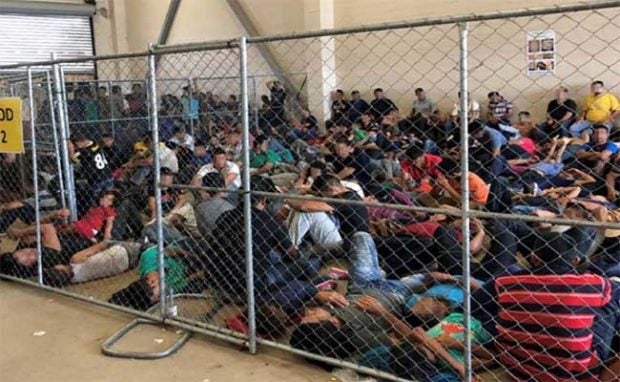 Democratic lawmakers who also visited detention facilities reported massive crowding in cells with no running water, where children and adults lacked access to needed medicines and were deprived of showers for up to two weeks.

Trump had previously expressed little sympathy for migrants in the facilities, saying on Twitter “If Illegal Immigrants are unhappy with the conditions in the quickly built or refitted detentions centers, just tell them not to come. All problems solved!”

Mexico’s national immigration authority said last week deportations had jumped by 33 percent in June, while the DHS said it expects a 25 percent drop in migrants taken into custody along the US-Mexico border in the same month.