Exhibit to tell history of Filipino nurses in Virginia

Exhibit to tell history of Filipino nurses in Virginia 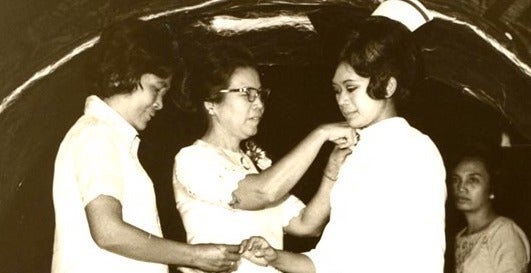 CHARLOTTESVILLE, Virginia — A University of Virginia graduate nursing student raised in Virginia Beach will hold an exhibit, “Culture to Care: The History of Filipino Nurses in Virginia,” starting August 10 at the Philippine Cultural Center in Virginia Beach.

The exhibit is also the topic of nursing graduate Reynaldo “Ren” Capucao’s dissertation graduate, which traces the immigration of Filipino nurses within the context of the U.S. colonization of the Philippines, the growth of the American health care industry and U.S. immigration policies. Ren Capucao, a UVA nursing graduate student, has created an exhibit on Filipino nurses in the U.S., part of the School of Nursing’s “Hidden Nurses” initiative. (Dan Addison/UVA Communications)

With support from UVA Nursing’s Bjoring Center for Nursing Historical Inquiry, the Philippine Nurses Association of Virginia and Virginia Humanities, It will become a permanent part of the School of Nursing’s “Hidden Nurses” initiative, sponsored by the Jefferson Trust – an homage, Capucao said, to the many Filipino nurses who came before him, according to UVA Today.

Filipinos make up just 1% of the American population, but they make up more than 4% of nurses practicing in the U.S. They are the largest group of internationally educated nurses in the U.S.

The wave of Filipino nurse immigrants included Capucao’s mother, Jolly, one of eight children from a rural fishing town to whom “the nurse’s white cap became a symbol of her hopes and dreams,” Capucao told UVA Today.

“I’m not where I am because of chance, but because of a culmination of historical events,” Capucao said. “The reason why I want to become a nurse historian is to venerate my mom, and the stories of unknown nurses who forged the path that I’m able to take.”