NEW YORK — “Atin ang ‘Pinas! China Layas!” (The Philippines is ours! China get out!) has been the rallying cry of the US Pinoys for Good Governance (USPGG) since 2010. It will be heard again in several cities worldwide on July 12 to mark the third anniversary of the Philippines landmark international court victory against China’s sea claims.

The global protests will take place in front of China Consulates or Embassies and key areas in Saipan, Guam, Manila, San Francisco, New York, Scotland, and other cities. 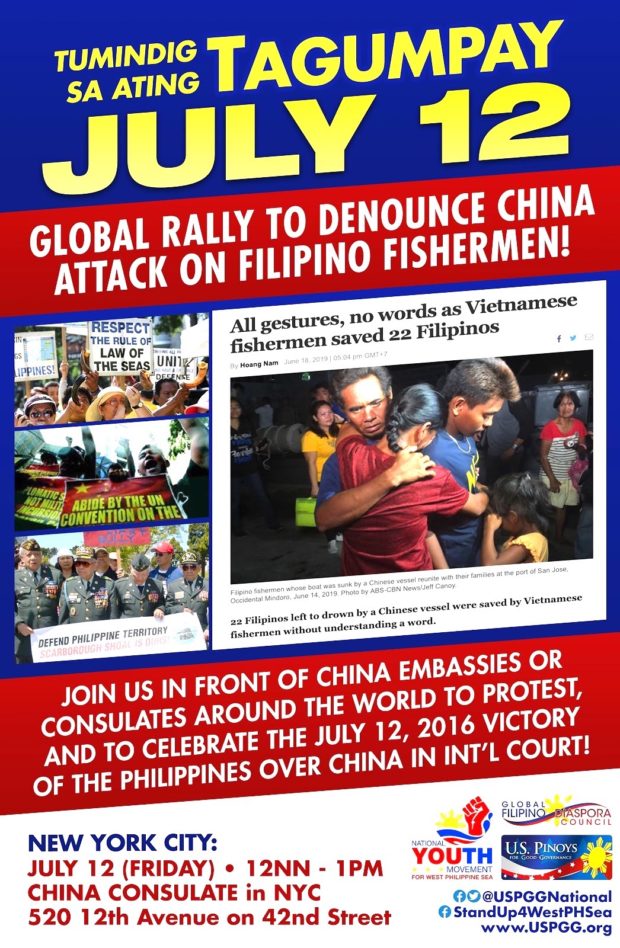 Filipinos’ worldwide protests played a part in prompting the Philippine government to file an arbitration case against China in 2013, which led to a historic victory for the Philippines on July 12, 2016.USPGG and various groups such as the National Youth Movement for the West Philippine Sea (NYMWPS), Global Filipino Diaspora Council, Migrante US and Migrante Youth, Malaya Movement, Network on China’s Aggression on the Philippines (NoCAP) and Bayan USA, will come together Friday, July 12, 2019 to demand that China respect international laws and Philippine sovereignty in the West Philippine Sea, and give justice to Filipino fisher folk being harassed by Chinese vessels in Philippine territory.

Adding fuel to the protests was the ramming-sinking of a Filipino wooden fishing boat by the Chinese Yuemaobinyu 42212, an alleged paramilitary fishing vessel, at Recto Bank around midnight of June 9, 2019, and the abandonment of the Filipino crew.

The incident happened within the Philippines’ Exclusive Economic Zone (EEZ), where the crew of 22 Filipino fishermen almost died after being abandoned by the Chinese vessel in the dark, open sea. After several hours, the Filipinos reached a Vietnamese fishing boat, whose captain rescued them after understanding only these words: “Vietnam. Philippines. Friends.”

The groups representing Filipinos from different sectors, also expressed their disappointment with how President Duterte and his cabinet members handled the affair — with PRRD even revealing that he had made a “verbal agreement” with China’s Xi Jinping, to let Chinese vessels fish in Philippine waters in exchange for loans and other undisclosed privileges.

“This deliberate act of aggression against Filipino fishermen is part of the bullying tactics of China to intimidate and coerce Filipino fishermen away from our own rich fishing grounds,” said Atty. Ted Laguatan, spokesperson for USPGG. “It is so sad that the Philippine President Rodrigo Roa Duterte is a puppet of China, and has ceded control of Philippine territories to the Chinese, clearly betraying and not protecting his own people.”

For more information on times and venues for the rallies, visit the USPGG Facebook page @USPGGNational or their website, www.USPGG.org.