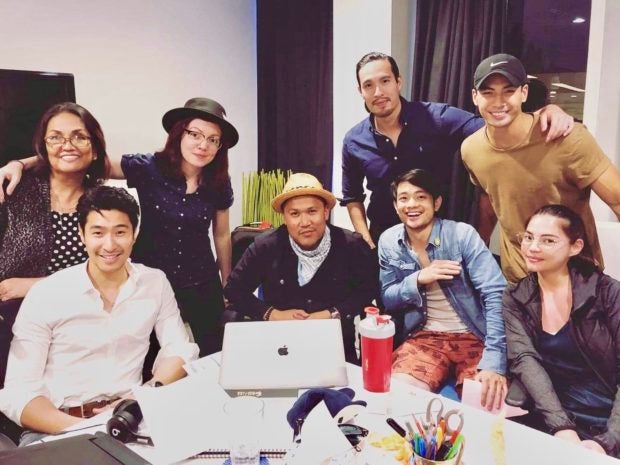 NEW YORK—Filipino British filmmaker Andrea Walter was in town recently for the SOHO International Film Festival NYC, where her directorial debut “Empty By Design” was the opening film.

Co-produced by Joanne Cabalda Banaga, the film tackles the homecoming experience of two millennials who grew up overseas. Returning to the Philippines in order to reconnect with their roots don’t quite measure up to expectations as cultural gaps begin to boggle their minds.

Banaga was thrilled to be “part of a team who you can collaborate [with] to tell a good story… and in the end, gain the respect of your peers in the industry .”

INQUIRER.net’s New York correspondent Elton Lugay caught up with both Walter and Cabalda during the SOHO film fest. Excerpts from the interview with Walter last June 21:

INQ: On a personal level, what kind of fulfillment did you get after doing the movie?

Andrea Walter (AW): I fully understood that I’m more Filipino than I think I am. Kasi, growing up, looking this Caucasian, being mixed race, I always felt like an outsider. And in the process of filming, I understood from screenwriting all the way to shooting all the way to editing, you’re really Filipino. It, personally for me, made me feel I was actually welcomed at home. And to see so many Filipinos come out to watch the movie and support the film, it’s very heartwarming!

INQ: What are you hoping to achieve from doing this movie, especially since you shot this in the Philippines and it talks about two millennials growing up overseas and coming back to reconnect with their roots. How much of that story is related to you somehow?

AW: A lot of it is related to me ‘cause I grew up in so many different countries with parents from different backgrounds. What I what I want people to take from the film especially the Filipinos, OFWs and all of that, is that I want them to understand it’s okay to come home and feel kind of lost. ‘Cause at one point you’ll understand this is home.

I met a lot of Filipinos abroad who are scared to come home and they’re scared to reconnect with their culture. They don’t feel a part of it. I also meet a lot of Filipinos in the Philippines who are scared to venture out. And I want everyone to understand that we now live in this global world. It’s okay to try new things and feel lost. It’s okay to feel foreign. You know, try it, because at one point you’re going to find something about yourself and about that culture.

INQ: What do you say to those Filipinos who are born overseas and are not as proud as you are? Why do you think there’s this dilemma or fear of being identified as a Filipino?

AW: Well, I think with Filipinos that are abroad and they’ve never grown up in the Philippines, I think they’re kind of scared because they’ve never been there and they don’t see themselves. And one of the biggest things I’ve found [in] making this film is that when I show it to the Filipino-Americans, they start to understand what it’s like to be in the Philippines as a Westerner. And the problem I’m seeing–it’s a bigger problem–is that, it’s not just Filipinos, but there’s not enough Asians on camera, onscreen, and behind screen. So once we start to populate ourselves onscreen, they’ll start to be proud to be Filipino. Kasi, like, nowadays, all they see in the media is politics. And the only other Filipino they see is maybe Lea Salonga. They need to see themselves. You know, when Crazy Rich Asians came out, we started to see ourselves onscreen. So what I want to do with my group is the same thing. I want to let Filipinos see that you’re there too! You exist! You’re validated! And then come home and see what it’s like!

INQ: Is there any message you want to give to the Filipino audience in New York?

AW: I appreciate New York a lot. It feels a lot like London, and it also feels a lot like Manila. It’s this big concrete world and I really like it. I think as Filipinos in New York, we should come together and find each other so that they can really learn to appreciate themselves and not feel so disconnected. Just because you’re not living in the Islands, doesn’t mean the islands is not with you. I take it with me wherever I go. I live in LA, I live in London, I live in Manila. I think if I could do it, they could do it as well.

INQ: Was Rhian [Ramos, the lead actress] a personal choice?

AW: Yeah, Rhian was a personal choice. Originally, I had Jasmine Curtis but due to scheduling [conflicts], I had to switch it. But, you know, it’s a good happenstance.

INQ: If there’s one biggest challenge or hurdle that you encountered from doing the movie in the Philippines, what would it be?

AW: I think the biggest challenge was the weather. Kasi, I wanted to shoot when it was monsoon season ‘cause I wanted the look of the rain, with the rain on the ground. But also that comes with problems, you have to stop filming. So, I think the biggest challenge was weather. And I blame myself for that mostly ‘cause I grew up in the Philippines, and I should know. I was born and raised there. I should know better. But, you know, aside from that, there were no challenges. It’s so nice working at home!

INQ: It’s nice that you really brought them to the Philippines. It’s a huge pride for all of us.

AW: Yeah, the biggest thing I really want aside from my career, my colleagues’ careers is I want people to see Filipino cinema, the way that they recognize Chinese, Japanese [or] Korean cinema. Whenever you say that there’s this Korean film, everyone will say, “Oh, that’s so exciting!” But you say Filipino film and no one says anything! I want the rest of the world to respect us, Southeast Asians, [in] the same way they respect my other culture, England. I want us in the same world.

INQ: Was there a stereotype that was portrayed in the movie…  A Filipino stereotype?