From a US general’s letter to a Congressional Gold Medal

From a US general’s letter to a Congressional Gold Medal

SAN FRANCISCO — Magdaleno Duenas was a young, energetic Filipino in his late twenties when he joined the guerilla forces in 1943. He was part of the Filipino team that helped 10 U.S. soldiers escape capture by the Japanese imperial army. Acknowledging his wartime efforts during the war, General Austin Shofner, one of the U.S. officers who successfully escaped, wrote a letter to Mr. Duenas thanking him for saving his life.

The one-page letter handwritten by Gen. Shofner himself described in detail how Mr. Duenas helped them walk through the jungles from Davao to Medina. He said that Mr. Duenas remained the most valuable man who helped them escape. “I can never repay you for all you did for me while I was in Mindanao,” Gen. Shofner wrote.

Mr. Duenas kept this one-page letter in a safe place, and he carried it with pride as proof of his service during the war. When I met him in 1993, in Richmond, California, he was one of those who had naturalized based on the Immigration Act of 1990. A consultant helped him come to the United States. Unfortunately, he was made to work menial jobs against his will until community members helped him “escape” from his deplorable condition in Richmond. The letter from Gen. Shofner went with him. To him it was his badge of honor.

In 2005, at the age of 92, Mr. Duenas passed away in San Francisco, California. He had no immediate family. He never married legally and had no descendants. With his passing, he carried with him the dignity and honor of having served the United States during World War II, proven by his possession of a letter from Gen. Shofner.

Of the 260,000 Filipinos who joined the USAFFE, 26,000 became naturalized U.S. citizens. An estimated 2,600 are still alive in the United States and their number is diminishing. Last week S. 1555, an Act to award a Congressional Gold Medal collectively to the Filipino veterans of World War II, in recognition of their dedicated wartime service, was approved by the House of the Representatives.

With both chambers passing this bill, President Barack Obama is expected to sign it into law. Once this is signed into law, a gold medal will be awarded collectively to eligible Filipino war veterans of World War II. This gold medal is the highest civilian award granted by the US Congress and a long overdue recognition of their service and sacrifice during World War II. It should have been awarded when hundreds of thousands of them were still around to receive the recognition. 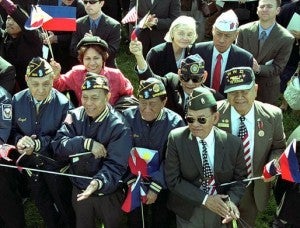 If Mr. Duenas had been proud to receive a letter from Gen. Shofner recognizing his contribution during the war, he would have most probably be more pleased to receive a “gold” medal of recognition from the U.S. Congress. Unfortunately, like him thousands of his comrades are no longer present to witness the much-delayed recognition. Nonetheless, there are still surviving veterans who are looking forward to receiving their gold medals. Time is not on their side.

Hopefully, President Obama will sign S. 1555 into law, and a Congressional Gold Medal design is initiated soon so that more of our Filipino veterans will have the opportunity to see the presentation of this medal. To the many veterans who will no longer have the chance to be proud of this recognition, we as a community are forever grateful to you who sacrificed your lives for our freedom.

(Atty. Lourdes Santos Tancinco, Esq. is a veteran advocate, President of the Veterans Equity Center and an immigration attorney with the Tancinco Law Offices, a San Francisco CA based law firm. She may be reached at 1 888 930 0808, [email protected] , facebook.com/tancincolaw, or through her website www.tancinco.com).