CHICAGO – Prominent Philippine Historian Dr. Ambeth Ocampo revealed the human side of Dr. Jose Rizal at his lecture, “Rizal: The Hero as a Traveler

“Heroes were human like you and me,” Ocampo told his audience at Seafood City Market Mix Place on June 11. “Our problem is that Rizal has become a far- fetched star. To know Rizal is to know what it is like to be Filipino.”

Ocampo’s wit, humor and mastery of Rizal combined to make historical facts and information much more interesting. Not only did Ocampo let Rizal speak and come alive with trivia and insights about the hero’s all-too-human side, but he also shared a profound understanding of how Rizal came to be acclaimed as a national hero and how the Filipino nation emerged from the inspiration our revolutionary heroes derived from his life, his works and his martyrdom.

Ocampo reminded listeners that Rizal was a cosmopolitan in his days. He traveled to Europe, Asia and the U.S. including a stopover in Chicago on May 11, 1888.  He learned to read the Bible in Hebrew. He drew detailed architecture and skylines of cities he visited.

Rizal learned to love his motherland more when he was abroad, Ocampo explained. Do Rizal’s experiences have anything to teach today’s Filipino OFWs and immigrants?

“It would be helpful to read Rizal’s letters because the expatriate Filipinos in Europe in his time shared many traits with OFWs and immigrants today,” Dr. Ocampo suggested.

Ocampo expressed frustration with Filipinos who don’t take advantage of reading and getting to know Rizal’s works such as his two novels, Noli Me Tangere and El Filibusterismo.

Ocampo suggests that there is much to be drawn from Rizal’s genius and extraordinary humanity that can help Filipinos as a nation and as individuals live with honor, dignity and respect, and with supreme confidence toward the future.

“It is sad that Rizal wrote a lot for a nation and countrymen who do not read him,” he surmised in an email interview with PINOY. 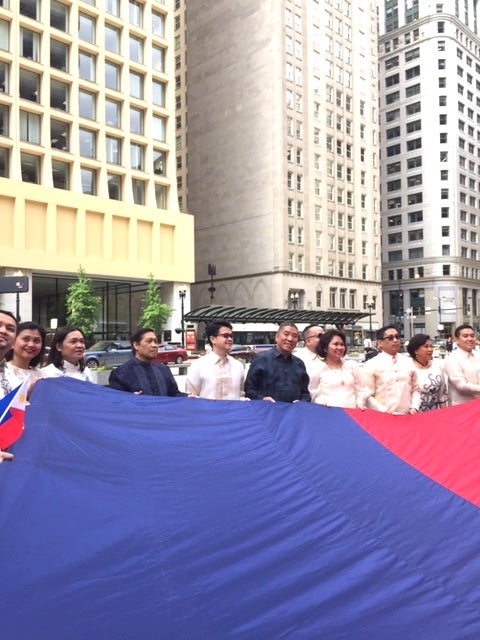 Ocampo was invited by Consul General Gina A. Jamoralin and his trip is also considered a major Sentro Rizal project co-sponsored by the National Commission for Culture and the Arts (NCCA) in Manila.

He kicked off his visit with a floral offering at the Rizal monument in Margate Park on this city’s north side, accompanied by Jamoralin and officials of the Knights of Rizal (KR) and leaders of the National Federation of Filipino American Associations (NaFFAA), Filipino American National Historical Society (FANHS) and Philippine American Cultural Foundation (PACF).

During his lecture before an attentive Filipino American audience, he shared his latest research findings at the U.S. Library of Congress with some never before seen photos that included a beaming Rizal.

Much could still be discovered and understood about the “First Filipino” and “Greatest Malayan,” Ocampo noted even after his more than three decades of research.

“Listening to Dr. Ocampo is like listening to your favorite uncle tell stories about your family. He spilled secrets and dished the juicy details about our Hero… complete with photos that you and I won’t find in history books,” wrote Emilio and Alpha Nicolasin, in a Facebook post.

Rizal was a nationalist, author, poet, scientist, artist and  as an ophthalmologist, he left his lucrative practice in early July of 1892 and founded the “La Liga Filipina” in Tondo—only to be exiled a few days later to Dapitan in Mindanao  until September of 1896. The Spanish colonizers executed him on Dec. 30, 1896 for alleged treason.

Ocampo, a prolific writer and columnist for the Philippine Daily Inquirer, generously entertained questions and signed books and program copies for the audience. He also graced the flag-raising at the Daley Plaza in downtown Chicago in the morning of the 121st Anniversary of the Proclamation of the Philippine Independence Day June 12.

Ocampo then took part in a special tour of the Philippines collection of the Field Museum in the afternoon before continuing his life-long love of doing research at the Newberry Library where voluminous Filipiniana was brought in by American colonizers. —With reports from Grace Garcia Szpytma and Consul General Gina Jamoralin.