BMW Electric Cars: What Can We Expect the Future Will Bring

BMW Electric Cars: What Can We Expect the Future Will Bring

The Munich-based manufacturer will offer 25 electrified vehicles in 2023, “two years earlier than originally planned,” chief executive Harald Krueger said in a statement. Of those, more than half will be all-electric while the remainder will be hybrids, BMW said. The carmaker took an early lead in battery-powered driving with its i3, released in 2013.

Will electric cars be fun to drive? #BMW #PowerBEV based on 5 series uses 3 5th gen electric drive units putting out 530kW/720hp with 0-100kmph in under 3s. 2 e-motors on rear axle are controlled independently bringing e-torque vectoring (& is more effective than LSD) #NEXTGen19 pic.twitter.com/hDiirtQXqD

However, it is no longer the market leader using the technology, which is indispensable for carmakers to meet the EU’s tough new carbon dioxide (CO2) emissions rules set to bite from 2020. Germany’s flagship industry as a whole is seen as lagging foreign competitors like California’s Tesla or China’s producers.

In the first five months of 2019, BMW sold 48,000 electrified vehicles, up two percent on the same period in 2018. But that number made up just five percent of the group’s total unit sales of more than one million. “By 2021, we will have doubled our sales of electrified vehicles compared with 2019,” Krueger promised.

Huge investments are needed to modify production lines and develop electric drive technology, weighing on carmaker’s bottom lines — and pushing them into unprecedented collaborations. BMW is expecting a net profit “well below the previous year’s level” in 2019, in part blaming higher costs.

In response, it has linked up with Jaguar Land Rover to develop next-generation electric motors. Meanwhile, manufacturers know electric cars will only find receptive buyers if the charging infrastructure is in place to support them. They pressed Chancellor Angela Merkel on that point in a high-level meeting in Berlin on Monday night. 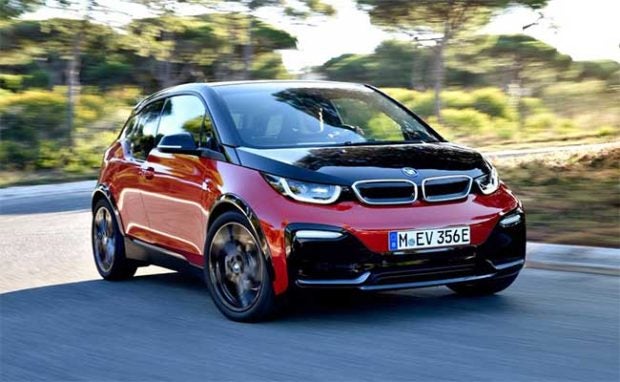 Politicians, car bosses and union representatives agreed that by 2030 there should be enough charging points to support between seven and 10 million electric vehicles on German roads, the VDA industry federation told news agency DPA.

Mammoth Volkswagen has also jumped feet-first into an ambitious electric strategy, planning 70 new models by 2028 and shooting for sales of 22 million over a decade.