100 days of Trump? American voters made a mistake

100 days of Trump? American voters made a mistake 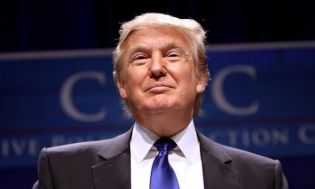 Instead of FF’s let’s just state all the reasons the president for his first 100 days deserves an “F” grade. And that doesn’t stand for Filipino.

When Trump was inaugurated he stood up and insisted he was “America First.” Anti-NATO even.

Leaders around the world scratched their heads. Even China was concerned, especially when Trump made that “not-quite-a butt-call” to Taiwan’s president. “One China” policy? Who cares? Trump is the clueless, “what-me-worry?” prez who thinks he’s king.

Consistency is optional. Blood is everything. So Ivanka is his queen and the son-in-law is a top aide. And everything isn’t quite what he promised.

America First? But send missile strikes to Syria and the “Mother-of-all-Bombs” in Afghanistan. Trump’s now gone from anti-NATO to pro-NATO. He’s gone from a Putin bromance to a Xi version; and all to thwart North Korea’s Kim Jong Un.

Is the president just getting his sea legs? If he is, he’s bowlegged and wobbly.

The official 100th day isn’t until April 29t, but I’d say last week’s Earth Day is a good indicator for what we can give Donald Trump in advance.

Trump’s put in a climate-change denier to run the Environmental Protection Agency. He’s cutting billions from the budget that would signal America’s global leadership on climate change. And he wants to jump start coal like it’s some answer to our energy issues.

For taking us backward, and for raising our temperature levels–just like a good greenhouse gas–on every other issue from immigration to travel bans to North Korea and the Middle East, there’s only one grade for Trump.

Trump will say 100 days is a phony benchmark. It’s not. It’s an early stage round number that can act as a political Nostradamic tool. (You know, the 16th century French physician Nostradamus who could see the future, though I doubt he could have predicted Marine Le Pen).

100 days is more than just symbolism. It’s like a preventative check-up. Are they worthwhile or a waste? Not if you catch that thing in your colon.

And the Trump administration has some not so benign growths, and we’re not even talking about Russian involvement in the U.S. election.

For a presidency, 100 days is the way to spot an early trend of an administration’s credibility. Is it trustworthy? Is it caring?

100 days shows whether an administration can go off its training wheels. It also can confirm if voters made the right choice.

It’s like the money-back-guarantee on a purchase. Only the presidency doesn’t come with a MBG. Unless you’re a crony or a backer. Or in Trump’s case a family member.

You can impeach, but that’s easier said than done. And then once impeached, it’s not easy to remove. (Like Bill Clinton).

Every day there’s a new spotlight on Trump’s exposure on ethics.

Just this week, there’s the pimping of his own D.C. hotel on a State Department website. Add that to the potential conflicts with all his business holdings internationally.  But who knows the real extent, since Trump’s failed to produce an income tax return that fully discloses his interests.

At the very base, Trump has not even done the minimum we need for an incoming president.

If you thought it was a good idea to have government run as a business, then by now you must know how ridiculous that is.

Shareholders aren’t the same as citizens really. If they were, then why would Trump be so willing to throw 24 million off Obamacare? Or cut benefits and support to the poor and elderly? Because the poor can’t afford to be shareholders. To a Trump, they’re not real people.

Trump has tried to adapt his boss approach to government by issuing more executive orders in his first 100 days than previous presidents.

Most of them have had the impact of press releases. They’re basically photo ops for temporary laws that can be reversed at the drop of a hat.

For Trump, EO’s also create useless amounts of paperwork and argument, when boneheaded ideas are proposed like his Muslim travel bans, both of which have been halted by the courts, one by a judge in Hawaii.

Which brings us to yet another hallmark of Trump’s100 days, his appointment of clueless people whose philosophies are antithetical to the people.

Trump values money over intellect. If you’ve made money you’re a success. That’s why his billionaire cabinet, which includes Betsy DeVos, who never met a public school she liked.

Trump likes people who will undo all the good that has come from previous administrations. In fact, some don’t even have a respect for the people of the United States of America.

Case in point, Attorney General Jeff Sessions who was on conservative talk radio last week talking about the travel ban. Said Sessions:  “I really am amazed that a judge sitting on an island in the Pacific [Hawaii] can issue an order that stops the president of the United States from what appears to be clearly his statutory and constitutional power.”

Oh, my Lord. I am amazed that someone like Sessions from Alabama has the intelligence to rise to the levels of government.

Sessions defended his comments by saying “Nobody has a sense of humor anymore.”

Well, there’s nothing funny about making fun of a U.S. judge of the 50th state for protecting the Constitution that says the government does not create laws against people purely for their race or religion.

There’s no joke in that. But in the First 100 days, the Trump administration has been such an enduring joke that the TV show ”Saturday Night Live” has become a weekly satirical balm for all  the stupidity and hypocrisy coming out of the White House.

And despite downplaying the 100, Trump seems desperate to do something by the deadline. Who knows? Tax cuts, especially the roll back of corporate taxes?   You mean more “trickle down?”  No matter what Trump says, we already know that that doesn’t work.

Trump may try to be a “100 day” denier. But his 100 days is on the record. And as we review it, it gives us a chance to see the difference between the campaign guy and the guy in office. And now when the new president is on the honeymoon, when a president is usually able to get some things done, we look back and see, Trump has done nothing.

Here’s what 100 days really means? It means American voters screwed up. It means for a four-year term, America still has a healthy sentence remaining for which there’s no real parole.

In that sense, the 100 days really is a worthless exercise. But it’s less depressing than marking the days off in a cell wall with chalk.

Emil Guillermo is an award-winning journalist and commentator who has covered news and politics Washington, D.C , California, Texas and Hawaii.  Follow at http://www.twitter.com/emilamok