Asked on NBC’s “Meet the Press” whether he thought impeachment was good politics for him, Trump replied, “I think I win the election easier.” The president repeated his longstanding allegation that the FBI’s counterintelligence investigation into his 2016 campaign was illegal.

“I was spied on. What they did to me was illegal. It was illegal on the other side. I did nothing wrong,” he said in the previously recorded interview.

“So impeachment’s a very unfair thing because nothing that I did was wrong. And if you look at the Mueller report, there was no collusion. This was all about collusion.”

The Democrats are split over whether Trump should be impeached after the Mueller Report into Russian interference in the 2016 election outlined numerous contacts between his campaign and Russians, as well as evidence that the president tried on several occasions to stymie the investigation. 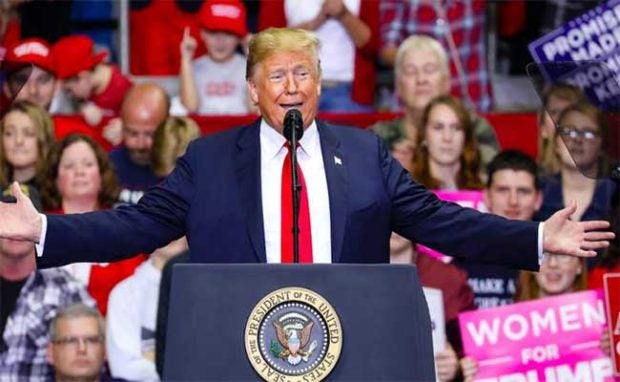 While many of the candidates for the Democratic nomination are pro-impeachment, House Speaker Nancy Pelosi has argued that it would be a risky move without an “ironclad” case and bipartisan support.

If the Democrat-controlled House of Representatives were to vote on formal impeachment charges, the Republican-held Senate would decide whether to convict, which requires an unlikely two-thirds majority.

Trump told “Meet the Press” Pelosi was staving off growing impeachment calls from within the Democratic caucus because she agreed with his assessment that it would harm their prospects in 2020.

“I think she feels that I will win much easier,” Trump said. “I mean, I’ve been told that by many people.”

He concluded that there wasn’t sufficient proof of a criminal conspiracy but found that Trump’s campaign welcomed and expected to benefit electorally from information stolen and released through Russian efforts.

Trump would not commit to addressing foreign election interference with Russian President Vladimir Putin when they meet at the G20 summit in Osaka later this month.

Asked by “Meet the Press” host Chuck Todd if he would directly bring up the issue with Putin, Trump said, apparently sarcastically: “I may if you’d like me to do it, I’ll do that.”

In a wide-ranging interview Trump said he was not prepared to lose his reelection bid and revealed that former vice president Joe Biden was his preferred opponent.

“No I’m probably not too prepared to lose. I don’t like losing. I haven’t lost very much in my life,” he said.

He offered rare praise for 2016 rival Hillary Clinton, saying she was a “great candidate” and that he would rather run against Biden than face her again.

“Sleepy Joe. He’s sleepy. She was not sleepy,” he said.

Asked about a roiling controversy over substandard conditions in holding centers for migrant children at the southern border, Trump blamed former president Barack Obama for the Trump administration’s family separations policy and said Democrats were holding up humanitarian aid.

“We’re doing a fantastic job under the circumstances,” Trump said.

“What we’ve done is we’ve created, we’ve, we’ve ended separation. You know, under President Obama you had separation. I was the one that ended it,” he added.

UN special rapporteur Agnes Callamard has said there is “credible evidence” to warrant investigation and financial sanctions against the prince over Khashoggi’s murder in the Saudi embassy in Istanbul last October.

Trump suggested that other Middle Eastern countries such as Iran had committed worse crimes and that an investigation would be harmful for America’s business interests.

LATEST
Tulfo grills mall security chief over interrogation of cashier
Monsters in Kuwait
PiTiK: Good news and bad
Right to disconnect
Charter change: Much ado about nothing?
Your subscription could not be saved. Please try again.
Your subscription has been successful.
MOST READ
usa Transgender Filipina found dead in NY hotel room
usa Filipino Singer Peter Rosalita Earns Standing Ovation on AGT All-Stars 2023
usa Asians with guns, cops with too much power
usa California is likely to witness stunning super blooms in 2023
usa Filipino workers sue Louisiana oil company for ‘abandoning’ them in a hurricane
usa The fox in the henhouse
usa Super Bowl 2023: First in NFL history with two black starting QBS
DID YOU KNOW?
Kylie Jenner Ramen Recipe: Is It Good?
How to Store Raspberries Properly
How To Play Drunk Jenga: The Ultimate Guide
Best Food to Bring Camping
Popcorn Toppings that Are Perfect for Movie Night