Trump and Iran: What Will Happen as the Conflict Intensifies

“They made a very big mistake,” Trump told reporters at the White House following the strike near the strategic Strait of Hormuz. “This country will not stand for it, that I can tell you,” said Trump.  But while one of his top Republican allies said the downing of the drone had taken the two countries “one step closer” to war, Trump simultaneously appeared to play down the incident saying it may not have been unintentional.

Trump approved a strike on Iran to be launched tonight in retaliation for drone shutdown but then abruptly changed his mind and pulled back. @shearm @EricSchmittNYT @michaelcrowley @maggieNYT https://t.co/VsLUUZ7l1T

The Islamic Revolutionary Guard Corps said it had brought down the unmanned Global Hawk surveillance aircraft as it was “violating Iranian air space” over the waters of Hormozgan province.

The Pentagon, however, denounced an “unprovoked attack” in international air space, claiming the drone was some 34 kilometers (21 miles) from the nearest point in Iran when it was downed by a surface-to-air missile.

Iran vowed in response to go to the United Nations to prove Washington was “lying.”

Crude oil prices rose more than six percent after the incident which marked a new peak in tensions as Tehran pushes back against surging US diplomatic, economic and military pressure.

Trump has repeatedly said he does not favor war with Iran unless it is to stop the country getting a nuclear weapon — something Iranian leaders insist they are not pursuing. 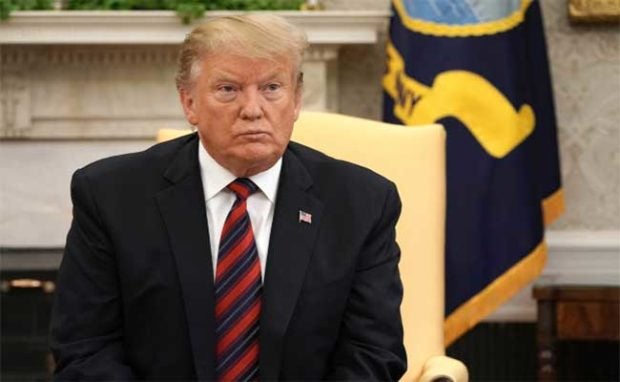 But critics of the Trump administration say that his policy of “maximum pressure” — including crippling economic sanctions, abandonment of a complex international deal to regulate Iran’s nuclear activities, and deployment of extra sea, air and land forces to the region — make war ever more likely.

The drone downing came as Iran was already accused by Washington of having carried out explosions on oil tankers in the congested Hormuz area. Tehran denies having been behind the attacks but has frequently threatened in the past to block the sea lanes used by shipping to move much of the world’s oil exports.

In Washington, talk of war has become part of the already heated atmosphere as Trump’s reelection fight starts to gain traction.

A key Republican ally of Trump, Senator Lindsey Graham, said the president’s “options are running out.”

Asked if he believe the countries were edging closer to war, he replied: “I think anybody would believe that we’re one step closer.”

“They shot down an American asset well within international waters trying to assess the situation. What are you supposed to do?”

One of Trump’s biggest opponents, the Democratic speaker of the House of Representatives, Nancy Pelosi, warned that “there’s no appetite for wanting to go to war in our country.”

Russian President Vladimir Putin, who has close relations with Iran’s leadership, said that US military retaliation against Iran “would be a disaster for the region.”

Tehran and Washington have been foes for decades but Trump’s arrival in the White House, alongside veteran Mideast hawks like his national security adviser John Bolton, has seen a sharp deterioration in relations.

Trump began last May by abandoning — and effectively wrecking — a 2015 international agreement on bringing Iran in from the diplomatic cold in exchange for verified controls on its nuclear industry.

Subsequent reimposition of US sanctions has badly hurt Iran’s struggling economy. In addition, Washington has deployed an aircraft carrier task force, nuclear-capable bombers, an amphibious assault ship and a missile defense battery to the region.

Trump was elected in part on promises to end US involvement in wars in the Middle East, but the president has at the same time made clear his unquestioning support for Iran’s big rivals in the region — Israel and Saudi Arabia.

Iran, meanwhile, has threatened to stop observing restrictions it had agreed to under the 2015 deal on enrichment of uranium. This has been seen in part as an effort to pressure European governments that want to save the deal to push back against Washington.

US-China Trade and Tariff War Continues to Rage On

US to Make 30,000 More Visas Available for Seasonal Workers

The US State Department called that “extortion.” Increasingly, that diplomatic cold war risks turning to violence.

Iran’s Foreign Minister Mohammad Javad Zarif said Tehran would go to the UN to prove the drone had entered Iranian airspace. “We’ll take this new aggression to #UN & show that the US is lying about international waters,” he tweeted. “We don’t seek war, but will zealously defend our skies, land & waters,” Zarif said.

Washington is also blaming Iran for mysterious explosions that damaged two tankers in the Gulf of Oman last week.

Commander Sean Kido of US Naval Forces Central Command, or NAVCENT, said a mine allegedly used in one of the attacks “is distinguishable and it is also strikingly bearing a resemblance to Iranian mines that have already been publicly displayed in Iranian military parades”.

The Japanese-owned Kokuka Courageous, loaded with highly flammable methanol, came under attack on June 13 as it passed through the Gulf of Oman along with the Norwegian-operated Front Altair.

Kido told reporters in the UAE emirate of Fujairah that the US military had also recovered “biometric information” of the assailants on the Kokuka Courageous including fingerprints. But Iran’s Defense Minister Amir Hatami flatly rejected allegations Iran was behind the twin attacks.