In a country that nearly always believes bigger is better — think supersize fries, giant cars and 10-gallon hats — more and more Americans are downsizing their living quarters.  Welcome to the world of tiny homes, most of them less than 400 square feet (less than 40 square meters), which savvy buyers are snapping up for their minimalist appeal and much smaller carbon footprints.

This tiny home in Iceland is one of a kind 🏚🇮🇸 pic.twitter.com/weN9wOxGv4

The tiny homes revolution, which includes those on foundations and those on wheels, began a few decades ago, but the financial crisis of 2008 and the coming-of-age of millennials gave it a new impetus.

The proliferation of home improvement shows on networks like HGTV fueled the trend, inspiring customers ready to personalize their own small living spaces.

Cost is one of the driving factors — a tiny home of just over 200 square feet with a customized interior can go for about $50,000 — a massive savings over a McMansion in the suburbs.

“We have a housing crisis and we have crumbling buildings around us. It’s just hard to find good quality living at an affordable price,” says Brandy Jones, who took the plunge with her husband and two sons.

Eight months ago, they moved into a tiny house in Reading, Pennsylvania, about 60 miles (100 kilometers) northwest of Philadelphia.

Jones says that for a new house in the area, the family would have had to budget for about $300,000. The tiny home option “is a huge difference. It makes living affordable.”

In most cases, the savings is not enough of a motivating factor: the average newly-built family home in the United States measures about 2,600 square feet, according to the Census Bureau.

Marcus Stoltzfus, the director of sales and marketing for Liberation Tiny Homes in nearby Leola, says that over the last 40 years, Americans “went into this McMansion phase, where they built those massive homes.”

Now, in some parts of the country, “people are realizing that living with less is very advantageous to your lifestyle.” 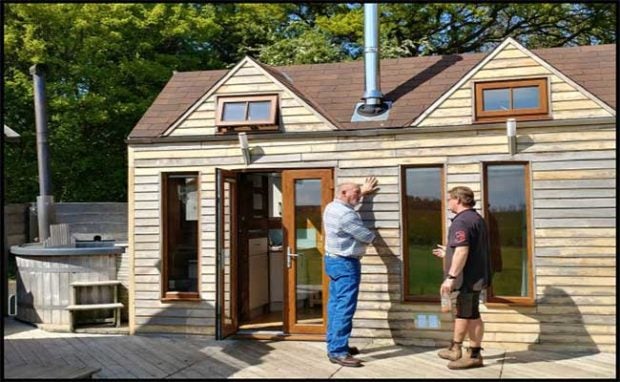 Scott Berrier, who moved into a 370-square-foot home about four months ago with his wife Melissa, says he’s happy not to have as many possessions as before.

“We really like the whole minimalist approach — kind of paring down and not having clutter everywhere and everything,” Berrier explained, adding that his home is simply more functional.

“The biggest difference I notice is that we use every single space. There is not any wasted space,” he said.

Roland Figueredo, who plans to leave his New York apartment in July for a tiny house in Oregon, says he’s ready for a change.

“We truly are trying to simplify our life and getting rid of our crap,” he said.

Even if public opinion is changing, it’s not always easy to go against societal norms and materialistic expectations.

When Berrier told friends of his plans, several of them warned him that his new home would make him feel claustrophobic.

Stoltzfus admits the trend can seem “very hipster-ish” and suffers from a bit of a negative image, but he believes that will change over time.

“The more that folks travel, work from home, this trend will definitely be up there,” he said.

“You’re not leaving as much of a carbon footprint. You’re not using as much electricity, as much water” as in a traditional home or apartment, he notes.

Despite the advantages, the tiny homes movement is far from widespread. Rough estimates put the number of tiny homes in the United States at a little more than 10,000.

The first sticking point is financing — would-be homeowners are finding it impossible to get traditional loans for non-traditional houses.

Banks are instead offering medium-term loans of up to seven years — at significantly higher interest rates than regular loans.

But the main obstacle is a legal one: most municipalities and towns ban residents from living year-round in anything on wheels, and often have statutes requiring homes to be at least 900 square feet.

Several US states such as Colorado, Nevada and North Carolina are seen as more progressive on the issue, but the country’s most populated areas have for the most part ignored the movement.

Historically in American culture, bungalows, caravans and mobile homes have a bad reputation — they are seen as badly made and decidedly lower-class.

But the Berriers’ home is impeccably decorated with a bathtub, a sunroom and a movie screen — no “trailer trash” here.

“There are preconceived notions. They haven’t seen it enough. It’s just something new. I think that’s the problem,” Berrier said.

Questions to Ask When Buying a House in 2019

How Much Home Can I Afford? We Show You How to Figure It Out!

Homes made by Liberation Tiny Homes like the Berriers’ place are “built like a normal house” with the same materials, explained Stoltzfus.

So far, the company has completed more than 65 projects since launching in 2015. For Jones, who lived in a motor home for several months before moving into her new place, “a travel trailer compared to a tiny house is night and day.”

And while some non-profit organizations are building tiny homes for the homeless, the movement is primarily targeted at young couples with the means to spend more than they would on a mobile home. To vault over the many legal hurdles, many tiny home buyers are setting up their places without permits from local urban planning officials.

But others are opting for tiny house communities, which are on solid legal footing and are sprouting up all over. Tiny Estates in Elizabethtown, Pennsylvania took over a former campground and obtained the necessary permits to accommodate tiny homes on wheels.

“It’s important to go to your town meetings, your borough meetings and just say, ‘Hey, here’s what they are’,” says Berrier. “It’s not some clandestine little sketchy thing. These are beautiful tiny houses, well designed. If anything, they add property value to things.”