What Quezon and Pope Pius XII had in common

Emilio Aguinaldo, who lost in the 1935 presidential election, and members of Quezon’s own cabinet saw Jews as “Communists and schemers” determined to control the world. It was a time when almost everyone felt the sting of the anti-Semitic propaganda.

But both President Quezon and Pope Pius XII, who never met in person, made a leadership decision for the safety of Jews when others chose to abandon them. They just knew there was something terrible with a religion that observed total silence and inaction when injustice was being done to others. 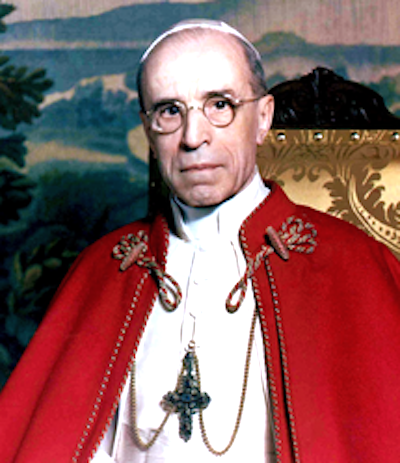 President Quezon was a Catholic. He ditched inaction and “made them (Aguinaldo and his own cabinet) feel ashamed of themselves for being victims of propaganda intended to further victimize an already persecuted people” (Alex Frieder, 1939).

Pope Pius XII did exactly what Pope Francis has done for Syrian refugees in our time when most European leaders were closing their doors. During the Third Reich, Pius XII opened the walled Vatican City for Jews, and he instructed all convents, religious houses, and monasteries in Rome to provide a safe haven for the persecuted people.

Both the Filipino President’s timely initiative and that of the Pope were a life-saver. Jewish lives were saved in Rome and in Asia, the former being a city under the Nazi barbaric military control and the latter a nation ruled by a noble Catholic president.

Of the 5,715 Roman Jews listed by the Germans for deportation, more than 4,000 were given shelter by more than 150 Catholic institutions within Rome and more than 400 were given warm sanctuary inside the Vatican walls.

When the Nazis kicked off World War II, the main objective of the SS Policy in Italy was the deportation of all Jews living in Rome to Auschwitz, where the much-dreaded concentration camps on earth were strategically located.

In Italy, under the headship of the Holy Father, Catholic laymen, women, and religious took the necessary risks to put countless Jews out of danger. Moreover, hundreds of Polish, Dutch, and Belgian priests and nuns were among more than 18,000 Catholics who were later officially recognized by the Israeli Government for their courage in saving Jews during the ordeal.

The barbaric trolls of Nazism were the opposite of happy when they learned what Pope Pius XII did. The Nazi’s Reich Security Main Office made a bitter accusation against the pontiff:

“In a manner never known before, the Pope has repudiated the National Socialist (Nazi’s) New European Order…. Here he is virtually accusing the German people of injustice to the Jews, and makes himself the mouthpiece of the Jewish war criminals” (1942).

The Philippines was under American rule, and Quezon had to ask for 10,000 visas for the refugees to which the United States granted only 1,200. Eventually, 1,200 German and Austrian Jews found sanctuary in the Pearl of the Orient.

Wherever and whenever a brave and noble act does shine, there is in the future a brighter hope for mankind and in every human face always a beautiful smile.