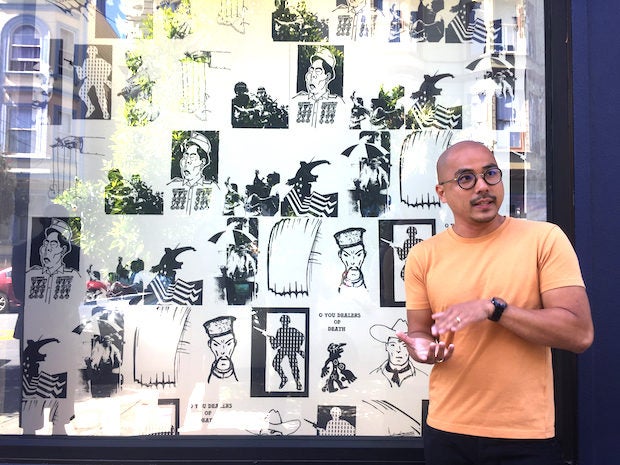 SAN FRANCISCO – London-based Filipino artist Pio Abad was born in the Philippines in 1983. It was the same year that the body of Senator Benigno “Ninoy” Aquino Jr., a key political rival and vocal critic of the strongman Ferdinand Marcos, was sprawled in a pool of blood from a bullet to his head on the tarmac of the Manila International Airport, shortly upon arriving from a three-year self-imposed exile in the United States.

This incident sparked a revolution that eventually put an end to the 20-year conjugal dictatorship of Ferdinand and Imelda Marcos that culminated in their exile to Honolulu, Hawaii in 1986.

This time in Philippine history is the inspiration and the subject of Abad’s first solo exhibition in the United States, Kiss the Hand You Cannot Bite, a culmination of his residency at KADIST in San Francisco.

“The exhibition examines these histories of erasure, histories of empire, through this intertwined American and Filipino history; particularly that intertwining during the ‘70s and ‘80s. This is now a part of what has been a seven-year long project that attempts to take into account or understand the cultural legacy of Ferdinand and Imelda Marcos,” says Abad.

He says further: “That serves as a foundation of my work because I was born in the tail end of the dictatorship, but, also, my parents were very politically involved in the anti-dictatorship struggle. They spent some time in incarceration and they were also involved in rebuilding democracy after the dictatorship fell. And now the work that they have devoted their lives to seem to be back in tatters with the current political context in the Philippines.”

Born and raised in Manila, Pio is the son of lawyer and politician Florencio Abad and the late politician Henedina Razon-Abad. After studying art at the University of the Philippines, he went to Glasgow, Scotland where he received a BA from the Glasgow School of Art then an MA from the Royal Academy Schools in London. His aunt, internationally acclaimed visual artist Pacita Abad, had encouraged him to do so (“If you want to do this seriously, you need to get out,” she said. “It allowed me to really think about things. It also allowed a sense of possibility,” says Abad who now lives in London. “Glasgow was a city where everyone seemed to be able to make a living as an artist. It’s that combination of distance and possibility that allowed me to keep going. Making the work that I make, I do need that distance from Manila to be able to unpack things.”

Abad’s art is about the social and political signification of things. He works in a range of media that includes textiles, drawing, installation, and photography. His recent projects include Splendour, a solo exhibition at Oakville Galleries, Ontario (2019); The Honolulu Biennial: To Make Wrong/Right/Now (2019); and the 12th Gwangju Biennial: Imagined Borders (2018). He has exhibited at venues including the Moscow Museum of Modern Art, (2018); Para Site, Hong Kong (2017); Centre for Contemporary Arts, Glasgow (2016); and 4A Centre for Contemporary Asian Art, Sydney (2016).

Kiss the Hand You Cannot Bite is a newly commissioned body of work that draws from multiple histories of exile, resistance, and displacement from the ’70s and ’80s that brought Filipinos to California.

Anchored within the context of wider tragedies during Ferdinand Marcos’ dictatorship in the Philippines (1972–1986), the exhibition reveals the underbelly of the sociopolitical mechanisms that allow authoritarianism to manifest today.

Comprised if photographs, sculptures, prints, and paintings, Kiss the Hand You Cannot Bite uncovers the tools that perpetuated a political fantasy, allowing the Marcoses to cling to their gilded power.

Shedding light on the devices behind empires and dictatorships, Kiss the Hand You Cannot Bite is an elegy for those whose efforts were muted by the absolute power that perpetuates empire, for painful personal histories and imminent collective futures.

“The residency at KADIST has been an opportunity to zoom out a bit and try to understand this Marcos history to American history, and how you can’t really have one without the other,” says Abad.

Part of the exhibition is a piece by San Francisco native and Filipino American artist Leo Valledor, who was a hard-edge abstractionist painter and leader of the minimalist movement in the 1970s. Valledor’s The Bridge (To Sonny Rollins) (1981) is a bookend to Abad’s exhibition.

“I was really interested in how he occupied these very formative cultural moments in the United States; but he also fell into the gaps of the telling of these histories,” explains Abad. “I wanted him to be a presence in the show not because my work had any relation to the narrative that he talked about or because I dealt with abstraction, but because I wanted to root this research on erasure, on empire, on narratives that fall into the cracks because they’re too complex to tell. I wanted to root it in the Bay Area and I wanted to root it into the lives of Filipino American Bay Area artists. I always think of producing an exhibition as a kind of literary exercise, so this is a kind of quotation or a prologue that leads to my exhibition.”

Abad created seven works exhibited in two rooms and on the display windows of the gallery. One room contains a “constellation of three objects” that speaks about the married histories of the United States and the Philippines in the context of politics in the ‘70s and the ‘80s.

On a wall hangs a piece called A Thoughtful Gift (2019), which is a letter written by Nancy Reagan to Imelda Marcos etched onto Carrara marble.

“It’s a letter that Nancy Reagan wrote to Imelda Marcos shortly after the Marcoses were indicted by the Manhattan court for fraud and racketeering,” says Abad. “I found it at the Reagan library. Going through the different correspondences there, you realize that the Marcoses and the Reagans were very good friends. There was a geopolitical alliance that had to be maintained.”

What Abad found particularly interesting while doing research at the Ronald Reagan Presidential Library is the idea of the past becoming the present and the future. “These histories folding into itself.”

Abad wanted to find a way to turn the correspondences that he found into something incontrovertible. “Like this document becoming something more monumental than it is. This idea of engraving it into marble, from an archival to something more permanent.”

This act of monumentalizing is epitomized by a sculpture lying on the floor in the middle of the room. The exhibition’s namesake, Kiss the Hand You Cannot Bite (2019), is a large-scale concrete replica of a pearl, diamond, and ruby bracelet owned by Imelda Marcos. Abad created the sculpture with jewelry designer and Abad’s wife, Frances Wadsworth Jones.  “[It] is a replica of a bracelet that Imelda Marcos tried to smuggle to Honolulu when they were given exile there by Ronald Reagan,” says Abad.

“It’s all taken from a single photograph and modeled in 3D thereon, and monumentalizing it as a way of looking for accountability,” says Wadsworth Jones. “At this time when so many givens are being called into question and so many facts are being stretched, [it’s] something solid, something you can quite hold onto, like evidence.”

“It’s a sculpture that constantly shifts between monument and mausoleum. It doesn’t commemorate a specific event, so to speak. It’s a monument that refracts so many histories. It’s a monument to the Regan and Marcos friendship, it’s a monument to impunity, it’s a monument to this struggle to retain money,” says Abad. “It’s hard not to make work about history without fully embracing its fragility. There are things that are incontrovertible that you’d hope that there is enough of us that will commit to these undeniabilities.”

Completing the trio of pieces is a framed photograph called Hand and Barbed Wire that was taken by Pulitzer Prize winning photojournalist Kim Komenich in Manila on February 25, 1986; the day the Marcoses fled the Philippines.

“One of the privileges of the residency is I’ve been able to meet all of these figures that figured in what I’ve been researching,” says Abad. “Meeting Kim was really poignant because I realized, while going through his negatives, that my memories of the revolution are actually rooted in his images.”

In the adjacent room hang three acrylic on canvas paintings based on propaganda designs for a series of publications in the ‘70s to promote Marcos’ idea of a “new society” and justify his declaration of Martial Law.

“If the Reagan letter was about inscribing something to talk about history, I wanted [the] opposite—reclaim these designs and re-appropriating them,” says Abad. “Each painting is dedicated to an activist or an individual who devoted their lives to fighting Marcos’ violent fictions.” A selection of images from the series Untitled (Bolerium), 2019 by Pio Abad

Two of these paintings are titled For Gene (2019) and For Silme (2019). Silme Domingo and Gene Viernes were Filipino American labor activists whose murders in Seattle in 1981 were ordered by Marcos in retaliation for their anti-Marcos organizing. The last painting For Dina (2019) is dedicated to Abad’s mother who died in 2017. “I wanted to end on something which is  new for me, end on a personal note,” says Abad. “The show shifts from something geopolitical to something really personal.”

On the display windows of the gallery is Untitled (Bolerium) (2019), a series comprised of 407 digital copies of images gathered from Bolerium Books in the Mission District that carries rare titles on American social movements and political memorabilia. This includes a caricature of Ferdinand Marcos with his various medals of questionable authenticity as supposedly the most decorated Filipino soldier of World War II, a fantasy that he had used to build his political reputation.

“I really like this idea of San Francisco as this repository of Philippine memory [and] history. A lot of people did end up here in the ‘70s and ‘80s as a result of their political allegiances and their political activism,” says Abad.

“Stripped of text, these images talk about something much more universal. This seemingly aberrant situation is actually part of a cyclical way that politics works. There are certain specific moments in this history that feel more universal now that we’re kind of dealing with this incoming or maybe already arrived threat of authoritarianism. These narratives of complicity, but also these narratives of impunity seem to be back in fashion.”

Kiss the Hand You Cannot Bite is Abad’s most personal exhibition. It’s a way of navigating his personal feelings about the political situation at the moment.

“It feels more heightened because it’s viewed through a lens of loss. I lost my mom, and that was due largely to the stress of working in politics; so, all of these themes are not theoretical for me. Family is, yes, a source of inspiration, but, also, they’re agents through which I produce the work. These political narratives are painfully personal. And maybe this is why I’ve had such an amazing time at KADIST, but I produced the saddest show.”

Kiss the Hand You Cannot Bite by Pio Abad is on view until until August 10, 2019.