The streaming television powerhouse is looking to expand its original shows into other media, and the idea for a Stranger Things video game sprang up after its successful first season, Netflix director of interactive gaming Chris Lee said during a panel discussion at the premier industry gathering known as E3.

“It was like music to my ears,” Lee said. “We are actually hoping to bring people into our franchises through games.” A free Stranger Things mobile game was released in late 2017 before the second season of the supernatural thriller series.

A “Stranger Things 3” video game tailored for play on PlayStation, Switch, and Xbox consoles as well as personal computers is set for release on July 4 as a download priced at $19.99. Netflix this year will also release an eponymous turn-based strategy game spinning of an original “The Dark Crystal: Age of Resistance” television series based on a dark puppet animated film from 1982 directed by Jim Henson and Frank Oz.

Netflix partnered with video game developer BonusXP and the Henson Company on the project. “The Dark Crystal is one of my favorite fantasy films of all time, so it was a bucket-list item for me to be part of this game,” said BonusXP president Dave Pottinger.

“The challenge with Dark Crystal is living up to 30 years of fandom and the expectation that comes with that.”

Stranger Things writers are gamers, as are the show’s characters and many of its fans, so a full-blown title building on adventures in the series was a natural fit, according to show writer Paul Dichter.

The game aims to stay true to the original horror fiction series while adding extra content to the storyline. “One of the fun parts of taking something so serious as Stranger Things and turning it into a game is we get to latch onto levity and make the most of those moments,” Pottinger said, noting that one of the game character’s fighting skills features hair spray. Lee revealed that a new Stranger Things role-playing puzzle game for mobile devices will be released next year, and that Netflix is working with Ubisoft, Roblox and Behavior Interactive on games extending characters and worlds from original shows. 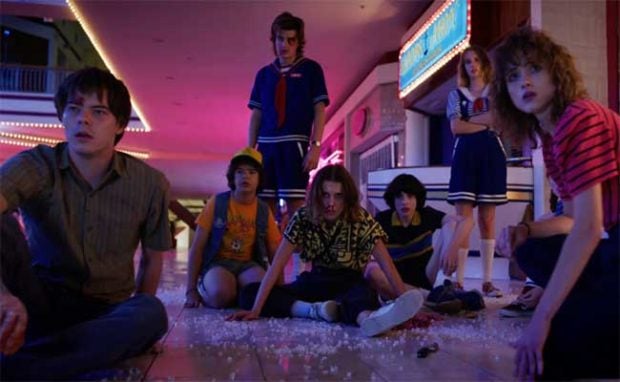 He joked that as much as Netflix loves its popular “Black Mirror” series portraying disturbingly dark outcomes of technology, it has no plans in the works for anything based on the new episode “Striking Vipers” — the story of which revolves around two friends who have sexual encounters in a virtual game world.

Lee did reveal, though, that “Stranger Things” will be popping up in “Fortnite” on the heels of an “easter egg” recently spotted in the battle royale video game sensation.

Netflix has been interested in making videos more interactive for some time, and recently released a Black Mirror episode called “Bandersnatch” that lets viewers make choices that influence the story.

Executives promised there will be more interactive shows at the service.

“This one has storytellers salivating,” Netflix chief content officer Ted Sarandos said of the interactive Black Mirror episode during an earnings presentation.

The dominant online television service has begun efforts to become more interactive as part of an effort to keep its viewers from turning to services like Epic Games’ Fortnite and Microsoft Xbox video games.

“I think about it really as us winning entertainment time away from other activities… Xbox, Fortnite, or HBO or a long list,” Netflix chief executive Reed Hastings said during a recent earnings call. “We compete so broadly with all these different providers.” Netflix is also intent on differentiating its service in an increasingly competitive streaming television market. Disney is on track to launch a streaming television service this year, pulling coveted content such as shows starring blockbuster Marvel action heroes in the process. Basing video games on popular film or story characters from Harry Potter to Spiderman or Batman has long been a staple of the industry.