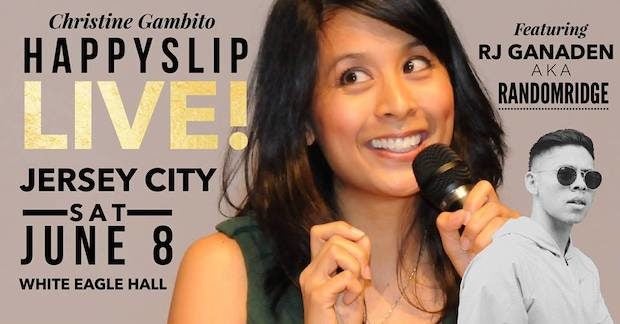 The HappySlip Live! Tour will be at Jersey City’s White Eagle Hall on Saturday, June 8, and on Sunday, June 9, she will perform in NYC’s Gotham Comedy Club.

Best known for her family-friendly comedy sketches in which she impersonates members of her Filipino family, HappySlip was the first YouTube personality to single-handedly create a one-woman show, and act as multiple characters in her videos. She is known to play herself, her dad and mom, her cousin Minnie, her Lola, and an aunt she calls Auntie Baby.

HappySlip videos have been viewed over 100 million times across the web. She started performing comedy at a young age when her mom would request her to do impressions of the family. Other cousins had to play piano. She had to stand up and do “imitation on demand.” Unbeknownst to Christine, those were her early days of stand-up comedy.

Loving to create stories and skits, Christine wrote, performed, and edited her one woman show which started on YouTube in 2006. How the name came about? Her mom used to remind her to wear a half-slip under her dress and skirt, pronouncing it as “hap eslip.” Christine assumed the term was “happy slip” all through childhood until her friends in school asked if she had a sad slip as well.

She decided to use this as a screen name not only for the funny childhood memory, but also based on the hope that people would “slip into happiness” when they watch her videos. Showcasing her unique comedic style of celebrating and poking fun at Filipino American culture, her videos garnered millions of views leading her to become one of YouTube’s first chosen paid partners.

Christine took a hiatus from entertainment to start and raise a family – she now has four children Micah, Ian, Timmy, and Selah — but is now taking her show on the road. Christine had sold-out multiple shows in major cities, such as San Francisco, Washington D.C., and Seattle.

“It brings me joy to know if any of my videos has spread some happiness,” said Christine. “If laughter serves as good medicine, and my humor can help to brighten anyone’s day… then I say ‘all glory to God who is the giver of all good things.’”