The United States vs Big Tech: The Antitrust Battle Rages On

The Department of Justice and Federal Trade Commission have carved out a territory for the investigations to set the stage for reviews of the dominance of the largest of the Silicon Valley firms, media reports said. According to the Wall Street Journal, the Justice Department will lead the Google probe, leaving the FTC to review the competition practices of Amazon and Facebook.

NEW: House Dems to open sweeping investigation of big tech and antitrust that'll touch on FB, Google, others, with potential CEO testimony, depositions and much more. Yet another sign of reckoning for big tech. https://t.co/uQUDacWZry

Separately, the House Judiciary Committee announced its own investigation into “competition in digital markets,” saying: “A small number of dominant, unregulated platforms have extraordinary power over commerce, communication, and information online.”

The moves comes amid a rising “techlash” stemming from privacy and data protection lapses at tech firms, and growing concerns about the sheer dominance of these firms.

Politicians on both sides of the political aisle have been stepping up criticism, and some presidential candidates have called for the biggest firms to be broken up.

Analysts say the political winds have shifted against Silicon Valley firms, which had been among the most admired US companies, following revelations on how much personal data they are scooping up.

“Google knows just about everything there is to know about us,” said Jack Gold, analyst at the consultancy J. Gold Associates.

Gold said Google and Facebook, the dominant players in online advertising, have developed sophisticated tools to gather data on users.

“It gives them a leg up,” Gold said. “They can target ads much better than anyone else. The question is whether there is anybody who can compete with them.” 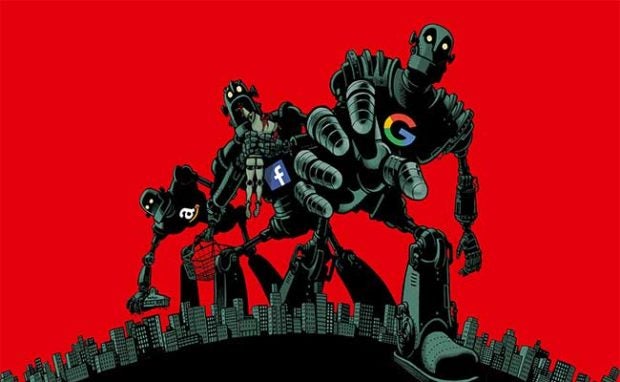 But some legal scholars say antitrust enforcers will face an uphill battle in taking on Big Tech.

Under most legal interpretations, the government will need to show tech firms abused their monopoly position and harmed consumers — a difficult task with respect to Google and Facebook, which offer most services for free.

“I see this as a lot of sound and fury, signifying nothing,” said Larry Downes, project director at Georgetown University’s Center for Business and Public Policy.

“The law hasn’t changed. You can’t just go after companies because you don’t like them.”

Downes said probes are unlikely to find that tech firms have violated the “consumer welfare standard,” which has guided policy for more than four decades.

But the rise of Big Tech has prompted a rethinking of that standard, said Maurice Stucke, a former Justice Department lawyer now on the law school faculty of the University of Tennessee.

“The consumer welfare standard is not the law,” Stucke said, arguing that there is no need to show higher prices if tech firms stifle competition.

Stucke said European antitrust actions against Google have created a “road map” for US officials that may help accelerate their probes.

“All of the areas the Europeans identified could be brought by the US,” he said.

Stucke noted that US antitrust enforcers have an advantage over their EU counterparts with the ability to require “structural” remedies, or a break-up of dominant firms as was done in the 1980s with telecom monopoly AT&T and in the initial ruling against Microsoft, which was overturned on appeal.

But US and EU law are vastly different on antitrust, according to Eric Goldman, director of the High-Tech Law Institute at Santa Clara University.

Rutgers University law professor Michael Carrier agreed that a case against Google could be challenging: “I’m not sure if the consumer has been harmed, so an antitrust case could be harder than it seems.”

Christopher Sagers, a professor of antitrust at the Cleveland-Marshall College of Law, said there may be legitimate grounds to review Google for favoring its own services, but that courts may be cautious. Additionally, he said President Donald Trump’s complaints about tech bias against conservatives have muddied the waters.

Mega-Merger: Sprint and T-Mobile and What’s to Come

“It looks very fishy,” Sagers said. “If you’re bringing the biggest set of antitrust cases since the Great Depression, why are you letting all these other mergers go through?” Sagers said court-ordered breakups are extremely rare, and that a more likely outcome would be an injunction or order to stop stifling competition.

But any remedy against Google would likely be complicated if it involved oversight of its search algorithm, according to Sagers, because it would likely mean a government-appointed monitor — a difficult sell to free-speech defenders. “People would say it’s big government,” Sagers said. “And a court might be quite sympathetic to that argument.”