Kevin Durant is traveling with the Golden State Warriors to Toronto for the first two games of the NBA Finals, leaving open the chance he could be ready to return from a strained right calf in time for Game 2.

3 years ago today, Kevin Durant and the OKC Thunder blew a 3-1 lead to the Warriors pic.twitter.com/Z6jLIVDGDt

Durant, the two-time reigning Finals MVP who has missed the past five games since getting hurt in Game 5 of the Western Conference semifinals against Houston, has already been ruled out for Game 1 on Thursday night.

As of Tuesday, when Golden State held an optional practice before flying, he had yet to do any full-speed work on the court. He has done some shooting, coach Steve Kerr said.

“If he did anything on the court, it would have been pretty light,” Kerr said.

There will be two full days off before Game 2 on Sunday, giving Durant time to get further on-court work done that the Warriors would need to see before he is medically cleared. “We’ll see where it goes from here,” Kerr said Monday. “This is where the fact that there’s a lot of days in between games during the finals helps us, so we’ll see.” 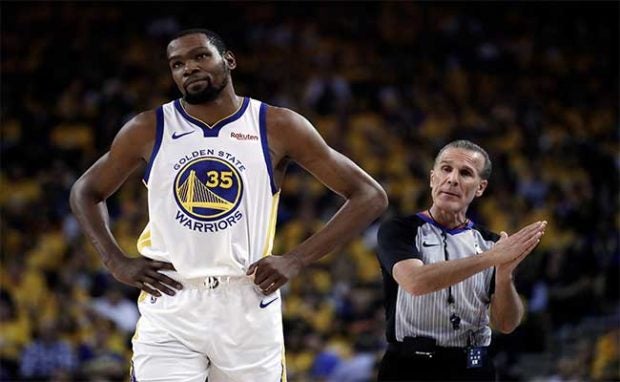 Durant didn’t travel to Houston for Game 6 of that round or to Portland for the two road games against the Trail Blazers in the Western Conference finals. He remained in the Bay Area to rehab, and the Warriors are unbeaten without him.

An impending free agent this summer, he was hurt May 8 when he landed awkwardly on his right foot following a baseline jumper late in the third quarter of a 104-99 victory over the Rockets at Oracle Arena. Durant is averaging 34.2 points per game this postseason.

Kerr said Durant has been spending countless hours rehabbing to recover — hoping to get back soon to what he loves most.

“You get that fear of missing out on stuff, like practices and shootarounds and new game plans and stuff like that. That’s what I miss the most, obviously, grinding on the court individually and with my team. But that’s out of my hands. Out of my control,” Durant said Friday.

“My task is to try to conquer this, and I think that’s the journey (we’re) on as basketball players. So I’m pretty much down for anything but I’m excited that I’m making progress.”

Center DeMarcus Cousins, out with a torn left quadriceps muscle he injured in Game 2 of the first round against the Clippers, hadn’t been ruled out for Game 1 though Kerr mentioned the magnitude of coming back on the finals stage after so much missed time.

Cousins — in his first career postseason — scrimmaged Saturday and again Monday, a sign of progress he is closer to being ready.

“I feel better each and every day. That’s my whole goal, to make sure I get better with each day that comes,” Cousins said last week. “Hopefully, that opportunity comes, and I’m able to get on the floor and help my teammates and try to help them win a championship.”