’19 overseas voter turnout was highest for a midterm -- DFA

’19 overseas voter turnout was highest for a midterm — DFA

Overseas voting in the 2019 elections reached a new milestone in overseas voter turnout, the Department of Foreign Affairs-Overseas Voting Secretariat (DFA-OVS) announced May 24. 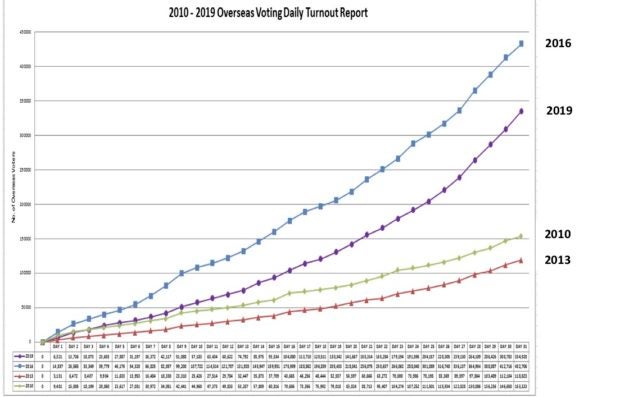 The DFA noted that the 2019 elections can be seen as the culminating activity in a three-year cycle, beginning with the voter registration in 2016, six months after the presidential elections.

Riding on the previous record-breaking number of overseas voter registrants for the 2014-2016 cycle, which saw a total of 1.3 million overseas voters, the 2016-2019 cycle saw a further increase of interest among Filipinos abroad, bringing the total number of registered overseas voters to 1.8 million by the end of the registration period.

The 2019 National and Local Elections had its share of challenges, most notably with the vote counting machines and SD cards. Overseas, there had also been additional issues with regards to the mailing of ballots to registered voters. 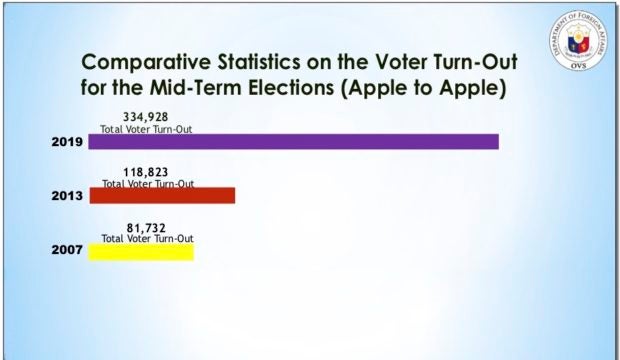 But despite the numerous difficulties on the conduct and management of elections overseas, the Philippine Foreign Service have successfully ushered a voter turnout of 334,928.

This makes it the highest voter turnout for a midterm election and is second only to the 2016 Presidential elections (which had a total overseas voter turnout of 432,706) since the Overseas Voting Act was signed into law in 2003.

Similarly, this high turnout sustains the momentum coming from the 2016 Presidential election cycle and will hopefully continue to set new milestones for the 2022 elections.