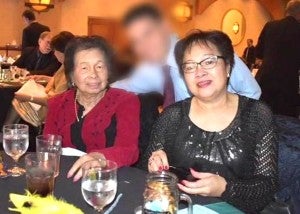 SANTA CLARA, California — An elderly Filipina and her daughter who had just left a church service were killed by a suspected drunk driver who was speeding and lost control of his vehicle, hitting the victims’ car on Thursday night, April 13.

The victims Carina Bontilao Kubow, 61, her 92-year-old mother, Angela Vilbar Bontilao, both of San Jose. Two other women family members in the car were hurt but suffered only moderate injuries.

The suspect, Sunnyvale resident Vinod Bonthu, 26, was being treated at Valley Medical Center for major injuries, according to the California Highway Patrol.

Bonthu was driving a red 2012 Mercedes C-250 at high speed while exiting northbound U.S. Highway 101 at Great America Parkway. The victims came from a late-night mass at Our Lady of Peace Church in Santa Clara at around 11:30 p.m.

Bonthu lost control of his car and crossed over the center median, hitting the victims’ Subaru Forester. He has not been formally booked but is under arrest for felony DUI and vehicular manslaughter, the CHP said.