The 50-minute piece, titled “Utom,” musically narrates the legend of Lake Sebu’s formation and the conflicts of the mythical characters surrounding it, such as the demigod Lemugot and the first T’boli woman Boi Henwu.

Utom is a T’boli musical concept where instruments are used to depict the sounds of nature or to describe an event.

The piece will be staged by arts organization Kularts, which commissioned Aguilar to compose the work using a grant award from the Gerbode Foundation.

“T’boli music, I think, stands apart by its level of sophistication when it comes to compositions that represent an idea and the sound of nature, the supernatural and the divine,” says Aguilar.

“The hegelung, I’d say, is the most representative of T’boli music. It’s a two-stringed boat lute used in utom a lot. Women also play this instrument while dancing.

“Another distinct T’boli instrument is the smaggi, an array of bass gongs. 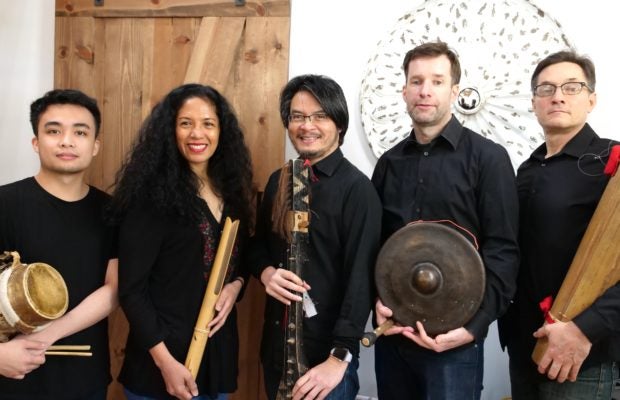 “There is also the t’nonggong, a small skin drum played sitting on the floor while you hold the drum between your feet. I haven’t seen any other drum played this way, it’s quite unique.”

Aguilar’s previous collaborations with Kularts include “Lalawigan,” “Aswang,” “Maseg Typhoon,” “She Who Can See” and “Ba-e Makiling.”

With the belief that everything in the universe is a manifestation of the divine, the T’boli consider art and music the “voice” of the divine. As such, music is a powerful expression when it comes to narrating T’boli mythologies.

Taking two years to compose the work, Aguilar’s inspiration and research came from a book given to him by Kularts artistic director Alleluia Panis.

“It’s called Myths, Mimesis and Magic in the Music of the T’boli by Manolete Mora. It delves deeply into the concept of utom.

“I think it’s one of the best scholarly written books about Philippine indigenous music since the works by the pioneering Jose Maceda, whom I consider a mentor during my college years.”

“I’m very excited to present ‘Utom,’ because it focuses on music as composition. It’ll be purely the musician’s medium,” says Aguilar.

“We’re using music to tell a story. In Western classical music, they call this ‘programme music,’ where the audience is invited to imagine a character or an event rendered entirely through music.

“Typically, audience would rely on printed ‘programme’ notes to guide them in the story. In ‘Utom,’ we’ll supplement the concert with short film footage on select tracks where emphasis and clarity are needed.”

“Utom” will be performed on June 1 during the San Francisco International Arts Festival at the Fort Mason Center for Arts and Culture and on June 9 at Brava Theater.

“I’m excited to have master T’boli musician Joel Ganlal join us in the concert. He is sure to dazzle us with his t’nonggong playing,” adds Aguilar.

Two members from Aguilar’s band, the Fandangueros, will be part of the production. Sage Baggott will play percussion, kulintang, hang drum (convex steel drum), while Greg Kehret will play bass and percussion.

“We added Caroline Cabading for her kulintang expertise and Nick Galang who has a master’s degree in World Percussion Music.” Galang will play agung, kulintang and percussion.

Aswang and halimaw to hold concert in Sonoma County, Calif.