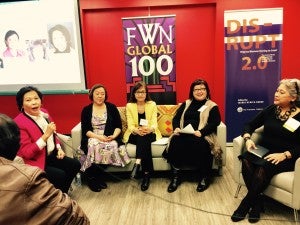 TORONTO, Ontario — Filipino women–Pinays, for short–rock the world, whichever corner of it they find themselves in.  Here, recently, the Filipina Leadership Global Summit Kickoff did just that, in an event dubbed “Disrupting Toronto.”

The three-hour presentation of the Filipina Women’s Network (FWN) was hosted by Consul General Rosalita Prospero, in collaboration with Senior Trade Commissioner Maria Roseni “Nini” Alvero of the Philippine Department of Trade and Industry (DTI).

The event highlighted the Pinay’s role in nation-building, shaped by both choice and circumstance.  At the same time, it served as the official kickoff of the 14th Filipina Leadership Global Summit to be held in Toronto on October 25-29, this year.

Prospero welcomed the audience, made up mostly of women and a few men, who enthusiastically whooped and yelled “Mabuhay!” from time to time throughout the afternoon as each speaker from FWN rose and their impressive were credentials read out.

Commissioner Alvero, a board member of FWN, introduced Marily Mondejar, founder and CEO of FWN, who gave a history of the organization.  “After four years of recognizing the Most Influential Filipina Women in the United States, we now expand our search worldwide (in our) fifth year to honor Filipina women doing awesome work in their communities and organizations all over the world,” stated Mondejar. 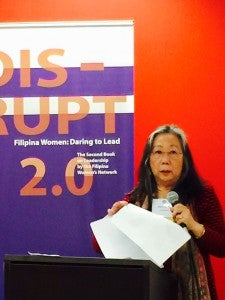 FWN invites nominations for the 100 Most Influential Filipina Women in the World Award or Global FWN100. “This award recognizes women who have risen to the most influential and/or highest positions in corporations and nonprofit/government institutions in Africa, North America, South America, Asia, Australia, Antarctica, and Europe,” added Mondejar.

(www.filipinasummit.org/nominate)Petronila P. Garcia, Philippine ambassador to Canada, gave the keynote address, saying that she joined the Department of Foreign Affairs in the 1980s, when it was only starting to accept women into the ranks.  She recalled hearing some male colleagues whisper, “Walang alam yan, kasi babae yan (She doesn’t know a thing; she’s a woman). So I went and took the MENSA test, and passed it, just to prove them wrong,” she chuckled, joined by delighted laughter from the audience. 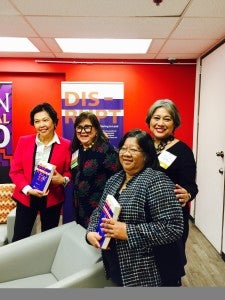 Garcia was also one of four panel members of “Conversations on the Perspectives on the Filipina in Canada.”  The other three were Dr. Cynthia Goh, appointed to Materials Science and Engineering, the Institute of Medical Science and the Munk School of Global Affairs, University of Toronto, and founder and director of the Impact Center; Atty. Maria Deanna P. Santos, barrister and solicitor, notary public, from Santos Law Office; and Agnes Manasan, program coordinator, Settlement and Education Partnership in York Region (SWIS) Catholic Community Services of York Region. 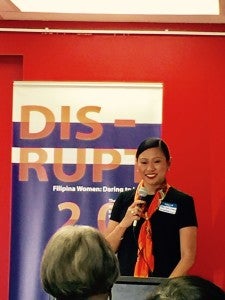 DISRUPTing Toronto also had a book launch where some authors of Disrupt and Disrupt 2.0 read their chapters to the audience.  These FWN members were part of the road trip contingent to various major cities.  The drive seeks to encourage Filipinans to attend Pinay Power 2017–14th Filipina Leadership Global Summit, October 25-29 at Intercontinental Hotel, Toronto. (www.filipinasummit.org) 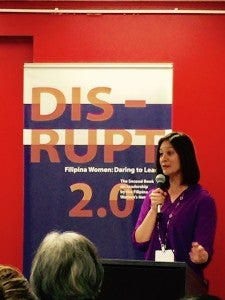 To entice Pinays worldwide to sign up for the confab, FWN floats the thought: “IMAGINE…the most influential Filipina women in the world gathered in one room.  In Toronto.  To convene a very important policy gathering.  Get ready Pinay Power 2017 is here.  10.25-10.29”