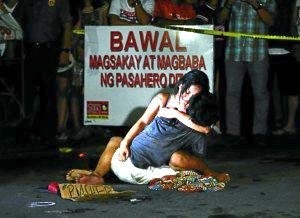 Perhaps it was a joke or maybe there was some confusion. But this year’s Pulitzer Prize announcements apparently led some of President Duterte’s fans to congratulate him for winning journalism’s top prize.

Except, of course, the Pulitzer actually went to coverage of Duterte’s crimes, for what will undoubtedly be his most enduring legacy: a carnage that has killed thousands, a mass killing aimed at poor Filipinos slaughtered in a cynical, brutal campaign inspired by Malacanang.

The New York Times photo essay that won the prize for breaking news photography was titled “They Are Slaughtering Us Like Animals.”

I guess it was when it became clear that Duterte did not win any prize, that his supporters pivoted to another attack: “Dilawang” Pulitzer was the new battle cry.

But again, it’s unclear if that too was a joke or people were serious or both. For these days, with the cacophony in social media, it’s really hard to tell. Anyone who dares to be critical of Duterte is dilawan.

Eventually, Malacanang did the smart thing. No amount of “creative imagination” can deny that an institution considered the newspaper of record in the United States was honored with a prestigious award for its disturbing portrayal of the Duterte slaughter.

Team Duterte simply acknowledged, through a statement by spokesman Ernesto Abella, that the “Pulitzer Prize Board has its own criteria and selection process and we respect their decision on this matter.”

In a hurry? Just scroll down to the photo of the girl crying in front of the coffin of her slain father. “Jimji, 6, cried out in anguish, saying “Papa” as workers moved the body of her father, Jimboy Bolasa, 25, for burial.

That’s one of the enduring images from the Duterte slaughter.

There’s another picture, more powerful. It did not win a Pulitzer. But it had a bigger impact, created a bigger stir. It’s the one featured above this column.

Photographer Raffy Lerma is just one of the many courageous, committed Filipino photojournalists who took on probably the most daunting journalism challenge in recent history: documenting the Duterte slaughter, usually in the middle of the night, in dark, isolated alleys in the Philippines’ most impoverished communities.

Because they don’t work for a U.S.-based media outlet, they are not eligible to win the Pulitzer. But they deserve even bigger honors.

In fact, even the New York Times, one of the winners of a top journalism prize, just did. The newspaper recently came out with yet another report, this time a short documentary, on the Duterte killings; this time through the eyes of one of the brave Filipino photojournalists who have been covering it: INQUIRER photojournalist Raffy Lerma.

The documentary has a gripping title: “When a President Says: I’ll Kill You.”

The video is only about 15 minutes long. But it’s tough to watch. I couldn’t watch it the first time, and finally did a few days later. I eventually discovered that my reaction was not unique. A few other friends also found it hard to continue watching.

“Mga 10 minutes into it, I was getting sick,” my friend Melanie told me. “I had to stop. Naamoy ko ang lansa.”

The comment echoed in my mind: “Naamoy ko ang lansa. I could smell the acrid odor.”

The New York Times documentary is just one of many documentaries and reports on the cruel, inhumane killings of the past 10 months. It is one of the exemplary works of journalism that will likely not convince Duterte’s diehard supporters and allies that something is very wrong with the bloody campaign their beloved leader is waging.

Duterte’s supporters, including some so-called progressive activists, are stuck in a tragic, disgusting worldview: the Duterte slaughter is getting rid of addicts and pushers. Who cares if there’s no solid proof that each and everyone of the thousands killed in the Duterte slaughter is a drug dealer or a drug addict? If Duterte and the thugs who say they are drug dealers and addicts, then that’s the truth!

Raffy Lerma and the many other courageous Filipino photojournalists deserve to be honored with a prize more prestigious and more relevant than the Pulitzers.

They’re making sure we know the Duterte slaughter, the tragic, enraging, disgusting, demoralizing, massacre inspired and instigated by a president supported by many Filipinos — it is happening.

The Duterte slaughter is real.