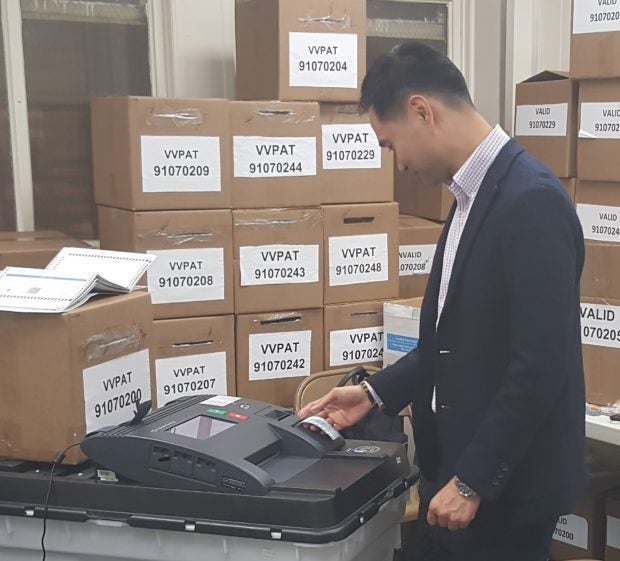 Consulate overseas voting point man Consul Dominic Imperial prints election returns in one of the three vote counting machines (VCM) to be openly posted for everyone to see and examine. INQUIRER/Jun Nucum

SAN FRANCISCO – Early results of overseas voting here show ten pro-Duterte senatorial candidates and two oppositionists leading the partial official count of the ten states under the Philippine Consulate in San Francisco, as election returns from 58 of the total 60 secure digital cards were and posted at the Consulate Social Room.

The consulate reported that two of the SD cards malfunctioned and only one of the replacements has arrived from the Commission on Elections (COMELEC) Manila as of press time. Ballots assigned to it will again be fed before an election return can be printed to be included in the official count.

Only Aquino and Roxas, who were in the last two places in the top 12, belong to the opposition Ocho Derecho. The leading party list groups, on the other hand, were ACT CIS, AA KASOSYO and Gabriela.

The Consulate estimated the number of voters who turned in their ballots at 9,000 or 15% of the 59,315 registered voters. It has the most number of registered voters among the U.S. and has jurisdiction over the states of Northern California, Northern Nevada, Washington State, Oregon, Montana, Colorado, Idaho, Utah, Wyoming and Alaska. 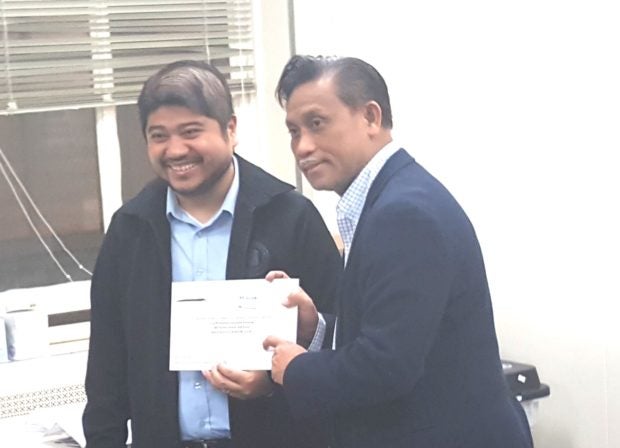 There are 241,851 registered voters in the United States of the total 1,822,173 million 2019 registered overseas voters worldwide.

“I think the reasons for the low turnout are, first, midterm election turnout is usually lower compared to the presidential election where there is much enthusiasm. Second, overseas voting still is relatively new compared to other countries that also have overseas voting. Thus, the learning curve and getting into the habit of voting is still developing. Third, in the context of life of Filipinos living in the United States, an electoral exercise is regarded as a disruption of daily routine,” Bensurto analyzed.

Even as the Consulate was able to send out all the almost 60,000 ballot packets, a number of 2,663 ballots were returned to sender. The number of voters that listed the consulate as their registered address was 408; they may not have received their ballots because of failure to notify the Consulate of the change in their addresses through either phone, email or personal visit.

Among those who went to the Consulate to get their replacement ballots were husband and wife Rad and Offie Abarrientos, who arrived at the Consulate less than hour before the deadline.

“We waited until the last day to receive our ballots by mail before deciding to go to the Consulate before closing time so we can get our ballots personally and vote,” recounted Rad.

“When it was verified that our names were on the list of registered voters, we were handed our replacement ballots that we subsequently filled-out and handed to them. The important thing is they were able to vote before the deadline.” 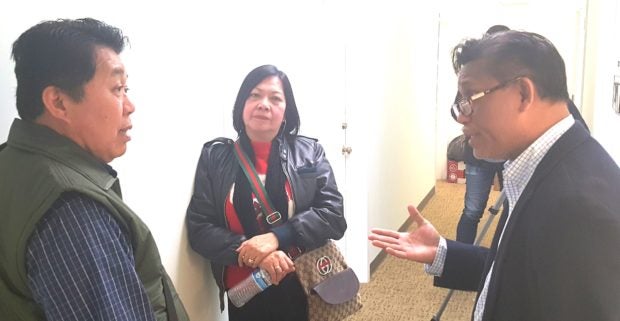 Voters Rad and Offie Abarrientos, shown here exchanging ideas with Consul General Bensurto, arrived an hour before voting ended and were able to get replacement ballots after their registrations were confirmed. INQUIRER/Jun Nucum

Bensurto said they make it a point that no registered voter is disenfranchised, so the Abarrientoses were given replacement ballots. “It is our main responsibility to make sure that each and every registered voter is given the chance to exercise the right to vote whether or not they exercise that right,” Bensurto emphasized.

In the aftermath of the polls, anti-Duterte groups in the San Francisco Bay Area lashed out at the early unofficial Philippine reports showing a shutout of opposition candidates.

“The widespread fraud and systemic voter disenfranchisement that plagued yesterday’s elections in the Philippines exposed an ugly truth: in a system that favors the ruling elite at its core, elections will be used as a tool to strengthen conditions of tyranny,” a Bayan USA statement alleged.

Friends of Akbayan USA in a statement said, “Dominated by Duterte supporters, the new Senate will be a virtual rubber stamp for the president’s extrajudicial drug war killings, assault on press freedom, imprisonment of children as adult criminals, revival of the death penalty, manipulation of the justice system to selectively prosecute critics while giving impunity to his allies, and sell-out of the country’s patrimony to neo-imperial China.”

“Duterte is positioning himself to stack up enough votes to railroad charter change (or cha-cha) to remove term limits for the presidency, solidifying his fascist dictatorship over the Philippines, much like his idol, Ferdinand Marcos did in 1972,” Bayan USA contended.

The Filipino American Human Rights Alliance (FAHRA), another group critical of President Duterte, stated that it “does not concede to the results of Philippine senatorial elections marred by electronic cheating and blatant act to disenfranchise many voters.”

“The COMELEC seven-hour delay in transmitting electoral returns to the transparency server, (incidences of) massive vote buying, delay of mailing ballots to overseas Filipinos, and other undemocratic practices put the COMELEC in a position not worthy of the public trust to conduct and oversee a fair and honest elections,” argued FAHRA. It called for the investigation on the alleged anomalies of COMELEC and pursue electoral reforms.

The same organizations have scheduled protests Friday, May 17 in front of the Philippine consulates in San Francisco and Los Angeles.