LONG BEACH, California — Millennial Lance DelaCruz, 21, travels at least three times a year to the States from his metro suburban home in Manila to visit with his immigrant family based in Long Beach.  However, unlike many college students his age, most of his summer and vacation days are spent not on the beaches or malls of California. He’s usually engaged with adults, discussing politics in his home country. 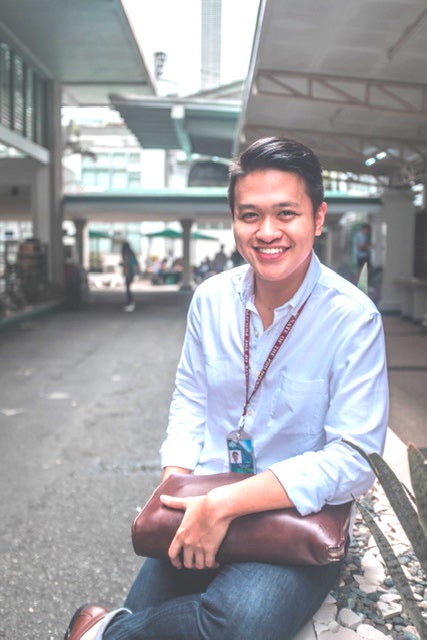 Lance DelaCruz, 21, comes to the U.S. up to three times a year to visit relatives and spends most of the time explaining the Philippine political scene. CONTRIBUTED

The young man’s parents are naturalized American citizens and have maintained their dual citizenship.

DelaCruz interned in 2016 with the Office of Senator Riza Hontiveros of Akbayan, a social democratic party-list organization in the Philippines, and has continued to this day as a youth leader of the party. (Hontiveros won her Senate seat as part of the Liberal Party ticket.)

“You could equate our views with that of newly-elected Democratic Party Congresswoman Alexandria Ocasio-Cortez from New York, who has been breaking stereotypes in politics,” DelaCruz told INQUIRER.net.

The party-list system is constitutionally mandated to give legislative seats to representatives of marginalized sectors that earn sufficient votes, the youth leader explained.

A maximum of 56 seats are reserved for party-list representatives in the elections on Monday, May 13. Fourteen party-list groups, Akbayan among them, would have been assured of one seat in the House of Representatives had the election been held in April, according to the latest Pulse Asia Survey.

The leading five party-list groups the each have garnered the maximum 3 seats in the House are Bayan Muna, Magsasaka, Gabriela Women’s Party, Ako Bicol and A Teacher. “Akbayan, since 1998, has been gaining two percent of the vote which has given the party-list one seat in the House,” DelaCruz noted.

“Akbayan worked for the universal health care law, lower medicine costs, anti-sexual harassment laws, the ratification of the Expanded Maternity Leave Law that provides 105 to 120 days of maternity leave for all working mothers. The HIV and aids policy that Akbayan campaigned for passage in the legislature took note of the alarming rate of the disease in the country.”

Dela Cruz was actively involved in the party’s youth sector campaign to pass the Free Higher Education Law in 2018 for those enrolled in state universities.

There are 1.8 million registered Filipino voters overseas, he said.  “Even though our countrymen abroad are not in the Philippines to earn decent wages to send back, they can affect who will lead the country.”

(Incumbent Senator Hontiveros, Akbayan Chairman, is slated to keynote a large gathering of Filipino Americans June 1 in commemoration of the Philippines Independence Day in Los Angeles).

Preparing for this trip back “home,” he is eager to cast his vote in the May 13 mid-term elections and like the Akbayan party-list, is ready to support the group of “Ocho Derecho,” composed of opposition candidates.

Lance has campaigned informally among family friends during get-togethers and found that most were curious about the party-list system and how beneficial it is for the people. In speaking at many gatherings in Long Beach and San Fernando Valley, he’s proud that Akbayan has significantly contributed to the passing of more than 70 laws that include those covering mental health, comprehensive agrarian reform, reproductive rights, among others.

He also noted that the youth sector makes up about 30% of the Philippines’ voting population.  “We need to be more proactive and involved especially now that our democracy is under threat,” said the 21-year- old De la Cruz.

“Many of our youths today would want to continue the gains of the Anti-Martial Law movement that led to the defeat of the dictatorship in the ‘70s and previous to that the opposition movements to liberate our country from foreign domination.”

“Today, the Kaliwa Dam that is being built, allegedly to ease water shortage, as part of the capital projects financed by dubious loans from China,” he said. Instead of employing indigenous workers from nearby areas those being hired have come from China. His party, he said, has protested the presence of thousands of mainland Chinese now working in the Philippines with questionable work permits or without them.

Some of the overseas voters interviewed by INQUIRER.net shared an interest in a common issue that DelaCruz advocates: reform.

Sokie Paulin, a naturalized citizen and entrepreneur from Los Angeles said she casts her vote via the Philippine consulate because she strongly believes that her voice is heard this way.  “I am praying for a miracle which for me means a change in the perception among the electorate that once and for all they could stand up for their best interest in mind: human rights, decency and social justice.”

Jennifer Suzara Cheng, an AP teacher in Science and Biology from San Pedro, said she votes because she cares and maintains contact with her family and friends who are still living in the old country. She believes that many Atenistas (Ateneo University where she had taught) and Bicolanos had voted by mail in the May 13 elections because they would like to make a change.  “I have been hearing from family and friends how bad it is there. I did my research as well.”

Art Garcia, one of the coordinators of the Philippine community celebration of Independence Day in LA said he and his group had sought the extension of elections beyond May 13 due to the absence of the National Citizens’ Movement for Free elections (Namfrel) in its watchdog role.  The Philippines’ Commission on Elections (Comelec) refused to give Namfrel access to its election data.

Some are not optimistic.  “Garapal na pandaraya ang mangyayari nitong eleksiyon, kung walang magbabantay,” (there will be blatant cheating if there’s no watchdog) expressed Carol Kimbrough, a former adjunct professor of a state university.

DelaCruz agreed that vigilance is always key.  Currently finishing up his dual degree in Applied Economics and Accountancy, he goes to De La Salle University (DLSU) and is vice president for External Affairs of DLSU-Tapat student organization.