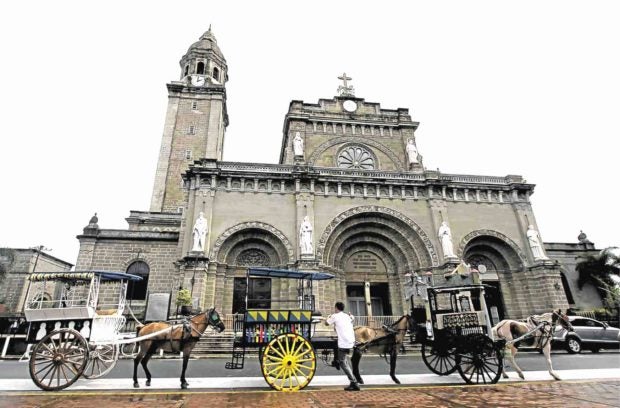 Readers see through different types of lenses to interpret the signs of the times. The Filipino Head of State used one kind of lens in his assessment of the state of the nation, calling out the Filipino Church as the “most hypocritical institution.”

Meanwhile, the Vicar of Christ on Earth used another kind of lens when he declared that “the noble Church in the Philippines now stands among the great Catholic nations in the entire world” in a letter to Manyo Cardinal Maeda dated November 15, 2018.

Which is which? The Holy Father saw a most beautiful monument of “faith and history” in the Manila Cathedral, and yet the highest official of the land saw ONLY the wounded nature of the clergy who were the ones who built the monuments of faith.

In the early 1900s, the Aglipayans straightaway filled the vacuum when the frailes Españoles left, mostly in the countryside, taking over Catholic churches, convents, properties, and lands. Proving themselves more patriotic, “more Filipino than Roman,” Catholic-educated barangay heads and principalias turned into Aglipayans.

The Philippine Independent Church (Aglipayan Church) drafted its own legislation, ordained its own clergy, officiated its own sacraments and civil marriages, and proclaimed its own saints, like Jose Rizal.

Confusion and disharmony are the works of the Father of Lies, admitted Pope Francis, referring to Christian divisions in human history (the 1054 Great Schism of the Eastern Orthodox churches, the 1500s Protestant Reformation, and the separation of the Church of England from Rome).

Admitting responsibility, the Filipino bishops collectively expressed regret and apologized “for the ambiguous stand some Church leaders held during the revolution, which partly explains the rise of the religious revolution” (Aglipayanism). The pastoral letter was signed by Archbishop Rev. Oscar V. Cruz on March 16, 1998.

The Catholic Bishops’ Conference of the Philippines (CBCP) in our time has recognized that, in this earthly pilgrimage, the Filipino Church invariably experiences her greatest strengths and also her worst weaknesses, her strengths always attributable to God alone and her weaknesses to her leaders and members.

A forgiven and forgiving Filipino

One good preparation for the 5th centenary of the arrival of the Gospel to our country is giving and receiving forgiveness, a sort of mercy-healing of historical wounds. Although easier said than done, we can aim at liberating both our personal and communal consciences from all forms of resentment and heavy-in-the-heart kind of baggage of history.

To man up, face the truth, admit errors, beg for pardon, and be committed to resolve our problems together in a peaceful dialogue are brave acts that can pave the only way towards healing and renewal – even after a defeat in any kind of competition (election included).

A forgiven and forgiving Filipino is in high spirits, even ecstatic, and brings pure joy to Inang Bayan and his fellow countrymen. A wounded healer is always a bearer of the glow of God’s grace to others.

Jose Mario Bautista Maximiano ([email protected]) is the author of The Church Can Handle the Truth: Mercy-Healing of Historical Wounds (Claretian, 2017).