Wesley So is the new US chess champion

Wesley So is the new US chess champion 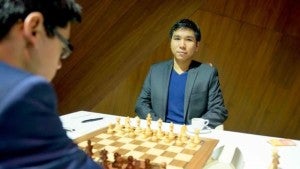 Wesley So defeated Alexander Onischuk for the US title. WEBSITE

LOUIS, Missouri — The second-rated chess player in the world is the winner of the 2017 U.S. Chess Championship.

The event, considered the most elite chess tournament in the U.S., took place over the past two weeks at the Chess Club and Scholastic Center of St. Louis.