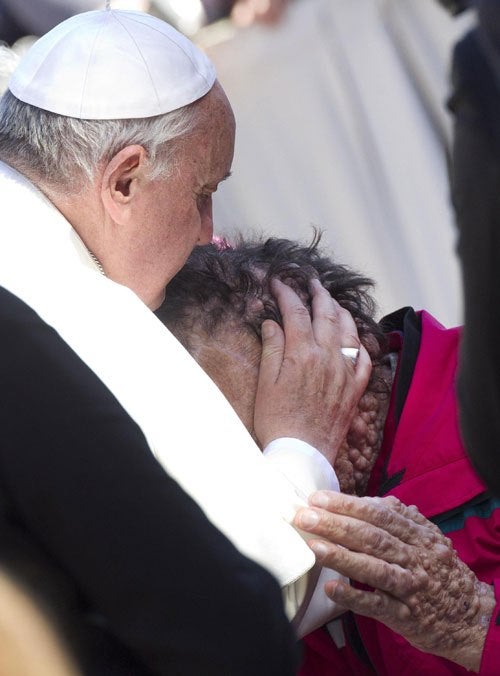 Pope St. John Paul II once provided a lovely moment to remember for a very long time. He paid a loving visit to his Turkish would-be assassin, Mehmet Ali Agca, in Rebibbia prison in Rome, not to exact vengeance, but to offer compassion.

In 1981, Agca was hell-bent on killing him. Yet, during his pastoral visit, the Holy Father was unafraid of the vulnerability that he created by living in forgiveness, literally sitting comfortably with his enemy.

If a picture speaks a thousand words, then who can forget the picture of him, still with scars of bullet wounds on his chest, sitting shoulder to shoulder with Agca in a prison cell?

Amazingly, the Holy Father’s need to share the Divine Mercy was greater than his need for personal security.

Vinicio Riva, 53 years old, suffered from a non-infectious genetic disease called neurofibromatosis, which has left him completely covered from head to toe with itchy sores, growths, and swellings.

One day, he boarded a public bus in the northern Italian town of Vicenza. He went toward the nearest vacant seat, but before he could sit down the man in the adjacent seat snapped, “Go away! Don’t sit next to me.”

“I wanted to answer back, but I controlled myself,” recalled Vinicio. “I felt my blood pressure rise.” He stayed on the bus, standing. “There were lots of people on the bus, and they heard it all, but no one said a word.”

When they went for the General Audience in the Vatican, they didn’t think they could be seated so close to Pope Francis, but the Swiss Guard kept ushering them forward until they were in the front row.

“When the Pope came close to us,” Vinicio said, “I thought he would give me his hand. Instead the Pope embraced me tightly…” (2013)

Years before, Monsignor Jeronimo Podesta, a Catholic Argentinian bishop, did something very serious, something very wrong. He fell from grace, and he fell miserably, borrowed Cupid’s wings, and violated his vow of celibacy.

What Podesta, a ranking Church leader, did brought ignominy and dishonor upon all priests of Argentina. For this, Monsignor Podesta was been judged, looked down upon and treated badly by the Catholic community, ostracized and nearly forgotten.

From being a bishop-defender of the poor to a poor man dying in misery in a second-class hospital, Podesta was alone and lonely when Cardinal Jorge Mario Bergoglio, Archbishop of Buenos Aires, paid him a visit.

Unforgiveness is a harsh tyrant when allowed to rule the hearts of men. The good Cardinal knew it, and what he brought to the dying man was God’s sweet mercy, not torture.

Scolding was absent during the short visit, in fact there was no exchange of words when Cardinal Bergoglio sat beside the prelate who was subdued by lingering sickness, lying in affliction. Agonizing. Humbled. Crestfallen.

Inside one of the poorly lit rooms of that second-class hospital, Cardinal Bergoglio gently held his scrawny hands as if holding a relic and prayed with him in silence. Only mercy was there! Compassion was present! And so much love!

One could’ve sensed crystal drops of tears rolling down Podesta’s cheeks that very moment when the sole visitor arrived and more tears flowing after the visitor left.