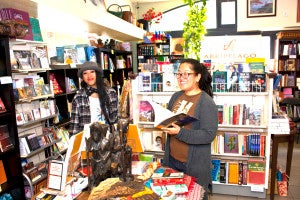 SAN FRANCISCO – Named after the group of 7,100-plus diverse islands that make up the Philippines, Arkipelago Books has stood strong as a bastion of Filipino literature and culture at the heart of the Filipino Cultural Heritage District in the South of Market for over 20 years.

Arkipelago Books went through a transition of ownership on March 18, 2017, a passing of the torch as a source of literature and knowledge of Filipino heritage and culture for future generations.

A mecca for seekers of connection with Filipino heritage, culture and psyche contained in books and various objects and works of art, Arkipelago Books is a women-owned and operated bookstore and publishing house – a circumstance that hearkens to matriarchy intrinsic in Philippine society in which true knowledge and power are ultimately nurtured and held by women.

Arkipelago Books started in San Francisco between 1994 and 1995. “It originally started as Sulu Books with my then husband,” says founder and former owner, Marie Romero. “We went our separate ways but I continued on with the business, and made it bigger and better.”

“A full service Filipino American specialty bookstore,” Arkipelago Books carries a good representation of Filipino writers in its catalog that comprises its literary Filipino identity. “Not just Filipino American writers, poets and playwrights,” but also writers from the Philippines and the diaspora.

After a stint at the Mint Mall, Arkipelago Books moved a block away to its present location at 1010 Mission Street at the Bayanihan Community Center. At the helm was Romero who, for years, had personally chosen and purchased every single book on the shelves as well as various Filipino art, objects and goods for sale.

On top of it, she also ran its publishing arm – supervising the publication of various titles and music from a number of Filipino American writers and musicians.

Romero started Arkipelago Books out of the need for Filipino literature by her and the community; not to make money, but rather, to provide children’s books by Filipino authors for her son.

Friends wanted to borrow books that she had bought for her son, and this gave her the idea to pick up more copies. Then people began asking her to get books for them. It was from these circumstances that the bookstore began and grew.

What was singlehandedly owned and run by Romero for years has now become a four-woman operation. At the forefront is Lily Prijoles, operations director, and Golda Sargento, publishing director, along with accountant Chesleyann Ebrada who is the financial director and Charity Ramilo who does community liaison and outreach. “Four women doing Marie’s job. That’s how boss Marie is,” says Sargento.

Romero is a mentor to them about all that they need to know in running the bookstore. “From industrial contracts to what she does when she first comes in, and really advising us,” says Sargento. “Letting us know that part of the job is going to the Philippines and really making connections with the purchases there. It has that much more story in it, more soul in it.”

Arkipelago has long been a destination and resource for Prijoles and Sargento from the time they knew about the bookstore when they first moved to San Francisco.

A San Diego native, Prijoles moved to San Francisco to study filmmaking. She belongs to a small percentage of Filipinos “defending why we’re taking art as a career and not nursing to our parents.”

Not having had ethnic or Filipino studies as subjects in art school, she craved for a legitimate source of knowledge about her roots and identity. Arkipelago Books filled this gap and became a resource for her yearning.

“Being able to talk to Marie and being able to read books supplemented our need to find identity in our own way,” says Prijoles. “Knowing about Arkipelago helped shape our own version of our Filipino American experience.”

Prijoles managed a branch of their family-owned Filipino restaurant in San Diego for years, but her heart was not in the food business. Selling books was something that she had always wanted to do, and had a small corner in the restaurant for books. “I had some books from Marie and I’d sell it on the side,” says Prijoles.

Sargento, a singer, songwriter and writer who also does theater work, immigrated with her parents to the United States when she was three and settled in Anchorage, Alaska, a stark contrast to the scenery and their life in Quezon City, Philippines. She moved to Washington and Oregon for college, studying English literature, eventually coming to California.

“I knew that San Francisco was the closest big city,” says Sargento who came to the city for an internship at Aunt Lute Books, a multicultural women’s press, where she learned about publishing and marketing as well as working on the production of books by Filipino Australian author Merlinda Bobis.

She learned about Arkipelago Books when it was then known as Sulu Books. “I was one of those seekers coming from Alaska,” says Sargento. It was around that time that she and Prijoles first met. They saw Romero as an elder who is supportive of the younger generation’s growth. “Marie understood where we were coming from,” says Prijoles.

SOMA Pilipinas, a 6×9 block area that make up the Filipino Cultural Heritage District in San Francisco’s South of Market, is home to Filipinos and Filipino businesses, arts and culture with the Bayanihan Community Center, at the corner of sixth and Mission streets, as its epicenter.

Not too far from the present location of Arkipelago Books is Bindlestiff Studios, a community based performance space for Filipino artists, where Prijoles and Sargento collaborated as members of the spoken word arts collective, Eighth Wonder.

In July of 2016, Prijoles moved back to San Francisco after spending a decade in the restaurant business in San Diego and learned about Romero’s plan with Arkipelago Books. “Marie was telling me that she wanted to sell the bookstore,” says Prijoles. Come November to December, “she was still looking for somebody to buy the bookstore.”

Romero was seeking new blood and young energy to take on the bookstore. With years of being a patron of Arkipelago Books with a passion for Filipino literature, Prijoles was the right candidate.

Prijoles and Sargento came together again to work on the Eighth Wonder reunion show that happened in November 4, 2016. With a rekindled connection, Prijoles asked Sargento if she wanted to join in the venture.

“When Marie asked me, I can’t do it myself,” says Prijoles. “I thought of Golda.” Sargento, who loves books herself, readily agreed. “I really believe in books, I do,” says Sargento. “It was like asking someone who loves ramen to go on a ramen adventure.”

At a time when books have been swamped by other forms of media, buying a bookstore would seem counterintuitive. But Prijoles and Sargento are not only guided by their passions, but also by the necessity of keeping an institution that has deeply enriched their lives.

“We’re working on our donations campaign right now,” says Sargento. “We mustered up our down payment and we’re just really trying to promote this new incarnation of Arkipelago. We are offering some incentives and packages for different donor levels.”

Prijoles, Sargento and company have big and exciting plans for the bookstore. They plan to implement a yearly membership program in which members will avail of discounts on every purchase, including perks such as first dibs on events and an autographed book from a selected author. Membership cards will be designed by a community of artists and will be collectible items.

They are reviving the publishing arm of the business. “That’s another resource we want to provide for people. If you wanted to produce a book, Golda’s going to edit it for you and I’ll print it and sell it,” says Prijoles. Along with publishing, they plan to put out e-books and audio books.

The bookstore will also become an art space as well as a community space in which artists can have exhibitions and community members can interact over Filipino style coffee. “There’re so many people who come to the store for different reasons… and get them to come and meet each other,” says Sargento.

As part of community building, a reading series in the bookstore is also on the list of plans. “Story time with the younger ones and a club for the young adults and adults. And getting them to inform each other,” says Sargento. “That’s kind of like the root of Arkipelago, so we really want to create that community.”

“What people think when they see Arkipelago Books is that it’s just a bookstore with old school books. We will still be supplying that bit, but we’ll also establish our goods section and non-book section,” says Prijoles. “Working closely with the arts community and have an accessories area, a home goods area, and not strictly being a bookstore but more like a marketplace.”

Prijoles and Sargento have taken their cue from Romero’s vision for the bookstore–allowing the community to inform her and inform the space. They will continue with Romero’s vision of becoming even more specialized with an LGBTQ and creative non-fiction sections.

“Arkipelago Books is a place where you could find anything that is culturally Filipino. If you’re looking for history or looking for just trinkets or something to buy, like gifts, we’re a resource of Filipino things.”

The importance of serving the community and building the faculty of critical thinking among Filipino youth is something that they recognize. “These are things that we can share,” says Sargento. “Books get old but our thirst is new. We’re still thirsty. This is not the time to stop it. It’s opening up to much more.”

After spotting some new blood to whom she passed on the flame, Romero, who will continue to be a resource, can now retire, assured that what she had built will continue to flourish and serve the community.

“It’s an exciting transition because part of me feels like this is something that I’ve always wanted to do,” says Prijoles.

“We’re ready to apply a lot of tools that we’ve learned and honor something as super legendary as Arkipelago and Marie. It’s an honor and it’s a responsibility,” says Sargento. “Marie’s built that. We’re part of that community.”