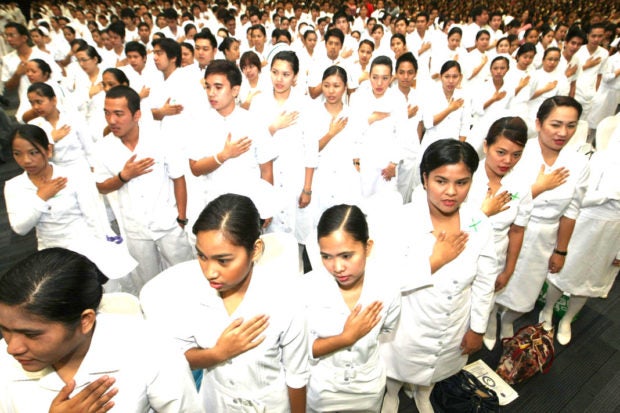 A total of 2,890 Filipino nurses hoping to practice their profession in America took the U.S. licensure examination for the first time from January to March this year, the ACTS-OFW party-list group said recently.

The total is up 46 percent versus the 1,988 Philippine-educated nurses who took the U.S. eligibility test or the NCLEX for the first time in the same three-month period in 2018, excluding repeaters, according to ACTS-OFW Rep. Aniceto Bertiz III.

“It is evident that many Filipino nurses are still raring to move into America’s highly lucrative labor market,” Bertiz said.

Citing data from the U.S. Bureau of Labor Statistics, Bertiz said Filipino nurses in American hospitals receive an average of US$6,292 (or PHP327,870) in monthly wages.

“Drawn by superior pay and their strong connectedness to the Western culture, many Filipino nurses in the United Arab Emirates and the Kingdom of Saudi Arabia are now going to Texas and California,” Bertiz said.

Based on figures from the U.S. National Council of State Boards of Nursing Inc., besides the Filipinos, 361 Indians, 310 Puerto Ricans, 228 South Koreans and 181 Nigerians also took the NCLEX for the first time from January to March.

Since passing the US$200-NCLEX is usually the final step in the U.S. nurse licensure process, the number of Filipinos taking the test for the first time is considered a good indicator of how many of them are trying to enter the profession in America.

A cumulative 189,993 Filipino nurses have taken the NCLEX for the first time since 1995, according to Bertiz.

Unofficial estimates peg at 150,000 the number of active Filipino registered nurses in America.

Despite a huge national surplus of nurses, Bertiz said the Philippines continues to produce a large number of new nurses, many of whom end up working overseas.