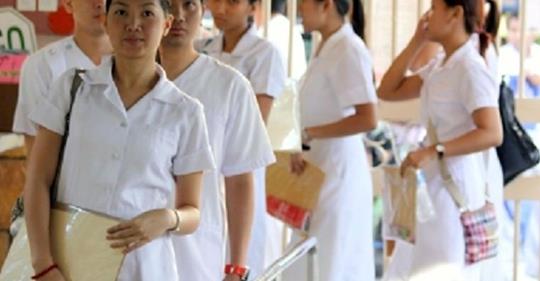 The number of Filipinos applying for nursing jobs in the U.S. remain high. INQUIRER FILE

Among foreign-educated nurses, Filipinos are still the most persistent job seekers in the United States, according to ACTS-OFW Rep. Aniceto “John” Bertiz.

He reported that 7,791 Filipino nurses took the U.S. licensure examination for the first time in 2017, hoping to practice their profession in America.

The figure is up 23 percent versus the 6,322 Philippine-educated nurses that took America’s eligibility test, or the NCLEX, for the first time in 2016.

“Without question, among foreign-educated nurses, Filipinos remain the most persistent job hunters in America,” Bertiz said.

“Compared to other countries, many Filipino nurses still prefer the U.S. because, apart from the superior hourly pay, they also find it easier to work and live there, considering our cultural affinity with America,” Bertiz added.

Since 1995, a total of 176,801 Filipino nurses have taken the NCLEX for the first time, without counting repeaters.

The NCLEX refers to the NCSBN’s National Council Licensure Examination, and the number of foreigners taking the eligibility test for the first time as strong indicators as to how many of them are trying to obtain gainful employment in America.

Nurses in America work in hospitals, physician’s offices, home healthcare services, and nursing care facilities, while others work in outpatient clinics and schools, or serve in the military, the BLS said.

Overall, the BLS said job opportunities for nurses in America are expected to be good because of employment growth and the need to replace workers who retire over the coming decade.

“However, the supply of new nurses entering the labor market has increased in recent years. This increase has resulted in competition for jobs in some areas of the country. Employers also may prefer candidates who have some related work experience or certification in a specialty area,” the BLS said.