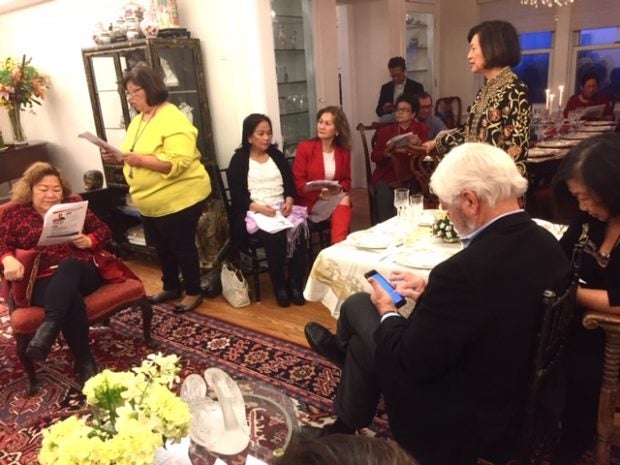 Business and civic leader Loida Nicholas Lewis (standing far right) leads in the reading of the qualifications of the eight senatorial candidates under the coalition of “Otso Diretso” during a recent fundraiser in Chicago. PINOY/Anong

CHICAGO–Philippine senatorial candidates under the coalition banner of “Otso Diretso” got a boost from responders to a call made by Filipino American leader Loida Nicholas-Lewis on April 4, to send financial contribution to the underfunded opposition slate in the coming May 13 Philippine midterm elections.

Describing the voting as a crucial moment to put a check on the Duterte Administration back home, Nicholas-Lewis pointed out the weakening of the judicial branch, the increasing move towards an autocratic executive branch and the “corrupt majority” in the Lower House of Congress. This leaves the Senate, she said, as the remaining place to fiscalize the excesses seen under the current regime.

Nicholas-Lewis who was in town to speak before a group of African American businessmen took the occasion to also mobilize former schoolmates and colleagues in civic activities to help the “most trust-worthy and qualified” senatorial aspirants to get a fair chance at winning.

Sixty-two aspirants are in the COMELEC’s official list of candidates. Opinion polls show that only candidates supported by President Duterte may make it to the top 12.

Nicholas-Lewis emphasized the need to use social media to call on voters within everyone’s circle of influence to ask them to vote for the candidates of the “Otso Diretso” coalition.  She then went over the qualifications and programs espoused by each of the eight senatorial aspirants.

Mail-in ballots have been issued by the local consulate to registered local Philippine voters. To be valid, ballots should be at the consulate by 5 a.m. on Monday, May 13, 2019.