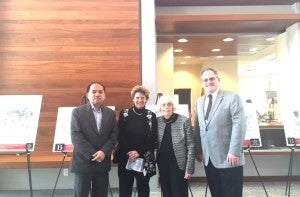 WASHINGTON, DC — The MacArthur Memorial in Norfolk, Virginia on April 9 marked the 75th anniversary of the Bataan Death March by publicly unveiling the Ben Steele Collection and showing the new documentary film Survival Through Art.

The commemoration brought together a representative from the Philippine Embassy in Washington, DC; Shirley Steele, Ben Steele’s widow; Jan Thompson, President of the American Defenders of Bataan & Corregidor Memorial Society; officials of the MacArthur Memorial, veterans, as well as the local community, including Filipino Americans.

Ben Steele was an American soldier serving in the Philippines at the beginning of World War II. He was one of tens of thousands of Filipino and American troops forced to go on the Bataan Death March. After surviving the march, he spent time in several labor camps for Prisoners of War (POW), including the infamous Tayabas Road Detail.

The Ben Steele Collection consists of sketchbooks containing graphic, compelling and gripping drawings of the Bataan Death March and of POW labor camps. The collection has been donated to the MacArthur Memorial where they will be preserved in perpetuity.

The documentary Survival Through Art was produced by Jan Thompson, and narrated by actor Alec Baldwin. It tells the story of Ben Steele’s remarkable life as a soldier, Bataan Death March survivor, husband to Shirley, and as a teacher, including to a Japanese-American who helped him transcend the hatred he initially had for the Japanese people.

In the formal program, Minister Jose Victor V. Chan-Gonzaga, representing the Philippine Embassy, delivered the welcome remarks. He noted that General MacArthur in whose honor the memorial was established and the Bataan Death March that Ben Steele so evocatively illustrates are milestones in a continuum of events in the 20th century that changed the history of our nations and the lives of the families touched by the war. He also emphasized that, more importantly, our common World War II experiences had become the foundation upon which were built over the years, the deep friendship and vital partnership between the Philippines and the United States, and their peoples.

“May I suggest that, as we reflect on the 75th anniversary of the Bataan Death March, on this glorious spring day, we affirm, we celebrate, how the stories of our two great nations have been brought together by the shared sacrifices of our soldiers in war time; and the shared commitment to democracy of our peoples in peace. We celebrate how, with our hard fought freedoms, we embrace a mutual commitment to self-determination, human rights, and respect for our common humanity,” Mr. Chan-Gonzaga said in his remarks.

The importance of Ben Steele’s drawings is perhaps best summed up by the comment of a young student interviewed for the documentary, and she said: “Mr Steele, thank you for your account. It gives the world a better idea of what happened.” One of the sketches in the Ben Steele Collection unveiled at the MacArthur Memorial. CONTRIBUTED

The Ben Steele collection will largely be presented to the public in digitized form, through the memorial’s website or the digital tables in the museum; and through reproductions in educational boards.

The MacArthur Memorial is a museum and research center dedicated to preserving and presenting the life story of General Douglas MacArthur.

April 9 of every year is also celebrated by the Philippines as Araw ng Kagitingan. ###

MOST READ
usa Ye admits he “sees good things about Hitler.”
usa Quebec coroners refuse to reopen case of Filipina, 86, found dead on hospital floor
usa 10 Signs Your Partner Is Emotionally Unavailable
usa Tenuto 2: The Only Male Vibrator Designed For Him With Her In Mind
usa Why Am I So Emotional? 10 Reasons Why and How to Handle It
usa Renaming of California school after beloved Fil-Am teacher stirs controversy
usa Kanye West reveals he caught Chris Paul with Kim Kardashian
DID YOU KNOW?
25 Best Deals for the Holidays - Gift Guide 2022
Best Crystals for Protection Against Negative Energy
Best Barbie Dollhouses 2022
Best Anime Mouse Pad 2022
5 Ways to Hack the Holidays with the Best Cash Back App
4 of the Best Holiday Gifts for Coffee Lovers