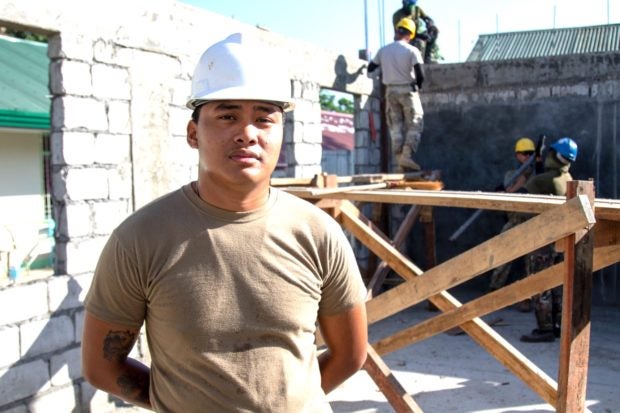 Pfc. Jason McCabe B. Dale at the school construction site near his hometown of Angeles City. (US ARMY/Sgt. Ariel Solomon)

Pfc. Jason McCabe B. Dale, who was born and raised in Angeles City, Philippines, serendipitously found that his first duty station would bring him back to his hometown to help build a school.

Dale’s company was called to do the project for Exercise Balikatan, a joint U.S.-Philippines military practice maneuver.

“Building this community is something I believe I’m supposed to be doing,” he told USArmy.mil. “I was always the activist kid. Always saying something but never doing anything. Now, I’m actually doing something.”
Dale was adopted by his aunt, Divina B. Dale, and uncle and retired U.S. Airman, James J. Dale, both of whom he proudly calls mother and father. He became a U.S. citizen in Guam at age 11.

His family returned to Angeles but going to school wasn’t always easy–his western upbringing made him an outcast of sorts. He was raised in an American neighborhood and grew up around Americans who spoke to him in English. Even his Filipino family talked to him in English, so he never developed a Filipino accent, according to the USArmy.mil report.

“Growing up, there were some Filipino kids who would think, ‘Oh, this guy’s from America. He’s not a real Filipino.’ That kind of hurt me because I grew up here just like [those] guys. I don’t have the traditional accent, but I grew up here.”

Dale studied mass communications for two years at Holy Angel University in Angeles. He was shocked when terrorists attacked the city of Marawi in Mindanao and wanted to do something to help – he enlisted in the U.S. Army.

He attended Basic Combat Training at Fort Jackson, North Carolina, and went on to Advanced Individual Training in Fort Shepard, Texas, to become a plumber. He soon received his first assignment with the 84th Engineers in Wahiawa, Hawaii, and was excited to start his life in the Army and living in America.