The Tindera and Manny Pacquiao

The Tindera and Manny Pacquiao

Critics of President Duterte’s drug war are often dismissed as clueless, out of touch with what’s happening in the Philippines. Never mind the fact that people outside the eye of a storm often perceive its devastating effects better. In any case, the author recently toured the Philippines, interviewing folks from the metropolitan areas of Manila to the remotest islands of Palawan. His articles reflect authentic conversations with the common tao – shopkeepers, taxi drivers, fishermen, et alii.  As it turns out, truth and wisdom are easier to glean from softly spoken words of simple, humble folks.

The typical reactions the author encountered were: nakakatakot (it’s scary), sobra na (it’s too much), wala nang respeto sa buhay (there is no respect for life)…Below is the continuation of the author’s conversation (in Tagalog) with the tindera at Ninoy Aquino International Airport.

“Have you been to Baclaran?” the tindera asked.  “Do you know that church?”

“If you go there, “she continued, refilling my cup of coffee, “you will see pictures of victims and things people put up to remember them. It’s a shame we treat them so badly…and yet, we call ourselves Christians, Catholics.”

“How about the Church?” I asked. “Aren’t priests and bishops protesting the extrajudicial killings?”

“Um…they are mostly silent. Afraid of the government.”

“But, Cardinal Sin led the uprising against Marcos!” I reminded her of EDSA and People Power.

“Oh? I did not know…that was before I was born.”

“It often takes a well-established institution, like the Church, to challenge government abuses.”

The tindera nodded. “Do you care for more bread or pastry, sir?”

Our conversation was getting somewhere so I did not mind the extra sugar. At the outset, she had been reticent until she was confident I was not a government agent or someone who could get her in trouble for her candor.

I thanked her for the ensaymada and asked, “How about the Vice President, Leni Robredo? Is she able to do anything to alleviate the situation?”

“Ah…we don’t hear about her anymore,” she lamented. “She is out of the picture. All we hear now is Senator Manny Pacquiao. He is very popular. He has brought honor to our country. But, does he have a college degree? Is he educated enough to be a senator?”

“Well, Manny Pacquiao dropped out of high school because of poverty,” I told her. “He passed a high school equivalency exam and earned a high school diploma. He enrolled at Notre Dame of Dadiangas University to study business management. Manny has also been awarded an Honorary Degree by Southwestern University.”

“Yes, but that seems different from a college graduate or professional who has taken and passed difficult qualifying exams, don’t you think? Solving our national problems takes more skills and competence than boxing. And I say that acknowledging that he is a great boxer and athlete.” She left to attend to another customer. 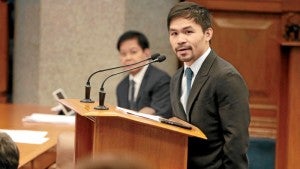 When she returned, I asked her. “Don’t you think Duterte, a lawyer and prosecutor, can solve our national problems?”

The tindera smiled. “The President  seems all talk. He talks about free medical care. He talks about improving traffic. But, we do not see his plans materializing. It’s more like hinigpitan tayo (he is constraining us). Duterte is tightening things too much. Our freedoms are stifled.”

“But, I thought the majority of people are happy that Duterte is solving the drug problem and criminality.”

“But at what cost? Our problems cannot be solved by killings. What will be accomplished by killing more and more people?”

“Isn’t the economy better?” I asked. “Isn’t that the reason people tolerate or approve of the drug war?”

“I do not think the economy is better since Duterte became president.  The dollar exchange now is up to P49-50 from P45. But, even if the economy were better, life is more important than money, don’t you agree?”

“We can always work to earn money,” she pointed out. “But once life is taken away, it’s gone. And think about the families left behind – the wife and children are nakakaawa (in worse, pitiful situation). We cannot solve economic problems by killing more and more people.”

“Isn’t the government providing housing for the poor?”

“Yes, Manny Pacquiao wants to give homes to random recipients. But why random, people ask? Why not give houses first to those who desperately need them?”

“Don’t you want Manny Pacquiao to give you a free house?” I chided her.

“Of course, but there are people who need more help.”

“May I ask, how much your salary is?”

“Yes, we have some benefits.  So, we are fine. After work, if we have left over bread and pastries, we bring them home to give to our neighbors. They are grateful.”

I was grateful too that I had the occasion to speak with an honest and hardworking Filipina. It was encouraging to meet someone with a sensitivity to what was happening to the nation. And someone who was not afraid to say what was on her mind.

I told her so and returned to my departure gate. As I walked back, who should I see but Senator Manny Pacquiao rushing to catch an earlier flight. He had a retinue of very busy looking guys with prominent cell phones and earpieces.

I waved and greeted the senator and boxing champ. Manny Pacquiao waved back and smiled.