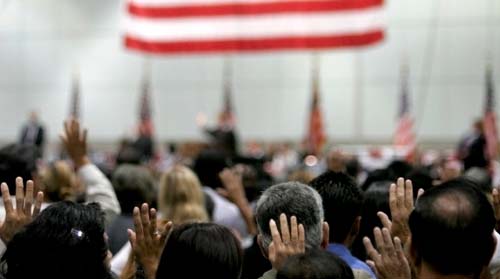 In March 2008, my life took a big turn when I moved to the United States from the Philippines. I was full of hope as I stepped off the plane in Los Angeles. The warm air reminded me of home, but that familiarity quickly disappeared as I found myself in America’s second biggest city.

In my rural hometown of Pampanga most houses were unpainted, made of cheap materials and in desperate need of repair. Not everyone in my neighborhood had access to clean drinking water and with the high cost of household appliances, few could afford to own an electric stove. It was a huge contrast to Los Angeles, with its massive buildings, electric grids for miles on end and people from all over the world.

I found it hard to interact with the people around me. I spoke very little English and mostly talked with my Filipino neighbors to get me through the day. Words can’t describe how hard it was being half a world away from my four beautiful children and my loving wife. I couldn’t afford to sponsor them on my own, but a dear friend I met a few years after moving to the U.S. gave me a wonderful gift and offered to be the legal sponsor of three of my kids.

After four years, I was able to get visas for my three youngest children to come to live with me in the U.S. They adjusted to American life quickly and had no problem making friends with the people in our neighborhood in Koreatown.

For me, it was a different story. By then, I was in my mid-70s and retired, and even though I had my kids with me, I missed my wife and oldest son, Florencio – who stayed in the Philippines with his mom. I felt disconnected from the community around me, like a stranger in my new home.

Things began to change for me thanks to my neighbor Juliet, a fellow Filipino, who told me about the Filipino American Service Group (FASGI). I was excited to find ways to get involved with the Filipino community in LA and I called FASGI right away and became a volunteer.

At Christmas, I helped make handcrafted “parols,” star-shaped lanterns that are iconic symbols of a Philippine Christmas. I also helped clean FASGI’s garden and office space and made friends with many Filipino Americans along the way. It felt great to work with FASGI and help others stay connected to the Philippine culture.

Many of us had similar hopes and dreams of coming to the U.S. for a better life, but our struggles were different. For me, I wanted to be able to bring my wife to join me and my children in the U.S. My kids needed their mother around. Talking to her on the phone wasn’t nearly as good as having her here. But to petition for my wife to come to the U.S., I needed to be a U.S. citizen.

There were two problems: I was 79 years old and I did not speak very much English and I couldn’t afford to apply. Becoming a citizen seemed like it would be very difficult. I was wrong.

The people of FASGI – especially Yey Coronel – stopped at nothing to help me get my citizenship. They gave me lots of information for my USCIS interview, practiced speaking English with me and encouraged me to practice with my neighbors. They even filed my citizenship application for me. But what I am most thankful about is that FASGI helped me apply as a low-income resident so that I did not have to pay the application fee. Because of FASGI, getting U.S. citizenship was within my reach.

On March 16, 2016, I became a U.S. citizen. I cannot even explain how happy I was that day. And it was only possible because of FASGI’s help and support. Now, I can petition for my wife to join our family in the U.S. and that hope I felt when I first landed in LA has been restored.

Now, I can travel back to the Philippines whenever I want for however long I want. I can vote in elections, which is something I have looked forward to since arriving in the U.S. And, I am part of a country that takes care of its senior community members and lower-income residents.

My journey to become a citizen was worth it. The best part is when my children tell me how happy they are that I was able to bring them here because now they “can give themselves a better future.” And soon, I get to watch them become U.S. citizens and experience the full benefits this country has to offer – just like I have.

For more information on how to become a U.S. citizen, visit the New Americans Campaign at newamericanscampaign.org.