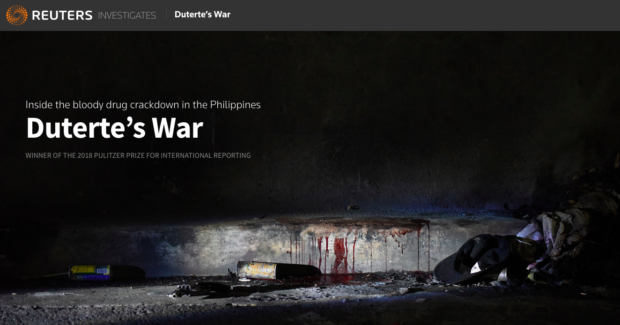 For the first time since Rodrigo Duterte became president, no Pulitzer Prize was awarded for coverage of his administration, triggering howls of protest from Malacanang.

‘This is outrageous! We will protest this!’ Duterte reportedly said in a cabinet meeting. “Mga walanghiya sila!”

Unlike the previous two years, the 2019 Pulitzer Prizes, which were awarded this week, did not include coverage of the Philippine leader.

“We are very disappointed with the Pulitzer Prize committee which has clearly failed to see the exciting journalism being produced due to the continuing impressive newsworthiness of the Duterte era in the Philippines,” Duterte Spokesman Sal Panelo said. “We were hoping for a Pulitzer for every year of Tatay Digong’s reign. Sayang naman.”

Duterte had been on a roll with the awarding of back-to-back Pulitzers for the reporting on his government.

In 2017, the New York Times won the Pulitzer for breaking news photography for “They Are Slaughtering Us Like Animals,” which was praised “for powerful storytelling … showing the callous disregard for human life in the Philippines brought about by a government assault on drug dealers and users.”

This year, the Pulitzer for international reporting went to coverage of abuse and suffering in Yemen and Myanmar. The award was shared by the Associated Press and Reuters.

The AP won for “a revelatory yearlong series detailing the atrocities of the war in Yemen, including theft of food aid, deployment of child soldiers and torture of prisoners,” while Reuters again won for “expertly exposing the military units and Buddhist villagers responsible for the systematic expulsion and murder of Rohingya Muslims from Myanmar, courageous coverage that landed its reporters in prison.”

In presenting the award to Reuters, the Pulitzer Committee cited the contributions of detained journalists Wa Lone and Kyaw Soe Oo, who were also among the Time Persons of the Year, together with Rappler editor Maria Ressa.