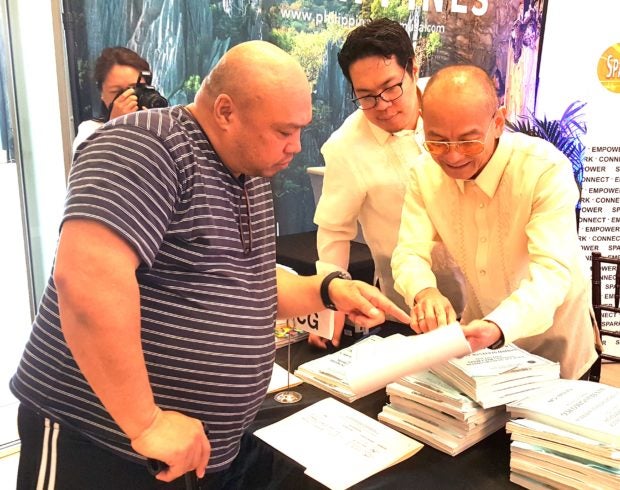 San Leandro resident Reynaldo Magdale Jr. hoped to be the first to personally vote but was told that his ballots were already sent by mail. INQUIRER/Jun Nucum

SAN FRANCISCO – Worldwide overseas voting for the May 13, 2019 Philippine midterm elections formally started on Saturday, April 13, with Commission on Elections (COMELEC) commissioner-in-charge of overseas voting and voter’s education Rowena Guanzon signaling the opening of the month-long polls at a ceremony at the Philippine Consulate.

Guanzon explained that the Commission decided to launch this year’s midterm worldwide absentee voting in San Francisco “not only because of its large number of voters, but also because of the performance of this post in terms of (having) trained (personnel) and (their) capacity to manage elections.”

On hand to welcome Guanzon were consulate officials and staff led by Deputy Consul-General Raquel Solano, who is in charge of the Bay Area voting, together with Consul Dominic Xavier Imperial.

The Philippine Consulate in San Francisco election team will be handling the overseas voting and canvassing in the May midterm elections. INQUIRER/Jun Nucum

Solano remarked that the Philippine Consulate in San Francisco is responsible for ensuring that the 59,315 registered voters (including seafarers) in their ten-state consular jurisdiction received their ballots on time and cast their votes from April 13 to May 13, 2019.

“We need to ensure that their votes are counted, canvassed, and transmitted in accordance with established laws, rules and regulations. We are mandated to help bring about free, honest, orderly and peaceful elections,” Solano explained.

The names of eligible voters are in these Certified List of Voters (CLOV) in the Philippine Center Building. INQUIRER/Jun Nucum

“We recognize the need to work doubly hard to ensure a higher voter turnout and as much as possible to exceed the 2016 turnout. In this regard,” she added.

A huge majority of the San Francisco overseas voters got their ballots by mail, which must be mailed back to the consulate by 6:00 p.m. of May 13, 2019 Philippine time. 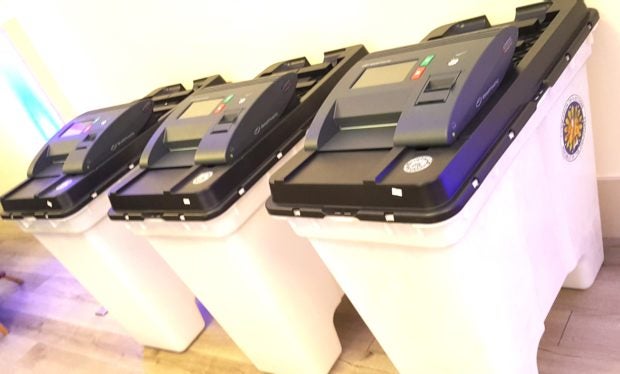 Three Vote Counting Machines (VCM) are available for use in the May 13, 2019 midterm elections at the Philippine Center Building. INQUIRER/Jun Nucum

“The overseas vote is very important. It can elect the twelfth winning senator. Every Filipino vote abroad is like times five because they he or she is likely to influence relatives at home to whom they send money. It is important that they choose their senators based on reason and not because they are popular,” Guanzon pointed out. 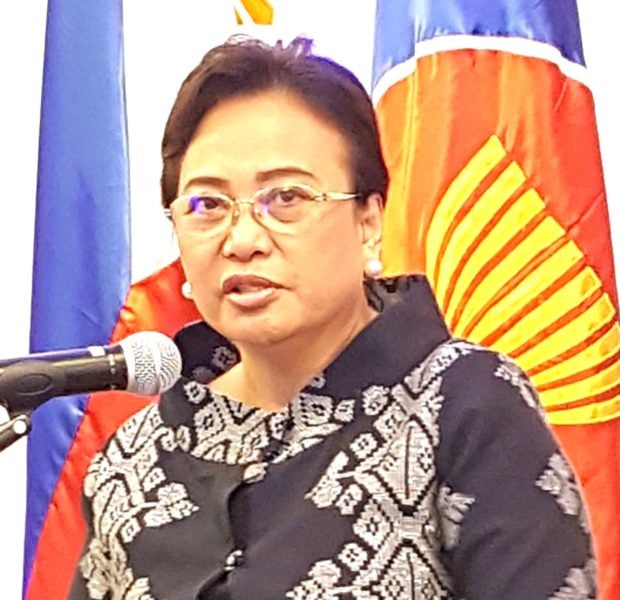 “It is incumbent on the posts to generate interest of Filipino voters overseas. It is our duty to reach out and communicate with voters in whatever way possible that the senatorial elections are as important as the presidential elections because the Senate is a very important institution in balancing of power in a democracy. The Senate, therefore, should be composed of senators who have this sense of democratic independence and competence,” stressed Guanzon.

She also reminded that the Senate has the power to sign treaties as part of its inherent power to deal with international relations that affect lives of Filipinos abroad on jobs, trade, and economy, among others. 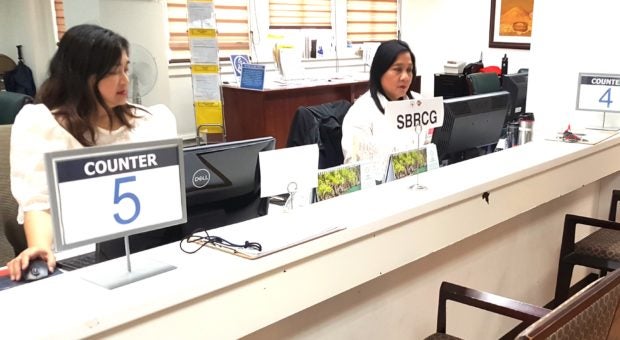 The consulate special board of reception and custody group (SBRCG) at the Philippine Center Building 2nd floor is tasked to receive filled ballots from voters submitting mailed-in ballots. INQUIRER/Jun Nucum

Guanzon also mentioned the importance of social media in reaching voters with information about the candidates because about 70% of current voters are less than 40 years old, of whom 80% use social media like Facebook, Instagram and Twitter.

And with the use of social media by almost anyone who has access to internet, Guanzon underscored the important role that the consulates play in providing the Filipinos within their jurisdiction on what is happening and latest developments with correct information.

“We in the COMELEC fight fake news because it erodes our democratic principles. People cannot make an informed choice if they bombarded with fake news every day. Together with media, let us make sure that news is accurate and has a reasonable basis. We should all fight fake news,” urged Guanzon.

She also wants the Facebook accounts of all consulates and embassies to be active every day and have pictures of those casting their ballots posted in the consulate’s Facebook account, with the permission of the voter, to generate awareness and drum up more interest among other voters who have yet to cast their votes.

Since overseas voting involved not only voting for twelve senators but also for one party-list group, Guanzon also reminded overseas voters to determine which party-list to vote based on what they stand for and their track record. 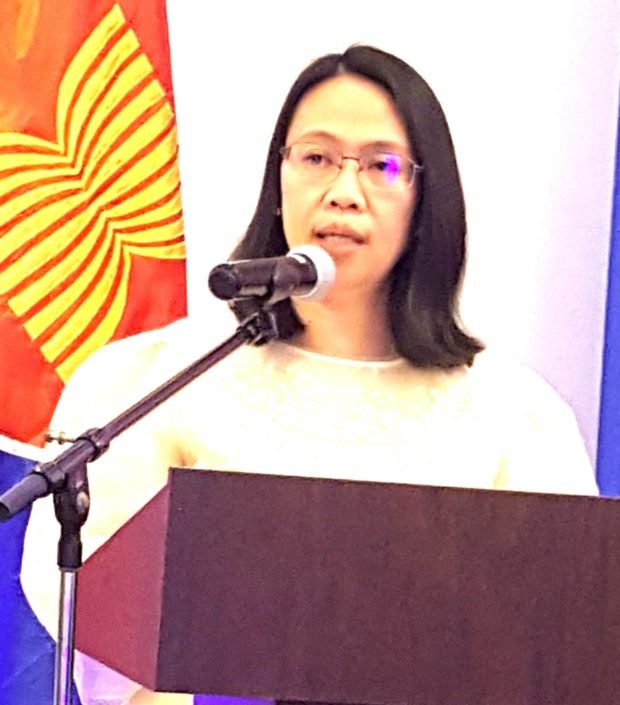 “The alarming thing, though, is that more than a majority of these party-list representatives are very rich. But because of the Supreme Court decision, one need not be a tricycle driver to represent a tricycle driver’s association. That is one fact we have to accept,” Guanzon rued.

Guanzon also shared that as much as they want to make use of the latest technology in the conduct of elections, they have to make sure that the security of the process is improved and that their data are secured so that the integrity of the election is not compromised by hacking.

“We were also victims of hacking (in April 2016 when a fresh information technology graduate hacked the COMELEC website). Because of this, the Department of Science and Technology (DOST) is now hosting our website to ensure that hacking from inside the COMELEC is no longer possible,” assured Guanzon. 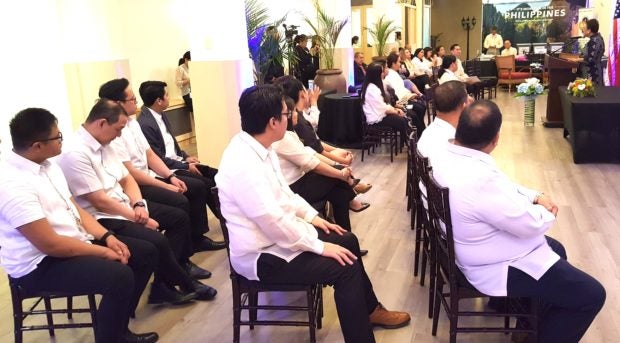 It will have a batch feeding of ballots on Mondays and Thursdays within the voting period and at the 5th floor of the Philippine Center Building which is open to the public and canvassing will take place only after voting hours in the Philippines.