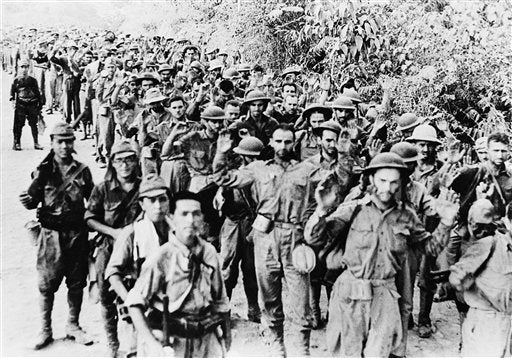 If you mention the Bataan Death March, people nod like they know it.

Maybe from the movie. Or from someone mentioning it in passing. For sure, they know the three words. It was in Bataan. And men died while marching.

Oh yeah, it happened during World War II. A long time ago.

This year in California, the move is just about complete to make sure there’s something in at least the high school history curriculum about the Bataan Death March.

And it’s important that all Filipinos know a little something about it.

On the weekend after Donald Trump showed the world how emotional he was seeing the “beautiful babies” suffer from Bashar al-Assad’s gas attack on his own people; I’m hoping to hear the Trumpster take a moment to mention April 9, 1942.

That’s the day 75 years ago, the Bataan Death March began.

One can debate whether Assad is guilty of a war crime. Or whether it justified Trump’s brand of humanitarianism—60 cruise missiles aimed at a Syrian airfield.

But there’s no debate over this:  The Bataan Death March was a horrific atrocity, judged a war crime for which General Masaharu Homma of the Japanese Royal Army was convicted and executed.

He was the man behind the march that April day that marks the largest surrender of U.S. forces in history, the end of the U.S Army Forces in the Far East (USAFFE)’s defense of the Bataan peninsula in World War II.

The Japanese captured more than 75,000 Filipino and American troops.

Despite the availability of transport and supplies, the Japanese marched their prisoners in the blazing heat as a form of torture.

The POWs were given no food. No water.

And if you stopped marching, you were beheaded or speared with a bayonet.

The casualties may tell the story why America has often let Bataan wither from the memory.

Historical accounts put the casualties from the march alone at 10,000 Filipinos.

Some 650 Americans are said to have died during the march.

The 10,000 Filipinos who died were mostly young men who had answered President Franklin Roosevelt’s call and joined the sub-group of U.S. forces, the USAFFE. They were promised U.S. citizenship and benefits, but then later denied all of that in the Rescission Act.

No wonder the United States would like to see Bataan go away as a bad memory.

The United States had promised reinforcements would come well before April 9.  But then it decided Europe would be prioritized. It meant the USAFFE fighters and the American troops who were securing the Bataan Peninsula to protect Manila Bay were essentially abandoned, as General Douglas MacArthur retreated away from the Philippines.

Some who survived returned the Death March fought on in the resistance as guerrillas. The real lucky ones were those who stayed alive long enough to see the America make good on its promise. A­­­­­fter decades of stalling, the Filipino Vets of WWII were made whole when President Obama paid out lump sum payments to the veterans in 2009.

And then there was an even luckier group that included Jesse Baltazar, who managed to escape the march, and was able to get to the United States where he joined the regular U.S. military. Baltazar joined the U.S.  Air Force. He retired as a major in 1966.  Last year, Baltazar, who was active in fighting for Filipino veterans rights died of cancer. He was 95.

Bataan was like the Alamo, Dan Gonzalez, an Asian American history professor at San Francisco State University told me in my recent podcast.

Even in surrender it was the Filipinos finest moment, showing the loyalty of Filipinos to the United States.

Of course, they were a colonized people in a colonial army, often treated as second-class citizens by the U.S. Army regulars.

To the Filipinos already in America who had managed to get here as nationals, it was an opportunity to not only show loyalty to their new home, but to go back to the Philippines to protect their ancestral home.

It is the one piece of U.S. Filipino history that deserves never to be forgotten.

Unfortunately, the most enduring memories may be the John Wayne movie “Back to Bataan,” where the Filipino hero is played by the Mexican American actor Anthony Quinn.

Nevertheless, the effort to return Bataan to the history curriculum in California couldn’t come at a better time.

You want to talk war crimes?

Frankly, I don’t buy Trump’s justification for his Syrian air strikes. Pictures of dead babies moved him? And yet he’s exhibited a callousness to Syrian refugees over the last year?

Trump is a showman and an opportunist.

The Assad attack simply gives him cover to do what he did, a small surgical strike to send multiple messages.

Obviously, it sends a message to Assad, and his enablers, Russia.

It’s also meant to dispel those who think the Trump-Putin Bromance and Trump Russian connections smell of treason.

How convenient. A way to show off to China who has influence with North Korea.

Finally, there’s a message to all the pollsters. After a failure to repeal Obamacare, and failed attempts at a travel ban, Trump’s approval ratings dropped to 35 percent as the week started.

What better way to boost ratings but with an aggressive dose of cruise missile Viagra?

And all of it, under the cover of being so emotionally moved by the “beautiful babies” of Syria that he just had to take military action.

He should see the old pictures of marchers starved to death and bayoneted in Bataan.

Those are bona fide war crimes that seem to be slipping away from our collective memories.

It’s definitely worth a mention on the April 9, the 75th anniversary. The U.S. Army may want to forget it because of how it created the whole scenario in the first place. But for the 10,000 Filipinos who died in the Bataan Death March, it is a historical high point in Filipino valor and loyalty to the U.S.-Philippine relationship.

Emil Guillermo is an award-winning journalist and commentator based in Northern California. Contact him at www.twitter.com/emilamok