Daren B. Harris waited outside the arena before the doors opened with his grandmother and other family members, who wore black T-shirts with Nipsey Hussle’s face on them. Harris said he grew up listening the rapper’s music and followed his journey to improve his community.

“This is a once in a lifetime thing,” said Harris, 23, who lives in South Los Angeles. “Everything that happened is so impromptu. We are all taking it in all at once. He was a treasure.”

Harris’ grandmother, Reba Johnson, said she couldn’t miss the occasion to celebrate Hussle’s life. “He was bigger than his music” she said.

More than 20,000 people are expected to attend the service, with thousands more paying their respects to the late rapper during a 25-mile procession through the city.

Books with an image of Hussle on the cover were handed out to service attendees. The book of nearly 100 pages contained numerous photos of Hussle with his fiancée Lauren London, his children, Russell Westbrook and Snoop Dogg. It also had heartfelt messages from Rick Ross, The Game and Lebron James.

“I’ve never cried myself to sleep over any public figure before, but Nipsey’s presence meant so much for our community,” actress Issa Rae said in her message inside the book. 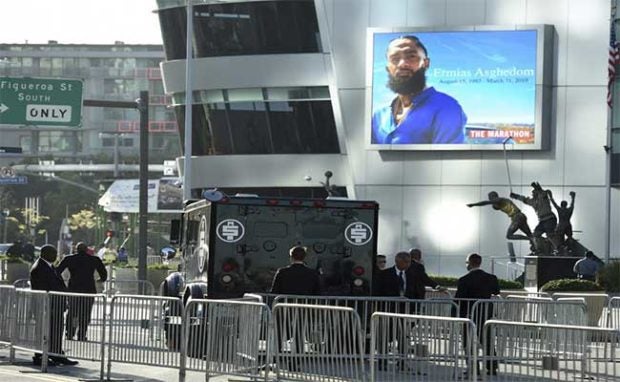 The Nipsey Hussle’s Celebration of Life ceremony will be begin at 10 a.m. No details have been released about dignitaries and celebrities who will attend, perform or speak. The event will be livestreamed on BET News’ Facebook page.

The hearse carrying Hussle’s coffin from the Staples Center will then travel deep into the neighborhood where the deadly Rodney King race riot began in 1992 and on past the property where Hussle had planned to turn an aging strip mall into new businesses and affordable homes. Finally, it will arrive at a funeral home in the city’s hard-scrabble Crenshaw district, where the rapper was born on Aug. 15, 1985.

Hussle was shot to death March 31 while standing outside The Marathon, his South Los Angeles clothing store, not far from where the rapper grew up. The store will be one of the places where Hussle’s casket passes during the procession through South Los Angeles.

Eric R. Holder Jr., who has been charged with killing Hussle, has pleaded not guilty. Police have said Holder and Hussle had several interactions the day of the shooting and have described it as being the result of a personal dispute.

The 33-year-old Grammy-nominated rapper, whose real name was Ermias Asghedom, was an Eritrean-American father of two who was engaged to actress Lauren London. He was a beloved figure for his philanthropic work that went well beyond the usual celebrity “giving back” ethos. Following his death, political and community leaders were as quick and effusive in their praise as his fellow hip-hop artists.

Hussle recently purchased the strip mall where The Marathon is located and planned to redevelop it into a mixed-use commercial and residential complex. The plan was part of Hussle’s broader ambitions to remake the neighborhood where he grew up and attempt to break the cycle of gang life that lured him in when he was younger.

For a decade, Hussle released much sought-after mixtapes that he sold out of the trunk of his car, helping him create a buzz and gain respect from rap purists and his peers. His said his stage name, a play on the 1960s and ’70s rhyming standup comic Nipsey Russell, was given to him as a teen by an older friend because he was such a go-getter — always hustling.

Last year he hit new heights with “Victory Lap,” his critically acclaimed major-label debut album on Atlantic Records that made several critics’ best-of lists. The album debuted at No. 4 on Billboard’s 200 albums charts and features collaborations with Kendrick Lamar and CeeLo Green.

It earned him a Grammy nomination, though he lost out to Cardi B’s “Invasion of Privacy.”

Hussle was also a wildly popular figure among professional athletes, especially those based in LA, where he was a regular on the sidelines. Players admired him for his community building.