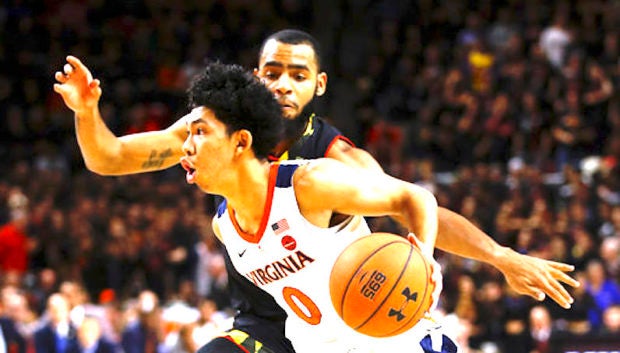 “It’s a big deal for Fil-Am youth basketball players, who are often told that they lack the skill, height or athleticism to make it in elite high school or college basketball programs,” says an FYBA Facebook post.

Moreover: “Coaches won’t admit it, but many have a subconscious bias against Filipino or Asian basketball players in that they don’t really believe Filipino and Asians can excel at the highest levels. 5’9” Fil-Am Kihei absolutely DESTROYS these myths. He is the second Fil-Am in history to play for an NCAA Men’s Basketball Championship Team. Kudos to UVA Head Coach Tony Bennett for recognizing Kihei’s talent and determination. #HeartOverHeight #FilAmsCanPlay.”

Mark Pulido, Filipino American Mayor of Cerritos, California, chimed in with elation on Facebook: “Very proud of brother Kihei Clark, representing us well as a true champion. Inspiring to hear of his family’s Hilo, Hawai’i and Ilocos roots. Loved watching him make the play of the tournament (last second pass to Mamadi Diakite for the jumper at the end of regulation that sent the game to overtime for the 80-75 win.)

“I always have something to prove,” Clark said in an interview with Ben Bolch of the Los Angeles Times.  “Being my size, I never pass the eye test.”

His career trajectory nearly suffered as a result. Clark starred for Woodland Hills Taft High but appeared headed for the college basketball hinterlands, originally committing to UC Davis. Recruiters who came to see him always departed with the same reservations.

“Every single one said he was too small,” said Derrick Taylor, Clark’s high school coach, “and it didn’t matter how productive he was.”

Taylor told them to take another look. This was a player who was tough enough to hold up along the bottom of his team’s 2-3 zone defense, often out-rebounding counterparts who were several inches taller.

His bulldog mentality had come in large part from his father, Malik, a 5-10½ guard who played for the University of Hawaii-Hilo and named his son after the city on the island of Maui where he had proposed to his wife.

Malik knew all about facing doubts. That’s why he taught his son how to stay in front of the player he was defending and to always pick up full court.

So maybe it should have come as no surprise that a guard who chased down the opening tipoff in a high school all-star game found Clark standing only inches away, seconds into a largely meaningless game.

“The kid’s comment was, ‘Really, Kihei?’ ” Taylor recalled with a chuckle.

Yes, really. Going all-out is the only way Clark knows how to play.

Interest in him skyrocketed after he was named the most valuable player of the Peach Jam, a prominent summer club tournament. UCLA was among the suitors but never offered a scholarship because it was already committed to other players.

“I was technically their last option if they were trying to recruit me that late and Virginia jumped on right away,” Clark said, “so that’s where I wanted to be.”