LeBron passed Kobe Bryant by being the youngest player in the history of the NBA to reach 28,000 points. LeBron also passed Kobe in three-point shots made in the post-season. After looking at the stats, it seems that Kobe is not a better shooter; LeBron is the champion on paper.

Is Lebron Better Than Kobe? – The Beast Kobe is definitely a much better free throw shooter than LeBron. However, LeBron has been the better three-point shooter, and has consistently evolved as an offensive threat. He comes up with all kinds of ways to score points. When LeBron is in the inside, he is super powerful and very skilled. He is extremely dominant on the inside. He is great at passing, has great prowess, and there have been times where he can’t be stopped.

James can take charge of the court like no other player in the game. He is hard to defend against, and is often times an unmatchable force on the court. The skillset that LeBron has acquired over the course of his career in the basketball industry has given him an arsenal of tools to use during game time.

LeBron is very efficient, and when comparing Kobe’s and LeBron’s stats, you can see the difference. 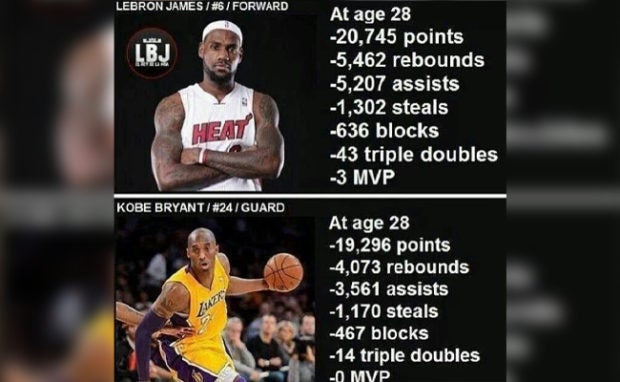 The passing ability that Kobe has shown throughout his career is amazing, but LeBron can do it too. Kobe feels that LeBron has always passed the ball too much.

LeBron James is very efficient; he gets the job done. He has strengths and weaknesses, just like everyone else. He can make shots from basically anywhere on the court. When he is in transition, he cannot be contained.

Kobe has been more of the defender than LeBron. James has great abilities that give him the capacity to recover shots. LeBron has been able to play every position on the court. He can play defense and offense at any time.

Both of these players are great at jumping the passing lanes, however, LeBron has the ability to transition better on defense. LeBron has more of his own signature moves compared to Kobe’s routine style. 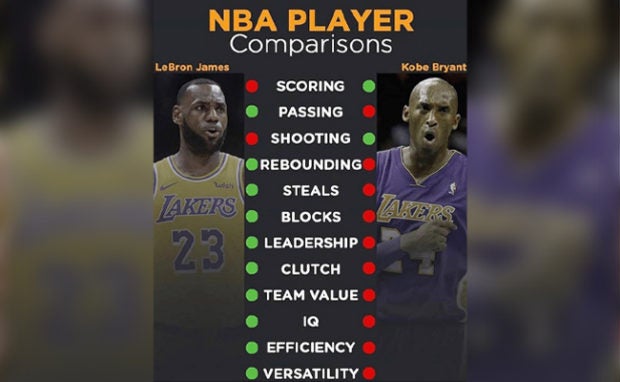 Mentally, there are a lot of similarities between these two key basketball stars. They both strive to be great, and strive to be the best. In fact, they are both very obsessed with this. They do have different ways of achieving this ultimate status. Kobe had more of the “do-it- myself” mentality. LeBron James has more of the team player attitude. They both played with the desire to win every game that they possibly could.

LeBron James is more about business off the court, and has a little bit of Hollywood to him. Kobe Bryant is a cultural icon that matches LeBron off of the court because he has a huge fan base. They are all extremely loyal too.

LeBron has a great reputation, and he has gone above and beyond to give education to children and adults through the LeBron James family foundation. It is a scholarship opportunity available at the University of Akron. He also has a school in Akron for children who are living in poverty, and who need a better place for their education.

Kobe Bryant does not have these endeavors completed like LeBron. Kobe has actually had a foggy off-court history, but he has been a great NBA ambassador. He praises the NBA daily, and has never put anyone in the game down.

Is Lebron Better Than Kobe? – Who is King of the Clutch? 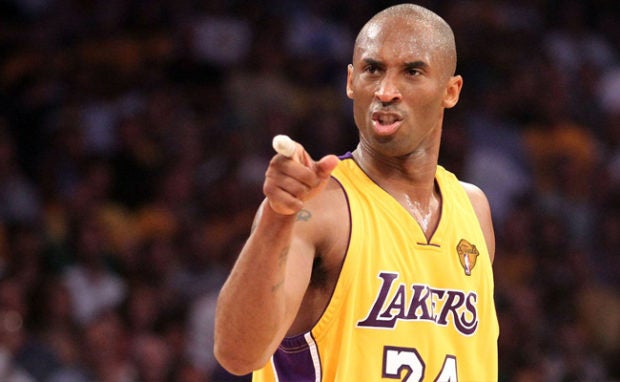 During the regular season, Kobe has been extremely clutch and has had many clutch times when he won the game with ease. LeBron James has a 19.6% success of made shots within the last five seconds or less, in the 4th quarter or overtime in regular season games. Looking at Kobe Bryant, he has knocked down 25.2% of the same shots in the regular season.

Since postseason is a little bit more important than the regular season, and should show the best of these players, it shows that James is much more clutch than Kobe Bryant is.

Is Lebron Better Than Kobe? – Lord of the Rings

LeBron’s last two finals were pretty doomed. If LeBron reaches five rings, and can defeat the Warriors, he could be just as good as Kobe.

James does pass Kobe in assists, rebounds, blocks, steals, and three-pointers in the post season, while having better efficiency on the field and an expanded three-point range.

James has been an insurmountable force on the court, and is one of the NBA’s biggest leaders off of the court. He is very clutch in the bigger moments, and has a unique team attitude to make it all work together. LeBron does not really have to do anything else to be better than Kobe. They are both great in their own rights, and since LeBron still has some years left in the NBA, he may further expand on his already extremely successful career.