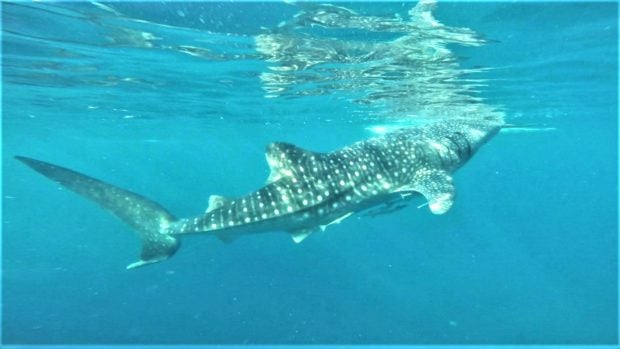 Local Filipino tourists and international visitors to the Philippines who have done their research will most likely have “swimming with Oslob whale sharks” as a top bucket list item. After all, how many whales or sharks in the world can one gently interact with, minus the risk of getting bitten or eaten?

Tourists and balikbayans can reach Oslob via Cebu to which there are direct flights from the United States; there are also easy connections from Manila to local destinations. Another way to get to Oslob is via Dumaguete airport, where Oslob island is a short 45-minute banca ride versus the 3-hours road trip from Cebu. An overnight stay at Oslob town is another option for early swimmers.

Locally known as butanding, whale sharks (rhincodon typus) are the world’s largest fish measuring up to 18 meters and weighing up to 34 tons. They have no teeth, they eat by sucking in zooplanktons and small fish with their large mouths that can open up to one-meter wide. They make ocean wide migrations and congregate in areas of high food density. No wonder, there are plenty of them at Oslob where they are fed.

Each whale shark has a unique pattern of white dots beautifully laid out against black top portion of their bodies. Scientists use these unique patterns of dots and lines to distinguish each individual whale sharks. In the Philippines, it is prohibited to kill and sell whale sharks and manta rays. These are protected species.

Starting at 5:00am, the crowd of tourists from all over the world are beginning to pack the shore to get a first-hand glimpse of these gentle giants. Oslob tourism has been thriving and had to turn away some tourists who arrive as late as 9:00am because those earlier arrivals are given 30 minutes each group to watch on board the small outrigger boats. 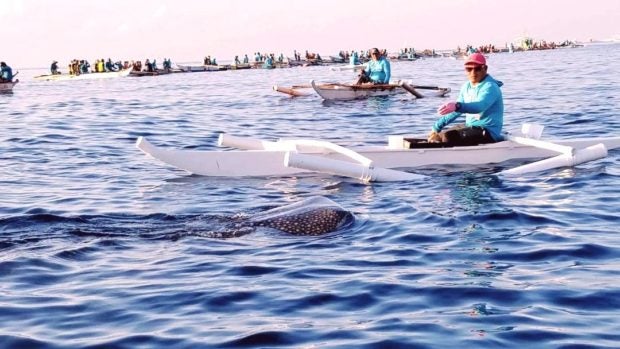 Feeders are throwing pieces of fish and shrimp meat too close to the other boats so that this whale shark can easily crash against nearby swimmers. INQUIRER/Carol Tanjutco.

Oslob guarantees whale shark sighting because fishing boats routinely feed them while spectators are positioned in outrigger boats. Unlike its counterpart in Donsol, Sorsogon where the whale sharks are bigger and are not fed but survive in the wild, divers get the opportunity to find these giant whale sharks only at certain time of the year. Environmentalists believe it is more sustainable practice not to feed the whale sharks and let them get nutrients from the sea.

In Oslob, the rules and penalties of fine and/or imprisonment are announced as part of the briefing. No touching of the fish is allowed and no swimming closer than five meters to the whale shark. The smaller bancas feeding the whale sharks are positioned not too far away from the shore, while the tourist boats arrive forming a circle around the feeder. 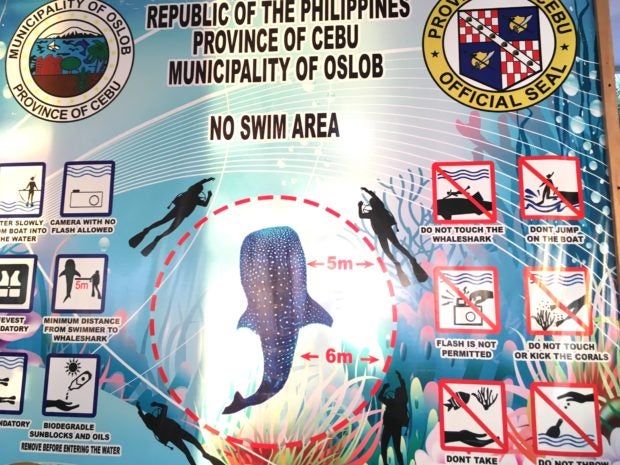 Rules are displayed on large board and announced before swimmers are allowed to board the outrigger boats for a 30-minute viewing. INQUIRER/Carol Tanjutco.

Notably, these outrigger boats have bamboo floaters, the tips are sharp which could harm the giant fish. It can be observed that the food given to the whale sharks are thrown about a meter away from the boat and these pieces of fish meat are floating under it so that the whale sharks are actually swimming and flipping around next to the boat. With a massive body size, the fish may be unintentionally touched or poked by the sharp bamboo floaters.

Driving back to Cebu City promises a lot of fun stops, shopping for the famous chicharon (pork crackling) from Carcar, dried mango chips, danggit  dried fish and pusit (dried squid), or sampling of native lechon (whole pig roast). If you plan to bring them to the United States, make sure you get the blister-packed products without the stench of fish smell. To be safe, these items are also available at the airport shops. 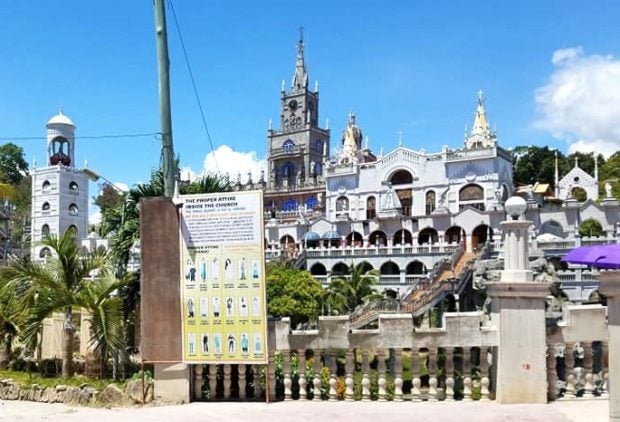 Not too far from Oslob is the famous Simala Shrine at Sibonga, it looks like a castle perched on top of a hill. Make sure you bring church clothes; no shorts, no sleeveless top, or else, entry will not be permitted. The Virgin Mary at the shrine is said to be miraculous. Scarves are sold outside the church for those who come unprepared, and cotton skirts maybe rented by devotees who do not want to miss entering the shrine.

Visiting Cebu is not complete without seeing old friends, like the former Ambassador and Permanent Representative to the United Nations at New York, retired SC Chief Justice Hilario Davide Jr, whose son, Hilario Davide III, is the Governor of Cebu. The Davide family graciously entertained this writer with her group of friends from New York at Hai Shin Lou Seafood King Restaurant housed at the posh Marco Polo Hotel. 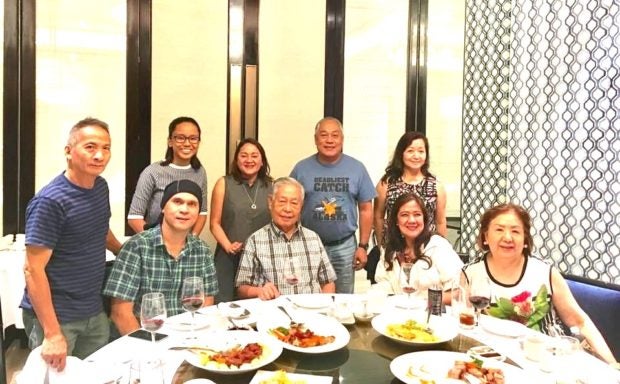 Finally, a trip to Cebu is not complete without a visit to The Chocolate Chamber’s Casa De Cacao, the home of Raquel Choa, who was recently profiled at CNN (https://youtu.be/kx8ExQ6XLeA) for making Cebu a chocolate destination. It will be recalled that she represented the Philippines at the United Nations’ chocolate festival in 2016, with a demonstration of her cacao de bola making.

Today, she explores new ventures by introducing cacao lava spa at Indira Spa, Summit Galleria Hotel, next to The Chocolate Chamber cacao shop. The Summit Galleria Hotel manager Gretchen Belleza gives good deals for groups. It is an ideal location for visitors, it has a private entrance from the hotel to Robinson’s Galleria. The Cacao Lava Spa will be out in all branches of Grand Royal Spa at Cebu this month, and will soon launch in the United States.

Cebu as a tourist destination is fast rising as a global choice. TripAdvisor recently announced the 2019 Travelers’ Choice awards, Cebu/Visayas Island made it to Top 25 Best Destinations in Asia. In 2017, Conde Nast magazine named Cebu/Visayas Island as the Second Best Island in Asia, after Boracay. Cebu has consistently made it in the top choices of travelers around the world.

Governor Hilario “Junjun” Davide III noted, “Cebu province is a showcase of white sand beaches, crystal clear waters, various heritage sites and ecotourism destinations that many of our fellow Cebuanos depend on for livelihood. With countless tourism awards and recognitions that earned for Cebu its rightful spot in the international tourism scene and led to the surge of both foreign and local tourists, we recognize that much still remains to be done to ensure its sustainability.”