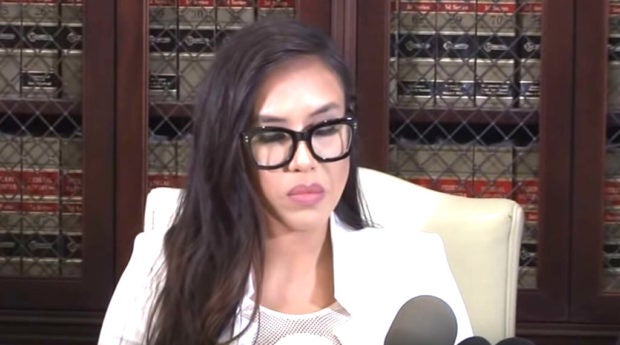 LOS ANGELES — Bulgarian heavyweight boxer Kubrat Pulev has been indefinitely suspended from fighting in California after he kissed a Filipina American reporter during an interview that was caught on camera.

Jenny “SuShe” Ravalo, a sports and entertainment reporter for Vegas Sports Daily, was interviewing the boxer after his win in Costa Mesa, California when he grabbed Ravalo’s face and kissed her, as seen in the video footage posted online.

After obtaining high-profile lawyer Gloria Allred as her attorney, Ravalo said at a following news conference that the Pulev’s kiss made her feel “uncomfortable and frustrated.”

In the statement by Ravalo posted to Allred’s Facebook, Ravalo added that after the interview, Pulev again touched her inappropriately.

“Next, I walked to the table to put my items in my backpack.  He grabbed both of my buttocks and squeezed with both of his hands,” said Ravalo.  “Then he walked away without saying anything to me and laughed.” Screengrab of Puvlev kissing Ravalo without her permission.

“I did not encourage, nor consent, to Mr. Pulev grabbing my face, kissing me, or grabbing my backside,” Ravalo said at a news conference on Thursday, March 28.

“I was there at the event, covering the match as a professional member of the press.”

In response to the publicized video, Pulev denied that Ravalo found the kiss offensive and said they were friends.  The two reportedly had just met for the first time the day before.

“The reporter, Jenny, is actually a friend of mine,” said Pulev. “And after the interview, I was so elated, I gave her a kiss.”

He added that Ravalo joined him and his friends at a post-celebration fight.

“There really is nothing more to this,” wrote Pulev.

Responding to Pulev’s statement in a news conference, Allred said that whether or not they were friends was irrelevant.

“Even if it were a situation where he was her friend, which he was not, he would still need permission to kiss her on the lips,” said Allred.  “A woman has the right to consent or say no. She was doing her job.”

On Tuesday, April 1, Pulev told German publication Bild after reports of his suspension by the California State Athletic Commission (CSAC) that Ravalo’s allegations were “not true,” adding that Ravalo was not his “type.”

“I’m not afraid — I also have videos if necessary,” added Pulev.  “I have [been at] no fault and have done in my career already tens of thousands of interviews.  Everyone knows me as a friendly and polite person.”

Pulev’s team did release video footage of Ravalo partying with his team after the fight.

Following Ravalo’s allegations, the CSAC said that it would “take this incident seriously.”

“Before he will be licensed to fight in California again, boxer Kubrat Pulev must appear in front of the commission and demonstrate that he will conform to this principle of respect,” said CSAC Deputy Director of Communications Veronica Harms.

The next CSAC hearing is slated to take place on May 14 with Ravalo expected to attend.