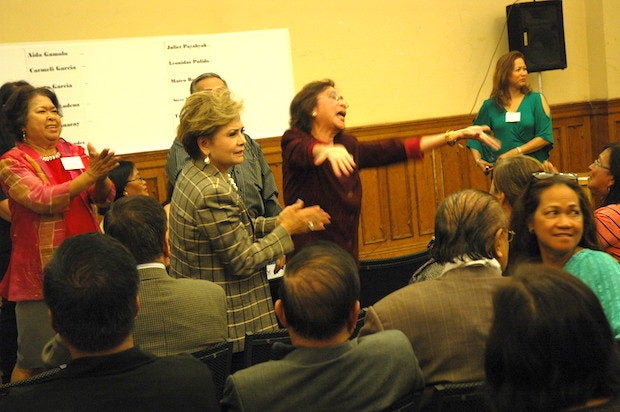 Juliet Payabyab (with raised hands) rousing her supporters to speak up and protest the results of the 2017 elections. RICKY RILLERA/PDM

NEW YORK – “Lutong Macao,” reacted Loida Nicolas-Lewis to an email sent to her by Juliet Payabyab about the recently ratified amendments of the By-laws of the Philippine Independence Day Council, Inc. (PIDCI). With a vote of 16-5, member-organizations ratified all proposed amendments.

Although there are 101 members of the PIDCI as of March 20, 2019, 20 members are required to be present to vote according to Rely Manacay, chairman of the Committee on By-Laws Amendments and Committee on Elections. “Twenty-one members were present in that meeting,” he said. “That was in compliance with the By-Laws.”

Attached to Payabyab’s email to Lewis was Alex Esteban’s version of the minutes of the General Assembly meeting held at the Kalayaan Hall of the Philippine Center.

Lewis accused PIDCI of being “(T)raitors to the spirit of PIDCI’s when its By-Laws were ratified in 2003” and that “the Board succeeded in making the PIDCI their own fraternity/sorority where membership is a privilege and not a right.”

She encouraged Payabyab to send Esteban’s report to two community newspapers. Lewis is chairman of the US Pinoys for Good Governance. She has been accused by President Duterte’s administration of destabilization, which she has denied.

In her email to Lewis, which the Philippine Daily Mirror has obtained, Payabyab acknowledged that Esteban sent her a draft of the minutes for accuracy “on dates and some important details” before it was finalized and added that she was “sharing it, too, to my own circule (sic) of leaders” including two members of the Fil-Am Press Club.

Payabyab also informed Lewis that Laura Garcia of Silliman University Alumni attended the meeting as an observer. However, the organization did not qualify to vote as “Silliman did not renew their membership.”

She added that Garcia should have not been given a renewal form this early as registration forms are mailed in August. “Hope this part will not be leaked as being given too advance to one particular organization instead of inviting all this early to renew. That could come up as another issue sooner or later,” Payabyab wrote.

This latest episode of what appears an anti-PIDCI sentiment or “smear campaign” as some members of the community call it, comes on the heels of New York State Supreme Court’s ruling last February dismissing Payabyab’s appeal to re-argue their case. The case was first dismissed in 2018.

Payabyab lost in the October 2017 PIDCI elections. Thereafter, she spearheaded the filing of a case against PIDCI in November 2017. Olivia David, who ran for the presidency but lost, did not join Payabyab in the lawsuit.

Payabyab and her co-complainant, Nieva Burdick of the Philippine Community Center Services for Aging, reportedly spent a sizeable amount of money to pay for the lawsuit and their lawyer.

Although Payabyab had a following in her quest to go after PIDCI and its board members, there were also people who raised concerns about her handling of the affairs of United Mindoro International and the Philippine-American Communities Executive Council (PACEC) under her presidency.

They questioned if she were compliant in providing members with regular financial reports and minutes of their meetings and if a quorum was properly observed. In addition, they also criticized her for having been a perennial president of both organizations all these years.

“Her situation is similar to those who voted against the amendments, except Esteban,” they said. “They have remained immersed as presidents of these organizations for quite some time and have not learned to let go.”

On a separate occasion at the Philippine Center attended by several community organizations, Lewis also criticized the PIDCI and called for an ad-hoc committee to run the Independence Day commemoration and parade.

Although representatives from the PIDCI were also present at that gathering, they did not respond to Lewis’ accusations; instead, the PIDCI issued a statement clarifying the issues raised by Lewis and Consul General Claro Cristobal.

Other quarters of the community also took a stance on Lewis’ apparent backing of “anti-PIDCI” adherents and said that Lewis’ support of an event organizer in the community who holds annual awards “smacks of double-speak if not hypocrisy.”

They said that Lewis knows of the person’s alleged misdeeds – owing money to many people in the community including the New York State Treasury for back-taxes – and who also allegedly has not provided a financial report to several investors. 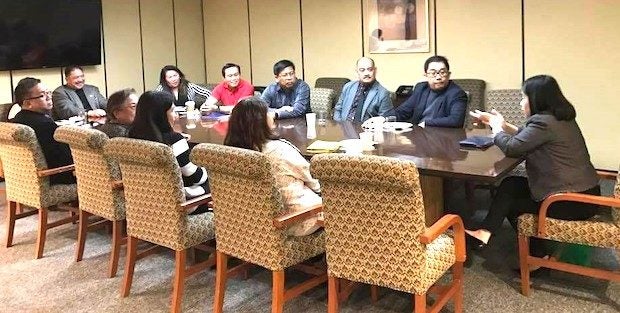 “People have raised these issues to her. Why isn’t she confronting this person with the same spirit when she talks of PIDCI?” they asked.

PIDCI meets with the Consul General and staff

Meanwhile, Rely Manacay, chairperson of the Committee on By-Laws Amendments and Committee on Elections, said that prior to the general assembly meeting, PIDCI had met twice with “ConGen Claro (Cristobal), DCG Erwin (Tate), Consul Arman (Talbo) and staff to discuss amendments.”

“There were plenty of discussions and suggestions from them but the notable changes recommended by them, among many things, were the creation and composition of members of the Finance Committee, the composition of the Members of the Committee of Comelec and General Membership Committees,” Manacay said.

With regard to the process of amending its By-Laws, Article XIV, Sections 1 to 3 stipulate such provisions which all member-organizations are supposed to know and observe. Section 1 speaks about who may propose amendments and how and when these are submitted to the Board for consideration; Section 2 is about action by the Board; and Section 3, is about ratification. These provisions were in effect since 2013.

The notice of the General Assembly meeting to approve the amendments was sent to member organizations on February 16, 2019.

“If they were serious with their complaints, why have they not raised these issues before March 20? Why have they not invited as many member-organizations to this meeting themselves to vote against these amendments?” said Manacay. “That is not a failure on the part of the PIDCI. As members of the Board, we simply followed the By-Laws.”