To bribe or not to bribe for college admission

To bribe or not to bribe for college admission

Richie owns several apartment buildings and other businesses in Pampanga and is legally married to a woman. The couple is well-off, albeit in a not filthy lucre fashion.

The wife was pregnant with their first child. “Hinding hindi tatapak sa lupa ang mga anak ko,”ina similar tone my father said to my mom before we were born, she claimed. I often overheard her tell her friends when I and my medical doctor brother were growing up. 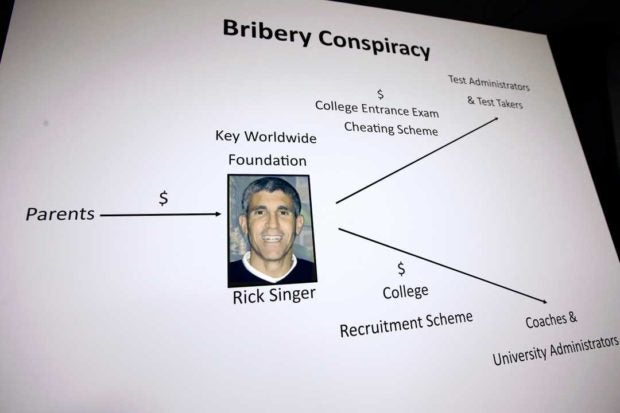 “Mag-aaral sila sa La Salle, Letran, Ateneo, St. Scholastica, Assumption (my children will be well provided, will study in elite school,” haughtily declared Richie to my mom, during a business-social visit where I tagged along as her driver.

After many decades, this scene comes to mind upon reading the recent big news about the college admission scandal, which could possibly be the biggest bribery scandal in American college history.

Almost 50 individuals, including more than 30 parents, have been indicted by the U.S. Attorney for allegedly conspiring to get underperforming students into some of the country’s most prestigious colleges and universities.

Parents, including celebrities, used bribes ranging from a few thousand dollars up to $6 million, or a whopping 312 million pesos (1:52 rate of exchange). Is it worth it?

Empirical observations indicate that college admissions (frankly, any human struggle promoting “equality”) should be based on merit and hard work, intelligence, diligence, and hard-earned credentials rather than wealth or lineage.

However, my kibitzer jack-of-all-trades-analyst friend quipped, “Money is the root of evil, education the root of development.” Would combining evil and development hurt?

Going to any college has two main purposes:  enhance prospects for career success, which likely equates to monetary and material wealth; and acquiring social status, prestige, fame, power and glory.

One would think that the rich and famous would care less than the rest of us about securing a spot for their children in elite colleges. After all, their kids are likely to be financially secure no matter where, or if, they go to college.

It seems the primary purpose of those indicted in this case was for “social status”?  This is akin to the psychic secretionwe learn in the Pavlov’s dog experiment in general psychology. Mere ideation or association can trigger observable physiological reaction, which I can prove below.

Imagine a slice of greenish-raw mango from Bataan… top this with a teaspoon of bagoong(a Filipino paste-condiment made from fermented anchovies or small fish), savor the flavor… now… take a bite. This explains psychic secretion:  salivation by ideation. (Caveat: this might be observable among Filipinos only).

Is this what a few want for most of us to feel because they are Ivy Leaguers?

College is college — some schools have more to offer than others; but in our life, we are going to meet plenty of useless dingbats who went to the most distinguished colleges in the country. We will also encounter wizards who barely went to school at all, wrote Jason Gay in the Wall Street Journal.

The reality, however, is wealthy and privileged people have always had an educational leg up, like Richie. With money comes access to the best neighborhoods and the best schools with the smallest class sizes and richest resources and best teachers.

With money comes better tutoring, test prep or review, enrichment and after-school activities, all of which provide avenues into top colleges, writes Danielle Braff of The Washington Post.

Somehow, college is not for everyone. Bonnie Goldstein writes in the USA Todaythat it cost him $50,000 to figure out that his son did not want to go to college.  His son got a half dozen acceptance letters who even let him choose which school was best for him!

When the son got there, he threw up during the orientation and spent his whole first semester never attending a class. Goldstein later admitted: To succeed in college, even kids with limitless advantages have to wantto be there.

High school years are supposed to be a developmental and exploratory periods for career planning. A student is expected to seek knowledge, get some insight on how to reach firm scholastic commitments.

When parents are willing to bribe someone to admit their children to Ivy League schools, they are risking their reputations and wealth because they would be committing an illegal act. Is it worth it?

We are reminded that, instead of pointing fingers at the parents or celebrities who leveraged their wealth to give their children a big, albeit very unfair, boost, who is to say that some of us would not do the same if we had the money and the power to ensure our child’s education?, inquired Danielle Braff of the The Washington Post.

If you are really rich, you are going to have a leg up; you will be able to have the financial wherewithal to affect the outcome in ways that families with lesser resources would not, stated Audie Cornish on an NPRtalk.   This is the way it is always been, particularly at elite schools.

Elite schools do not have two lines, one for ordinary applicants and one for the wealthy. They will say that you get in based on your test scores, grades and your recommendations and so on.

The overall percentage of alumni who donate to universities is dwindling.  So, schools are very dependent on big donors, the kind who give enough money to secure an admission.

Jared Kushner, President Donald Trump’s son-in-law and senior adviser is among those whose college admission seems to have been helped by contributions by a wealthy parent, hints a 2006 book “The Price of Admission: How America’s Ruling Class Buys Its Way into Elite Colleges — and Who Gets Left Outside the Gates.”

Meritocracy is when one’s “power” stems from one’s own knowledge, abilities, aptitudes, interests, talents, efforts and achievement, rather than on race, gender, age or wealth or behest opportunity. But meritocracy is an illusion, bluntly statedJason Gayof The Wall Street Journal; because long before an application shows up at a school, the system is legitimately stacked in favor of the wealthy. Children who are not from privileged backgrounds are at a steep disadvantage, simply because they cannot afford the add-on accoutrements.

How many parents are actually buying their children’s admission into college?   Again, according to Jason Gay, there is a hallowed tradition of admitting the mediocre spawn of the moneyed. On many campuses, you will find inspired buildings bankrolled by the families of uninspired brains.

There is the rub.  If you look closer inside some privately own academic institutions, you may be greeted by wall-to-wall plaques emblazoned with names of philanthropic donors, from the richest to the filthy rich and famous or elected politicians. Many represented names are likely bestowed with academic awards; some are elected as trustee or board members, or conferred with honorary degree of sort. The façade it represents of course is legal, so we are told.

If you attended school at the University of the Philippines (UP) main campus, you may have heard through the grapevine, Anak na nang presidente, na kick-out pa…” (In spite of being a president’s daughter, she was “kicked-out.”

The president’s daughter was not actually ‘kicked-out,” UP students protested her graduation, demanded to show proof of her academic records. Records indicated that she lacked 35 units and appeared have never had the proper qualification to enter school.

Records also show that her name does not appear on the approved graduates list, nor was she among the candidates endorsed by the graduation committee at the time, writes Ricardo Manapat in the book, Some are Smarter than Others, in 1991.

Eat your heart out, Ivy League.

Dr. Carson-Arenas is a Certified Clinical Psychology Specialist, and a former university research director. He is a Behavior Analyst Specialist in Nevada, an educator, clinician, researcher, consultant, and a published author. Dr. Carson-Arenas is finalizing a book entitled, “You’re Okay, I am Perfect (Teens, Adolescents and Those in Between Searching for Identity)” for Kindle readers.  Please e-mail at: [email protected]

LATEST
Solon wants PWDs with mobility impairments included in home vax drive
New Zealand PM sets out plans to reconnect with post-pandemic world
Turkey calls on Muslims to take clear stance over Gaza
Israeli president warns of civil war as Jews, Arabs clash over Gaza
‘We are fed up’: Thousands pray at Portugal’s Fatima shrine for world without COVID-19
MOST READ
usa Dogecoin price prediction – will it rise back?
usa How long do hardboiled eggs last?
usa On May 13 – remembering Our Lady of Fatima
usa Anti-Trump Republicans threaten to form third party
usa WHO recommends how we can stop the next pandemic
usa Healthy Keto air fryer recipes to try
usa Shows like Game of Thrones